As it turned out, Tishomingo State Park was right down the road from the high point--or it would have been, had I not made a right where the sign said to turn left and spent 15 minutes following a gravel road to its end in the Mississippi countryside. Suspecting my error, I did an about-face (well, more like a three-point turn) and backtracked to the main road, where signs for Tishomingo beckoned from across the street.

That park, I must say, was a pleasant surprise, one of only two places on this whole south-central tour I'd care to revisit (along with Mina Sauk Falls in Missouri).

I arrived around midafternoon (on Thursday the 12th, for those of you who like to keep track of dates) and found the park nearly empty--and all the other folks were in RVs, so I had my pick of tent sites. While registering at the front desk, I mentioned to the ranger that I had been to the high point. She apologized for the lackluster display up there--apparently there had been more signs and such, but they'd been taken down due to persistent vandalism. This is why we can't have nice things.

Rather than return to my campsite by the road, I took a trail through the park. The hiking brochure promised rock outcroppings, and the trail delivered.

There were squared-off cliffs above the creek, 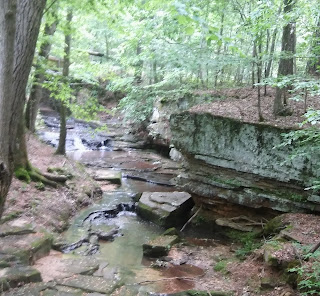 and more. Who'd have expected such interesting rocks from the Delta State?

By the time I reached my campsite, the sky was threatening a thunderstorm. Rather than set up my tent just to have it rained on, I spent the rest of the afternoon in my car, reading another of the books from Georgia. The storm never hit the park, though; all we got were a few stray raindrops and some rumbles in the distance. I finally pitched my tent around sundown, stocking it with the same sleeping gear I'd used at Cheaha Mountain, then slid inside and kept reading until the light failed.

Halfway through the night, I was woken by maniacal screaming in the woods. I froze, listening carefully to the sound. Where was the source? Was it coming closer? 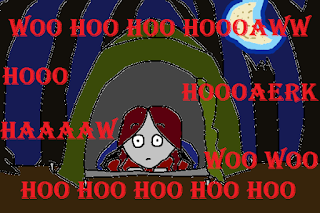 The sound continued--WOO HOO HOO HOOOAWW!--seemingly unaware of my presence. My fear faded into curiosity. What in the world was making that racket? Raccoons? Foxes? Coyotes? Or, I realized, it could be some sort of owl. Not every species makes that soft, polite "Hoo, hoo?" you hear in movies. (Nor does every diurnal raptor scream like a red-tailed hawk. Bald Eagles, in fact, sound pretty silly.) This park was home to tons of other birds--I'd heard all kinds of chirping and honking in the evening--so why not owls? Thus mollified, I rolled over and went back to sleep.

Turns out I was right. I checked my field guide in the morning and decided by process of elimination that I'd probably heard a pair of Barred Owls. ID confirmed when I got back to Internet-land and looked up their cry. Those things sound scary as hell--who'd think a bird a foot and a half tall could make a noise like that?

Inspired by my find, I took a walk around the lake that morning before leaving to see what else I could find (both bird- and rock-wise). 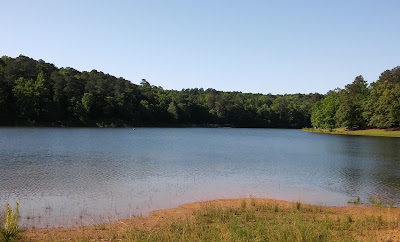 My route didn't pass any more outcroppings, but I did see a heron, a few Canada Geese, some Barn Swallows, an Eastern Kingbird, several finches and sparrows, the ubiquitous American Robin (I swear I've seen those things at every single destination on this trip), and a strange beast I can only describe as a "guck."

I found those three napping on the lakeshore. On the left is a Canada Goose, on the right is a feral domestic duck, and in between is the Guck himself. Doesn't it look just like a cross between the other two? The trio were remarkably tame, so I crept closer:

What was that thing? Was it really a goose-duck? Had I just discovered the world's first example of inter-genus hybridization? Unfortunately not, said the Internet. That bird was just another farm escapee, a Chinese Goose, and the basal knob above its bill is a normal feature of the breed.

So there you have it. If you're the sort of person who can tell apart tanagers in flight while clinging to a sheer rock wall, Tishomingo State Park is your next vacation spot. If not, well, just don't get freaked out by the owls.