Though the winds in the valley rattled my tent's cover all night (the same way a curious bear would, I imagined), I slept much better than before. I woke to find the sun already risen--maybe, just maybe, I thought, I'm getting the hang of this "camping" thing. While the morn was still young, I broke camp, loaded up my car, and headed out.

I took a twisty two-lane road up and out of the valley, then hustled westward down I-40. There was no time to lose; on this beautiful, sunny Saturday morning, with quite unintended timing, I was headed for the Great Smoky Mountains Tourist Tra-... er, National Park.

Full disclosure: I hate the Smokies.

I hate the crowds they draw and the resultant scale of the place: the oceanic parking lots, the two-hundred-site campgrounds that still, somehow, don't have soap in the bathrooms, the cars that limp down the park road at thirty miles an hour with five others piled up behind them. But most of all I hate the commercial build-up that lies in ambush at either entrance to the park, waiting to suck you straight back into the noisiest and tackiest features of civilization the minute you leave: the souvenir shops, the cutesy motels, the roadside attractions peddling gimmicks and fake "adventures" and cheap plastic trinkets. On the Tennessee side it borders on obscene--I've driven once through the neon abscess of Gatlinburg, Pigeon Forge, and Sevierville, and I never will again. The approach from North Carolina is merely annoying.

There is a certain charm, I'll admit, to the high green hills of the Qualla Boundary, the Cherokee reservation that surrounds the park's southern entrance. If only the roadside wasn't dotted every hundred feet with signs for "Santa Land" (thankfully, that Christmas-themed park was closed for another few weeks) , an observation tower overlooking the "Most Photographed View in the Smokies" (so why should I pay to go up and take yet another picture of it?), and stores selling all manner of T-shirts and antiques and Indian kitsch. Ignoring it all, I pressed on to Cherokee, the town at the heart of the reservation, then turned north towards the park. Get in, get the high point, get out before the rush--that was my goal.

The Smokies are split down the middle between North Carolina and Tennessee. Clingman's Dome, high point of both the park and Tennessee, lies just west of that border. I'd hiked the peak before, following the AT up the ridge from Newfound Gap, but I didn't feel like repeating that long, largely featureless hike the day after climbing Mt. Mitchell, so I went for the typical tourist experience and drove to the summit.

The instant I passed park boundary, the forest closed in around me like a shutting door. Gone were the billboards, the lights, the commotion of town. All that remained was the two-lane park road, gently curved as though it didn't quite trust you not to slip off and disappear into the thick, dark woods on either side. There were much fewer cars than I'd expected, given the season; then again, if Mt. Mitchell (fifty miles northeast and a mere 40 feet higher than the Dome) was any indicator, things were still quite frosty at the park's high peaks. I followed the road past the visitor center (a sign warned of elk, but the biggest beasts I saw were two wild turkeys pecking at the roadside grass), past that overlarge campground, past a handful of trailheads, numerous pull-outs, and, as it reached the mountains proper, dozens of overlooks.

At Newfound Gap I turned onto the seven-mile spur road to the Dome. The first snow-patches soon appeared, at just about the same altitude where I'd found them on Mt. Mitchell. They thickened predictably as I ascended.

"Dome" is another one of those curious South Appalachian mountain-terms, this one referring to a mountain with a gently rounded peak. Though the term evokes granite domes like Yosemite's Half Dome or Stone Mountain, GA, Clingman's Dome is nothing of the sort, just another spruce-fir summit.

The parking lot up top--Smoky-sized, of course--was only a third of the way full when I arrived, but filling fast. I parked at the periphery of the crowd, threw on my down jacket, and emerged into the elements.

Joining me was by far the biggest crowd I'd seen on any high point yet: families, a tour bus of students, motorcyclers in denim jackets, international travelers conversing in their native tongues. Most appeared to be caught off-guard by the snow; an unfortunate few wore only shorts and flip-flops. They shivered in the brisk wind that blasted the mountainside.

Having arrived by trail last time, I'd forgotten about the half-mile ascent from the parking lot to the summit. The path was paved but very steep--and, to my surprise, uncleared. Tourists' feet had done the job in most places, but in others I had to hop between footprints to keep my sneakers from sliding on the slush. Ironically enough, the smoothness of the pavement made it more slippery than a rocky trail would have been.

I passed some nice views on the way up:

and the junction with the AT.

There were a handful of thru-hikers among the crowd at the observation tower, easily identifiable by their unwashed hair, weather-appropriate outfits, and the oversize packs they clung to like security blankets. I hope they enjoyed the summit, the highest point along their trail, because they've still got over 1,900 miles to walk before they reach Katahdin.


For all its crowds and traffic and inherent inferiority due to being in the Smokies, I must admit that Clingman's Dome has twice given me what Mt. Mitchell refuses to: clear weather at the top.

So I took my pictures for the Larvitar family album, 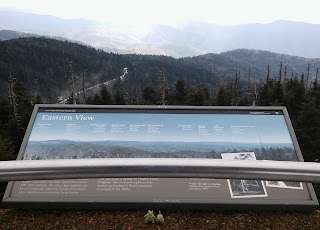 climbed a little boulder beside the trail, 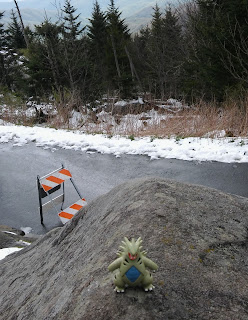