People these days expect things to be instantaneous, or as nearly so as physically possible. And why not, when all the information of the Internet can be theirs for a few finger-taps, when it’s odd if an online purchase doesn’t show up at one’s door within a few days, when cars shoot in straight lines from city to city at 70 miles per hour. Speed and access is the norm; they want it all, and they want it now.

Well, mountains don’t quite allow for that, especially those as dense and jumbled as West Virginia’s. One can blow a hole through a single ridge, a la Sideling Hill, to put in an interstate, but it would take nukes to flatten West Virginia’s terrain into tractability. A road allowing consistent travel at 40 mph is a feat of engineering there. Similarly, each cell tower’s reach is limited to the valley it overlooks… well, most of it. If the valley’s scant population warrants a tower at all, which it probably doesn’t.

I mention all this to explain why, not long after leaving Seneca Rocks, I found myself stranded with no cell coverage and only a blurry, half-loaded Google Map to point me towards my destination.
I drove south down US-33, one eye scanning the roadside for labeled streets and the other watching the purple-faced, pickup-trucked maniac behind me to make sure he didn’t ram my bumper in his haste to round the 30-mph curves at 45. A likely road appeared at last; I made a right. Free at last of Taily McGateson, I wound my way leisurely up into the mountains…

…and up, and around, and down, and up some more. The road turned to gravel. A succession of farms faded in and out of view, then vanished altogether into the forest. No sign of Spruce Knob—or anything manmade at all. This clearly wasn’t the right road. But it was too narrow to turn around, so I continued on, watching the needle on my gas gauge dip closer to empty with every swell of the road. At last I spied a stop sign—O glorious symbol of civilization!—through the trees. I came to a halt, glanced up and down the cross street (it even had two fresh-painted yellow lines running down it!), and realized it was 33 again. I had circled all the way around to the north side of Seneca Rocks.

So I retraced my route through town, down the highway, past that red herring of a road, and up the correct one to Spruce Knob. It slithered up the mountain like a snake trying to spell its name in cursive: leaning in towards the mountain in a tire-burning switchback, then swinging out again as if to throw you off. My hands didn’t leave the wheel once in all the twelve miles up. 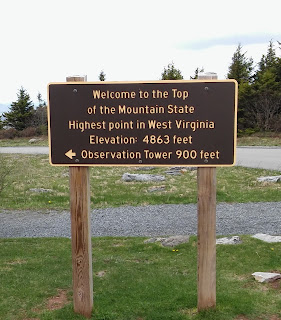 After all that, the summit itself was somewhat flat and underwhelming. Like Mt. Davis, Spruce Knob is a flat-topped mountain. Being a good 1650 feet higher, the vegetation was quite different: we were firmly in an alpine biome of firs and grasses and lichens. 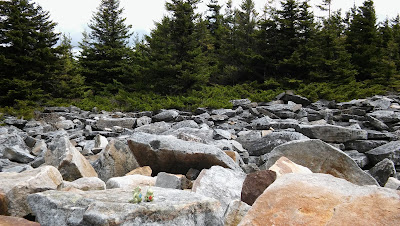 A nature trail led down a ways to the high point itself, which was topped with a stone observation tower: 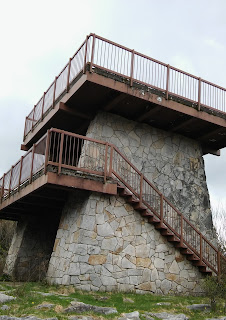 I snapped a few pics up there, but found much better views after following the trail a bit further along the mountaintop. 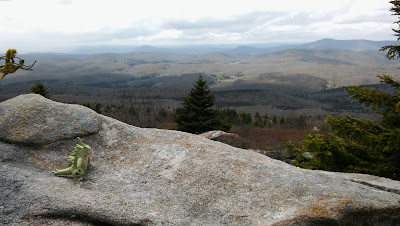 The trail rounded a bend, and what to my wondering eyes did appear but a huge field ringed by boulders!
There was one with pockets, one with a crack, one with a near-invisible set of ledges running up the side like stairs, and even one shaped like a grazing cow.

So the boring summit held a hidden treasure after all. I climbed all the decent sized ones (except the cracked one), then followed the nature trail back to my car and drove on.