I had been warned that the trailhead for Hoye-Crest, Maryland (a summit along Backbone Mountain, which extends into West Virginia) was hard to find, but I lucked into showing up right as another party was heading up the trail.


I parked right behind them, then hustled uphill to catch up to them on the trail. They were [spelling approximate] Krystal and Rianna, students from nearby Gannett College who were hiking to the high point for a math assignment. Our paces up the hill quickly diverged, so I passed them and went on ahead.

The mile-long trail up Hoye-Crest is a splendid example of how the difficulty of a hike is much more a function of its slope than of length alone. Halfway up the trail I was sweating hard, wondering how many more of the 700-foot elevation gain I still had to climb. Who would have expected a miniature Mt. Mitchell in Maryland?

(As a rule of thumb, any trail with over 500 feet of elevation-change per mile will be a strenuous hike, comparable to running that same horizontal distance at a moderate pace. 1000 feet per mile gets into Stairmaster territory—for that, you’d better be in shape and ready to scramble up rocks.)

At the top, I was rewarded with a bench, a sign, and a chance to sign the summit register. 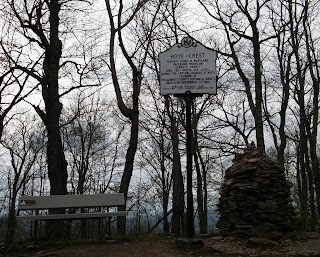 The Lars were disappointed by the lack of rock outcroppings, but they thought the summit cairn was tasty. 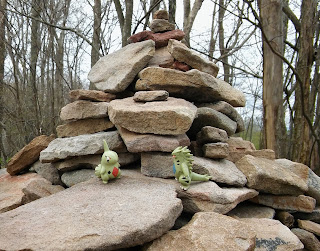 I took in the view, 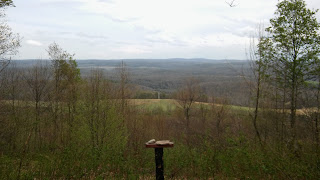 scrambled down a side trail to the state line marker, 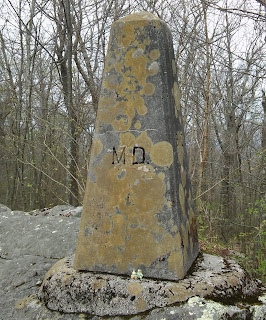 Not far from the summit, in a canonical example of the Intermediate Value Theorem, I met Krystal and Rianna on their way up. Rianna was too tired to keep going, so Krystal asked if I could accompany her to the summit, since she wasn’t used to the woods and didn’t want to go alone. Sure, I said, glad to help a fellow highpointer. So we backtracked up together. She was amazed by the view up top—it was her first time summiting a mountain, which was fun for a mountain geek like me to see… a flashback to that summer day when someone coaxed tired little me up that last stretch to Kennedy’s Peak, where I caught the bug.

I followed her down until we met up with her friend again, then hustled down in the hopes that I could get to West Virginia before the campgrounds closed.