In retrospect, Florida was a turning point in my trip. Out of the Appalachians, the high points were lower and the drives between them longer. I went from hiking an average of five miles a day to driving an average of six hours, from shivering in the alpine cold to sweating through my shirt in a hot, airless car, from marveling at mountain panoramas to squinting at road signs. At first I welcomed the change, but as the miles stacked up and my legs went from rested to restless I began to wonder why I was doing this. What bizarre calculus had urged me to drive all those hours through the middle of nowhere just so I could walk a few hundred feet up a hill and stand atop a state best known for its flatness? Completionism? Stubbornness? A desire to "pick off the easy ones" (fueled mostly by laziness but also, more sinisterly, by self-doubt)?

No matter, I suppose. I did it, and it's done, and I don't ever have to do it again.

In all fairness, this leg of the trip wasn't entirely without value. I saw places and things I don't reckon I would have ever seen otherwise (i.e. Arkansas), got more practice driving on twisty mountain roads, added a few birds to my life list (though not the Ivory-Billed Woodpecker), and gained deep insights into the life of a long-haul trucker.

But let's return to the story at hand.

The first thing I noticed after crossing into Mississippi was how red the ground was: the dirt, the rocks, even the pavement:


(As I learned at the high point, this was due to traces of iron in the local sandstone). Other than that, there wasn't much of a difference between Mississippi and Alabama, nor between it and Louisiana across the river: the roads were no worse, the neighborhoods no shabbier, the natives no less intelligent. Those other states might "thank God for Mississippi" when the states are ranked, but there, but for a demographic accident, go they.

Fortunately for me, it wasn't long from the border to the base of Woodall Mountain, the state's high point. At that point I'd been driving for half a day down straight, flat, rural roads and was in dire need of both air-conditioning and stimulation. I didn't expect the mountain could help me with the former, but perhaps the latter? 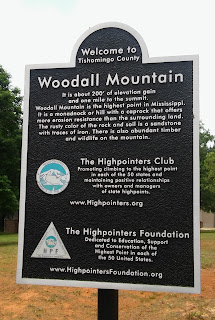 Not especially. Woodall was no more than a glorified hill. A gravel road ran from the street to the summit, rising 200 feet in its mile-long meander through privately-owned forests. Wary as ever of my car's capabilities on unpaved roads, I left it beside the street and walked to the top.

The forest along the way seemed quite homogenous after the diversity of the Appalachians: 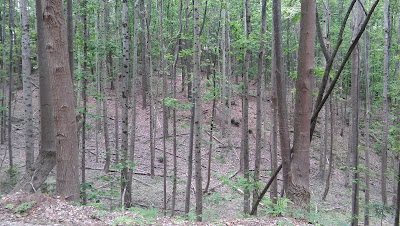 Signs along the road marked it as the property of the Tombigbee Hunting Club, a local organization.

There wasn't much to see at the top. The summit area was dominated by a couple of radio towers: 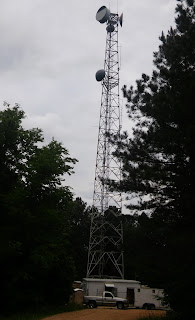 from which a handful of workmen in pickup trucks came and went. Trees screened the hill, blocking off any view it might have had of the surroundings. The high point itself was marked by a stone: 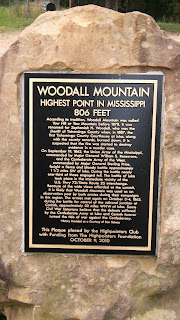 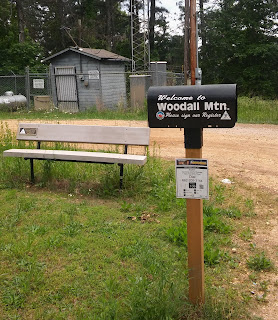 I climbed the stone, signed the register, and retreated down the trail.

Halfway to the car, I was startled by a loud whoosh-whump-whop noise in the woods. I ducked, thinking it was some kind of pneumatic weapon (May isn't hunting season where I come from, but who knows when they hunt in Mississippi?), but it was only a flock of vultures. I, in turn, had startled them away from their supper. They lingered in the nearby trees as I passed, then flopped back down to their carcass and chowed on.

The rest of the hike passed without incident. There wasn't anywhere to camp at the high point, so I drove south to Tishomingo State Park, the nearest blob of green on Google Maps, in search of a site for the night. Along the way, I passed a billboard in a field that said nothing but "Jesus is Life”—this was the Bible Belt, all right.