The four-hour drive down to Florida was uneventful. Cheaha Mountain was fairly remote, so I passed through several small towns before I rejoined the interstate. Forestry seems to be a major industry in northern Alabama; for a while I followed a flatbed truck piled high with raw pine logs.

Around 3:30 in the afternoon (on Central time now), just after crossing the state line, I spotted a sign for "Florida's Highest Point." I'm surprised the turn was labeled at all, but if any state could be proud of a point less than 400 feet above sea level, it would be the Swamp Sunshine State. So I turned down the road and soon arrived at Lakewood Park, home to the (in)famous Britton Hill. 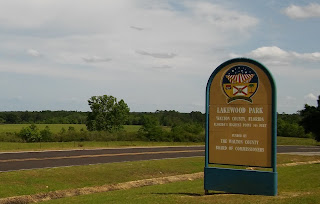 I hadn't expected much. A slight rise, a few meters' hike, perhaps even a bit of a view. But nope. Lakewood Park was nothing but a roadside park, flat as a pitcher's mound.

A lawn, a pavilion, some picnic tables... the whole place could have been transplanted straight from the Northern Virginia suburbs. The most formidable thing about it was the wall of sprinklers blocking my path to the highpoint marker: 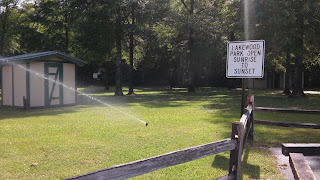 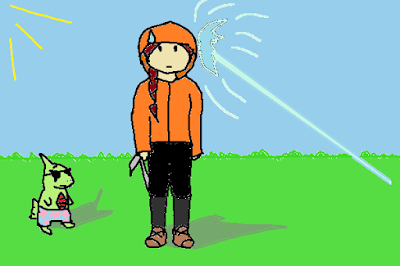 Thus equipped, I braved the storm and walked the 50 feet to the monument: 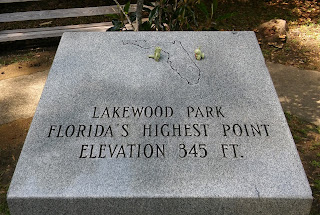 where the Lars had their treat for the day: glazed rock!

I hung around for a bit to sign the summit register (which was surprisingly devoid of snark--I suppose Britton is a Hill in the eyes of the locals) and read a display of clippings from the Highpointers Club's newsletter. There wasn't much to see aside from the high point, though, so I soon traveled on...

...to a motel room in Crestview, FL, where I finally took that shower I'd needed for days.