On my way from Spruce Knob to Staunton, I made a brief stop at a place I'd been before, a little interpretive-history trail just west of Staunton on US-250. The Confederate Breastworks trail shows off the remains of Fort Edward Johnson, a mile-long ridgetop trench built by the Confederate army in anticipation of a Union advance from the west. Not much is left of the trench, as you can see: 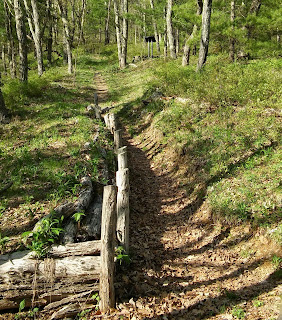 Signs along the trail feature letters from a soldier, First Lieutenant Shep Pryor, to his wife back home in Georgia. His regiment spent all spring camped up on that mountain, suffering through snow and cold and disease to build that fort and defend Staunton--a city he'd probably never heard of before he was positioned there. Like many other men on both sides, he didn't make it home from the war.

But nature heals itself. Trees regrow, trenches fill in, and bullets disappear into the soil. Now it's hard to imagine war ever came to such a peaceful place. 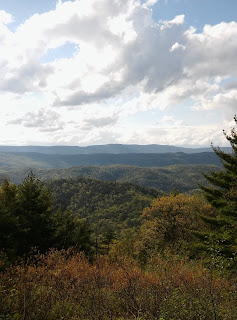 Email ThisBlogThis!Share to TwitterShare to FacebookShare to Pinterest
Labels: side trip, VA