I woke up the next morning to the sound of torrential rain pounding on the roof of my motel: 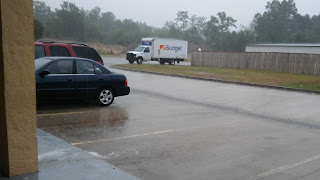 So much for visiting the beach that day. I ventured out to the front desk and extended my stay another night, then holed up in my room and spent the rest of the day working on blog posts. For you, my faithful readers, all for you.

The next day's weather proved much more amenable. After a morning of revision sleeping in, I ducked out just before check-out time and headed for the coast.

But to get to the beaches, I had to cross the bay... and to cross the bay, I had to pay the bridge-trolls their toll. Yes, yes, public works cost money, and infrastructure won't maintain itself, especially when it's built of steel beams suspended over a body of salt water, but... toll bridges.

This one wasn't as bad as others I've driven, only the price of a cheap lunch (rather than dinner-for-two). I forked over the cash and drove out over the expanse of beautiful blue water, over which glided flocks of seabirds in their chaotic courses as boats cut contrails through its glassy surface, and--who am I kidding, I kept my eyes on the road. A watery death appealed neither to me nor my Rock-type passengers.

But then, towards the end of the bridge, the water rose up to meet us...

...in the form of the muraled walls of Legendary Marine.

I took the place for an aquarium, but it's apparently a boat dealership and yacht club.

Beyond that building lay the streets of Destin, FL--in all respects, a typical resort town. Some family friends had recommended the beaches; an obscure techno song had sung of the sunsets, and, perhaps most importantly, the place was just south of the high point. So here I was, hoping to catch some waves at the low point of my journey.

The campground of the first park I tried, Henderson Beach, was full, so I followed US-98 east to my alternate, Topsail Hill State Park. Theirs, too, was full, but at that point I was rather out of options, not to mention roasting in my car, so I bought a day pass and hopped out to see the sights.

It was a mile from the entrance to the beach. A tram ran at the top of the hour, but rather than wait for it I just started walking. The road took me past the campground (duly full of RVs, tents, and sunburnt swimmers), through a bright, beachy forest of longleaf pines, 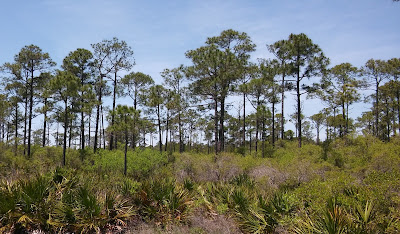 and to a boardwalk stretching over the dunes, built to protect the delicate habitat from tromping tourist feet. 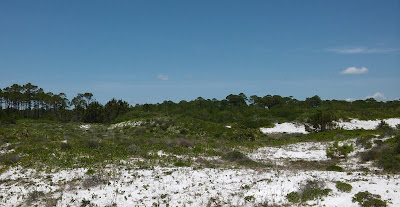 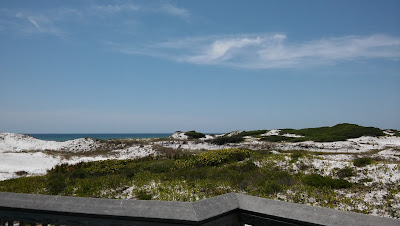 And there it was, the beach.

I've always been astounded by the sheer length of the seashore. It stretches on for miles, a narrow transitional ribbon in which every slice across its width is more or less the same: loose sand turns solid, then dark with moisture, then loose again as it joins the ocean's roil.


The Lars, in turn, were astounded by the sand. Powdered rocks? they marveled--for they'd never seen anything of the sort.

And thus the true horror of the shore came crashing down upon them: everything there is super-effective against them.

But I wasn't about to let their distress keep me from a swim. I tucked them away in my pack, then backtracked to the bathhouse to change into my suit... barefoot.

The nice thing about Gulf Coast beaches is that the sand is so white it barely absorbs any heat from the sun. Though darker sand fries my feet, I'd shucked my shoes at the start of the sand and walked all over this beach without pain. The same, unfortunately, couldn't be said of the boardwalk: 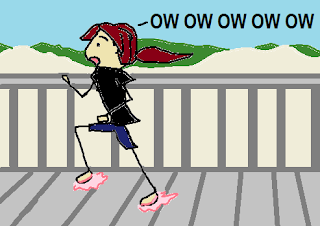 I tried to return by an alternate route, a wheel-track through the dunes, but it vanished halfway to the beach, leaving me to scramble over the loose sand and prickly beach-plants. 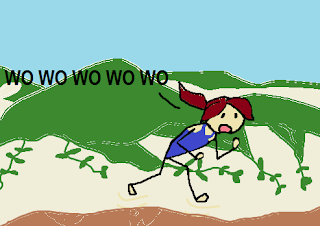 But I made it, thankfully without drawing the ire of the park staff, and spent a good hour splashing in the surf. The water was no colder than my hometown swimming pool; the waves were high enough to be interesting, but not so high as to freak me out (I'm a landlubber through and through, in case you can't tell by my mountaineering blog).

As I lay drying on the beach, I looked up at the sky and realized that within the summer, I'd be 14,000 feet above this point. I squinted up into the blue. Would I even be able to see myself from that far away--nearly three miles higher? And then it all caught up with me: all the miles to be driven, all the words to be written, all the rocks to be stepped over.

I'd come a long way already on this trip, but I had much longer still to go.

And so, when I was dry, when the faint prickling pain of sunburn overcame the pleasure of the seaside, I got up, brushed off as much sand as I could, and returned to my car. I backtracked through the evening, across the panhandle and up again through Florala, Georgiana, Fort Deposit, and continued on the next morning past Montgomery, Birmingham (which has quite the morning rush hour, by the way), Moulton, Muscle Shoals... and then, after seven hours of sun-beaten driving, into Mississippi.