I rolled into Seneca Rocks, WV that evening with an hour of daylight to spare. At first I wasn't sure if I was in the right place, but then I looked up:

The Rocks is one of the top outdoor rock climbing sites of the East. Climbers come from all over the country to scale the nearly four hundred routes up the quartzite crags, which range from beginner-level to some of the most technically challenging climbs out there. My plans were decidedly less ambitious, however: to spend the night beneath the rocks at the appropriately-named Seneca Shadows campground en route to the WV high point.

By the time I got there, though, the campground was closed, as was the Rocks’ visitor center.
I backtracked in search of food, expecting I’d need to sleep in my car that night. But while browsing the wifi that came with my meal, I discovered a miraculous place just down the road that charged for camping by the tent… $8 each! I was used to shelling out a one-size-fits-all $25 for a glorified patch of dirt and access to bug-infested restrooms, so this sounded too good to be true. So I zipped over to Yokum’s Campground, arriving right before they closed, and bought myself entry. The place was nearly empty—it was a Monday night, after all—so I had my pick of spots.

I slept like a rock that night—that is, a rock right on top of the San Andreas fault. Drift off, wake up, shiver, roll over, repeat. Sleeping on the ground always takes some getting used to.

The next morning, I returned to the visitor center. It had a few nice exhibits on local history and ecology and such, but nothing that compared to the real attraction: the Rocks themselves.

And so I hiked up the gentle but steep 1.5-mile trail to the Seneca Rocks overlook, gaining 1000 feet in the process. I had hoped it would be an overlook of the Rocks themselves, but they were further along the ridge. Instead I was treated to this lovely view of the valley: 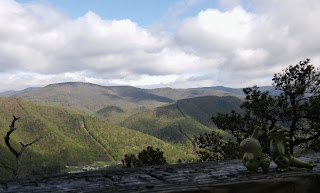 The trail ended a few dozen feet further in a panicky sign warning that it was DANGEROUS to climb past the sign, that the Rocks ahead were a knife-edge ridge LESS THAN TEN FEET WIDE(!) in places, and that FIFTEEN(!!!) people had fallen to their deaths from them. WHAT IF YOU—OR YOUR CHILD—BECAME THE NEXT?!? So I only climbed a little ways past the sign, stopping before I reached the knife-edge proper.  My mom would have been proud.

The Lars enjoyed the rocks, 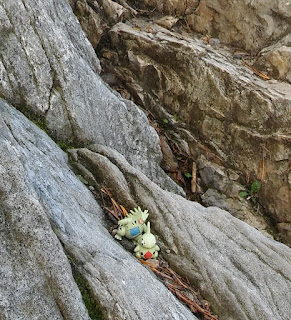 I enjoyed the views, 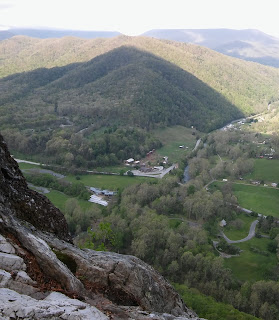 and the flock of warblers passing through the trees enjoyed taunting me. They kept perching right in front of my camera, tweetling their little songs, then darting away right before I could get my camera app open. I definitely saw a Black-and-White Warbler, though, and a yellow-gray one I didn’t recognize (my attempts to ID it afterwards were stymied by the fact that half the warbler species in North America are yellow and gray). 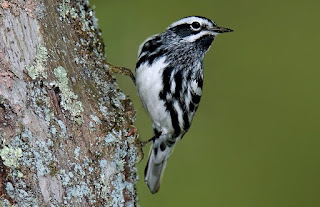 On my way down I passed a party of climbers, recognizable by the rock helmets strapped to their packs. Inspired by their example, MomMom and I scaled a nice little boulder just off the trail.

I scanned the cliffs for them once I returned to the parking lot, but I didn’t see them. Perhaps they’d gone around to the other side.

After a quick lunch (thanks to Derek for the chocolates!), I drove on to Spruce Knob. 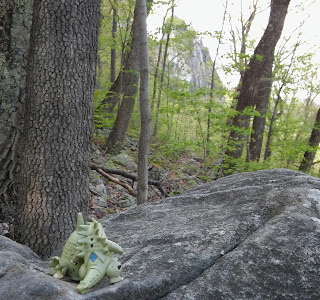