I’m on the road now! Since I have limited access to both the Internet and writing time (I’m out here to see the mountains, not to pen the next Great American Doorstop), expect these posts to be more terse and photo-heavy. They’ll also be somewhat time-delayed (again, due to limited Internet access)—so keep in mind that everything described in these posts has already happened, most likely days ago. If you’re reading it, I survived it.

I set off from home on the 2nd under hazy gray skies, heading for the Pennsylvania high point by way of Maryland. Conditions stayed overcast until just after my car summited the first ridge (passing right beneath the Appalachian Trail), when they cleared up almost immediately. There’s a shining example of mountain weather for you.

I stopped for lunch along I-68 at the dramatic road-cut through Sideling Hill, MD.

The Lars thought the rocks looked tasty… but we couldn’t get close enough to see for sure (probably for the best, seeing as the interstate ran right beneath them).

That hill had been the bane of local motorists for decades, explained several signs at the visitor center, until the folks who built the interstate in the 1980s solved the problem with dynamite, resulting in the 300-foot high cliffs you see there. 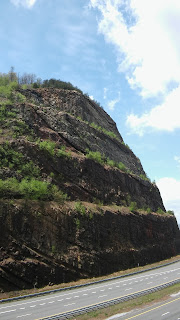 Not long after leaving the interstate, I got lost in the back roads of Pennsylvania farm country. It turns out some states are better than others at labeling their minor roads, and PA ain’t one of them. It wasn’t a bad place to get lost, though—the terrain was quite scenic, and I think I saw the farm where Land ‘o’ Lakes butter is… grown? made? extracted? And while turning around, I saw a horse-and-buggy coming up the road across from me, nonchalant as can be.

The Pennsylvania high point itself was a pretty low-key start to my trip. I arrived at a huge, deserted picnic area, then headed up a clear, if rather muddy, trail 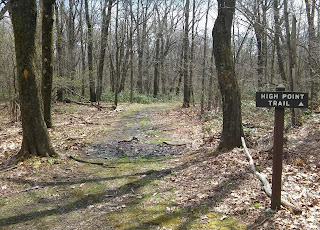 for a mostly-flat mile or so to the high point itself. 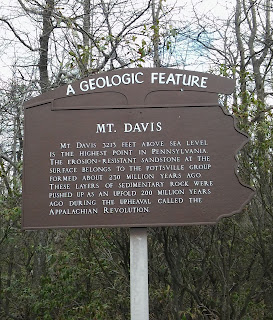 Mt. Davis is only a plateau atop the larger plateau of the Allegheny highlands, you see, so there wasn’t much of a view from the ground. The state of Pennsylvania made up for that, however, with several plaques on the rocks discussing local geology and history. It’s not the world’s most exciting high point, but they’re clearly proud of it. I climbed the observation tower for a better view and was rewarded with this: 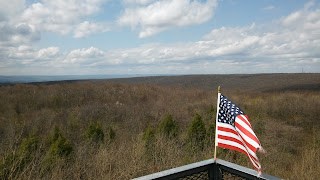 After that I climbed down and continued on to Maryland. 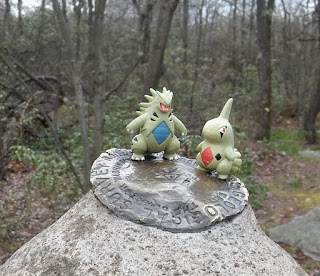