Hoo boy, was it a mistake to skip dinner.

Not only is it amazing how fast you lose heat when you stop moving on a mountain, it’s even more amazing how fast the temperature plummets when the sun goes down. Though I’d stocked my tent for the night below Mt. Rogers with my sleeping bag (rated for comfort at 45 degrees F), my brand-new liner (touted to add an additional 25 degrees to the bag’s capability), a self-inflating ground pad (which had barely had time to inflate in my hasty setup), all the clothes I’d worn on the hike, and my own exhausted, meal-skipping, horrifically naïve body, it was no match for the chill and the winds and the wintry mix  that blasted the gap all night long. I might have drifted off to sleep once or twice… maybe… only to wake again mere minutes later, shivering like a seizure patient. I threw on every stitch of clothing in that tent, pulled the sleeping bag over my head, even covered my face with my down jacket to seal in the heat of my breath, but nothing worked. Either my body couldn’t produce enough heat to stay warm, my gear couldn’t hold in the heat, or both.

I roused myself at last when the light grew strong enough to make out the red of my sleeping-bag liner, and found the forest engulfed in fog: 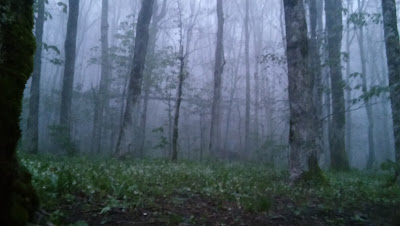 My tent’s rain cover was drenched with droplets—unfrozen, unbelievably—and the bottom was covered in mud and flecks of leaf-litter. I shook it out as best I could, then rolled it up wet (with half-hearted promises to spread it out to dry as soon as I got where I was going) and packed it away. I waited a while longer for the fog to clear, then, when it didn’t, drove down the mountain anyway in search of central heating and a proper breakfast. Luck was with me, for the fog disappeared only a few hundred feet into my descent.

I backtracked to Chilhowie, stopped for food, and, despite my lack of sleep, set off down 81 once more towards the Kentucky line. What else was I to do but carry on?

Stop for a nap, apparently. By the time I reached Abingdon I could barely keep my eyes open. I pulled into a church parking lot (hoping they’d be too Christian to tow a weary traveler) and conked out for an hour.

When I awoke, I found a family of Killdeers squawking just outside my car. America’s most widespread sandpipers are certainly loud little fellows. I watched through my binoculars as the mother ushered her wandering offspring through the parking lot, then continued on my way.

I spent the rest of the morning driving down the long goose-neck of Southwest Virginia. Though I’ve lived my whole life in Virginia, I had never been to this part of the state. Bright-green hills sprang up like rows of teeth in every direction. One-lane roads threaded the valleys between them, linking sporadic houses and trailers and farms.

The road up Black Mountain was long and twisty, rather like the one up Spruce Knob. It peaked at a high pass atop the mountain, home to a gravel parking area, a few private roads, and a pair of “Virginia/Kentucky Welcomes You” signs marking the state line. Looking out from the parking area, I saw a mountain in the process of being strip-mined… 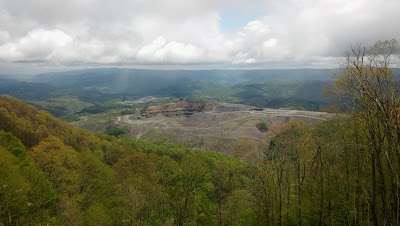 …a stark reminder that Kentucky’s high point lay on private land held by Penn Virginia Resource Partners, according to the waiver I’d been instructed to sign and carry with me during my visit. It asserted that I entered their property at my own risk, would not interfere with any commercial activities occurring on the property, would not assert that the property was, or should be considered, a public park (does this count?), and agreed to stay on the designated road to the high point.

That road, a mangy-looking half-paved, half-gravel thing, ran for a mile and a half along the ridge. I probably could have taken the car up it, but I’m glad I didn’t for my suspension's sake. Plus the walk up, though a bit chilly, was just the right length to stretch out my muscles after yesterday’s exertion.

I’ve heard the southern Appalachians called the “seed cradle of North America” for their role in preserving plant diversity through the recent ice age. When the ice sheets descended from the north, plants retreated to these mountains, then spread to reclaim the continent once the climate warmed again. The diversity still shows, from the canopy to the undergrowth; one can find more species in an acre of forest here than in entire ecosystems elsewhere on the continent. Even a peak as impacted as Black Mountain had plenty to offer: 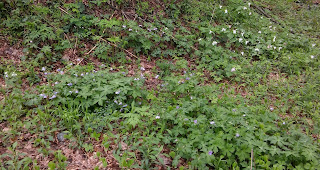 I was pelted intermittently all through my walk by more of last night's hail (though it wasn’t all that bad now that I was actively awake. The hailstones stayed small, never larger than coarse-grained sugar). It even briefly turned to snow while I was at the high point:

All while walking, I was a bit concerned to be there. The mountain was home to several radio towers, including one that carried FAA air-traffic broadcasts. What if I was challenged by the workers? Would that waiver be enough to secure my passage? Fortunately, no one up there seemed to care. Two pickup trucks passed me on their way down; I greeted them, waiver in hand, but they didn’t so much as slow down.

And as I returned from the high point, I realized something. It’s good when states use their high points for the benefit of their citizens, right? Most states use theirs as publicly-owned recreation areas—but that’s certainly not the only acceptable way to use them, nor is it necessarily the most beneficial in every case. The towers atop Black Mountain, though commercially owned, are serving Kentuckians. It’s not that the state of Kentucky is irresponsible or negligent for leaving their high point in private hands; they’re just using it differently. And as long as the owners continue to allow access, we really can’t fault them for that.

Tired out from my walk, I drove down the mountain, then continued on to Burnsville, NC, where I got a motel room and a pizza. After that wretched night on Mt. Rogers, and after days of being alternately bear-aware and a clean houseguest, I was ready to once more enjoy one of life’s greatest pleasures: eating in bed.