Later that week, my friends and I drove out to a little trail not far from the shores of Ocoee Lake, a hydroelectric reservoir on the western edge of Cherokee National Forest. My friend from Chattanooga had taken me up this way before; he recommended it again as a short, gentle hike that would fall within our joint athletic ability (there's a reason I only took one of these friends up Roan Mountain). 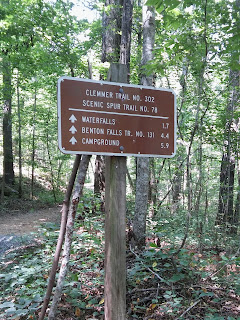 As you can see from the sign, the Clemmer Trail's main attraction is a pair of waterfalls along Rock Creek, one of the many mountain streams that feeds the lake. The area is also frequented by mountain bikers, though we were fortunate enough to not run into any of them while traveling uphill.

The trail started off with a fairly steep ascent, but soon leveled off into a wide, flat creek valley. It continued thus for a bit under two miles: 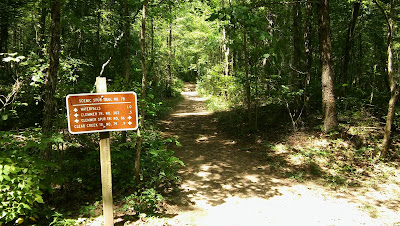 then, as the mountain walls closed in, it switched us back and forth across the creek until we came to the first waterfall:

Chattanooga--and my friend there--proved quite hospitable. My hiking buddy and I arrived at his place in the late afternoon; later that evening, another pair of friends from Northern Virginia joined us. We spent the next day resting from our various drives and lives, then turned in early that night.

Our plan for the following day was to drive up the Cherohala Skyway to the bald summit of Huckleberry Knob, the high point of the Unicoi Mountains. Though a thousand feet lower and much less prominent (both topologically and in terms of renown) than its northern cousins, the Smokies, that peak was smack-dab in the middle of the Great American Eclipse's path of totality. On any other day, it'd be a gentle 1.2-mile stroll from the Skyway--pleasant, no doubt, but hardly worth a ten-hour drive--but for two minutes and thirty-eight seconds, starting at 2:35 pm on Monday, August 21, 2017, the sun above that mountain was going to disappear. And we planned to be under it.

The Friday before the 21st, a friend and I headed south from Northern Virginia, hoping by our early departure to beat the worst of the eclipse-weekend traffic. As far as I know, we did, but there were still about twice as many accidents as usual along I-81 southbound through the Valley. Things cleared up somewhat once we hit the plateau west of Blacksburg, and they stayed that way until Bristol...

...where our route happened to take us past the Speedway on a race day. The two-mile stretch of US-11 running past it was lined with parking lots, carnival tents, and streams of pedestrians homing in on the racetrack. Even if that 162,000-seat stadium was only half full (which it might well have been; the night's race was only a minor one), it held a crowd one-sixth the size of the population of the Bristol-Kingsport-Johnson City region, all of whom had turned out in their best on that drizzly summer evening to watch a bunch of cars drive loops around a half-mile track. I guess you have to grow up out there, in NASCAR country, to get it.

My friend and I, however, drove on by. Our reason for detouring off the interstate lay further down the road, up US-19E among the western slopes of the Blue Ridge--which, after a summer wasted in the flatlands, looked so rugged and green and beautiful that I could barely keep my eyes on the road. But I did, and shortly before dusk we arrived at the base of Roan Mountain, a twenty-mile ridge along the TN-NC border home to three peaks above 6000 feet and the longest grassy bald in the southern Appalachians--and conveniently located two-thirds of the way to Chattanooga, our base of operations for the eclipse.

The campsite I'd reserved in Roan Mountain State Park, one of only three available when I'd picked it out two days before, turned out to be an RV site: