Chattanooga--and my friend there--proved quite hospitable. My hiking buddy and I arrived at his place in the late afternoon; later that evening, another pair of friends from Northern Virginia joined us. We spent the next day resting from our various drives and lives, then turned in early that night.

Our plan for the following day was to drive up the Cherohala Skyway to the bald summit of Huckleberry Knob, the high point of the Unicoi Mountains. Though a thousand feet lower and much less prominent (both topologically and in terms of renown) than its northern cousins, the Smokies, that peak was smack-dab in the middle of the Great American Eclipse's path of totality. On any other day, it'd be a gentle 1.2-mile stroll from the Skyway--pleasant, no doubt, but hardly worth a ten-hour drive--but for two minutes and thirty-eight seconds, starting at 2:35 pm on Monday, August 21, 2017, the sun above that mountain was going to disappear. And we planned to be under it.

That morning, I woke in the predawn darkness to the buzzing of my phone's alarm. I tapped my friends awake, then ventured down the road to fill the tank of my old Accord. By the time I returned, the friends were up and ready to load the car. A cooler full of food, a case of water bottles, all three tents and four folding chairs owned among the five of us--rumors of road-blocking traffic had us prepared to wait out the night on the mountain, if need be--and, at last, ourselves, filling the seats of the sedan.

We drove out around 7 am, heading north on I-75. The interstate seemed no more crowded than usual for that hour, our fellow traffic mostly trucks and in-state cars. We pulled off at Calhoun and followed a mix of state and US routes to Tellico Plains, the Tennessee endpoint of the Skyway.

A kindred spirit to the Blue Ridge Parkway, the Cherohala Skyway crosses the crest of the Unicoi, connecting Tennessee's Cherokee National Forest with North Carolina's Nantahala NF (hence its name). Lesser-known and less-developed, with no entrances or exits over the course of its steep, winding 43 miles, the Skyway passes through some of the most remote and untouched forest in the southeastern United States. Unlike in most areas along the eclipse path, where visitors would be crowding in on top of a local population, I'd figured that the only folks atop this mountain would be fellow eclipsegoers--some indeterminate but most likely small number--and thus this hill would be the closest we could get, east of the Mississippi, to solitude.

My local friend, though, had sharply disagreed. A bald with 360-degree views at the center of the eclipse path? Everyone and their mom would be trying to get there. In light of that, and of the potential for the no-outlet Skyway to morph into a parking lot under the pressure of hundreds of inexperienced lowland drivers, he wasn't even sure we should attempt the drive up. But as the date neared and our other eclipse-viewing options proved either less interesting or logistically infeasible, we decided to try.

As it turned out, we were both half right. The two-dozen-mile climb from the Plains to the Knob was smooth and steady going, the only car in front of us a local emergency-response truck on its way to some overlook along the Skyway. Each of the several parking zones we passed was packed; folks thronged around the overlook railings, some with tripods already set up for the viewing.

We crossed the border into North Carolina without incident, then curved around the high peaks of the Unicoi... and that's where the crunch began. For at least a mile surrounding Huckleberry Knob, and for a quarter-mile surrounding its smaller neighbor, Hooper Bald, the grassy shoulder was filled with cars parked end-to-end--and the tiny gap between those radii was closing fast. I drove past the commotion, then turned around at the first chance I got and tucked the car into one of the few remaining spots on the shoulder. 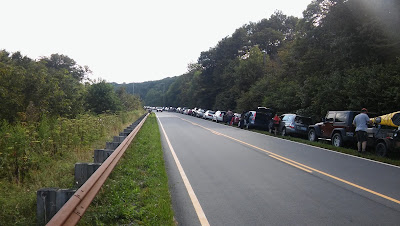 How had those hundreds of cars beaten us there? I wondered as we shifted our load from the trunk to our packs and trudged up the road to the Huckleberry trailhead. There couldn't be that much hotel capacity between here and Chattanooga, which is the largest city by far in southeastern Tennessee.

The answer came as we emerged onto the lower of the two balds on Huckleberry: most of those folks had camped there overnight.


And as we crossed that tent-city, I wondered whether we should have done the same. All the prime spots at the top of the hill were long since claimed, and what we could see of the upper bald looked even more crowded. But there was still plenty of space on the margins, as we discovered when we got there... provided we were willing to trample down the tall grass and thistles currently occupying it.

"Leave no trace," I know, but I didn't feel too bad about it. Grass and brush bounces back faster than just about any other ecosystem--so fast that they have to mow these balds to keep them from lapsing into thickets. Shame they hadn't thought to mow this one before the eclipse.

My friends and I picked out a spot halfway down the west-facing side of the hill, trampled down the high grass and thistles, and set up camp. I passed out the eclipse glasses I'd bought for us in bulk on Amazon. By 10:30 am, we were settled into this strange temporary city of tents and telescopes, sun-shades and pavilions. Nothing to do now but watch the sky and wait. 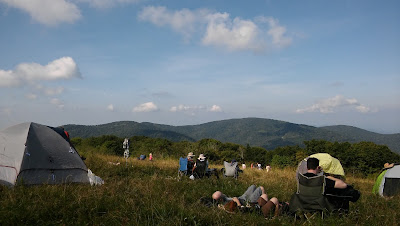 We kept busy through the morning with card games (my friends) and trips back to the car to fetch stuff we'd forgotten (me; toilet paper). The crowd grew, filling in the space around us. There was no rush--somehow, the arrivals spaced themselves out so that the road never jammed and the trails never clogged. There was only a slow convergence on the hilltop, the slow awakening of a collective entity, an audience.

And then, at 1:30 pm, the partial eclipse began. A shout rolled down the hill; we grabbed our glasses and scopes and looked up, eager to see the moon's first intrusion on the sun… then groaned and looked down. A cloud had just slid into the way.

We turned back to the ground, a new fear in our hearts. Had we gone to all this trouble--had we flown, driven, walked, hauled our things up this hill--the highest of a range the Cherokee named "White" for its concealing mists--had we bought glasses and telescopes and filters and cameras, had we slept in hotels, in cars, on unfamiliar couches, had we camped overnight, woken up early, braved the traffic--all for a cloud to eclipse our eclipse?

In the distance, full sunlight shone on Hooper Bald.

Some among us defected, then, crossing the col to the seemingly favored hill. We paid them little mind. The cloud above would pass, and if another followed after, so be it. We would remain; we liked our odds.

And pass it did, revealing a sun three-quarters gone. Behind it, the sky was clear and blue. 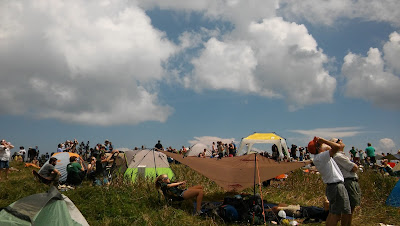 It was around then that we noticed the change in the sunlight: it felt more like the slantwise sun of early morning than the direct blaze it should have been. The temperature dropped. The white on our tents and shirts and coolers dulled, then faded to beige. A breeze welled up from somewhere. Insects settled down to sleep.

Once more we raised our glasses to the sun--

--which, as we watched, shrank to a fingernail clipping, then disappeared.

Faster than thought, the shadow came upon us; sunset descended from all directions. We doffed our glasses and looked out on a darkened world.

The sky above was indigo, not the night-black we'd been told to expect--the haze of the Unicoi at work. Just off center hung a white ring surrounded by interlaced arcs of light, all that remained of the vital star. The horizon burned with sunset on all sides, broken only by our hundred silhouettes, their hands upraised: waving, shouting, photographing, filming. 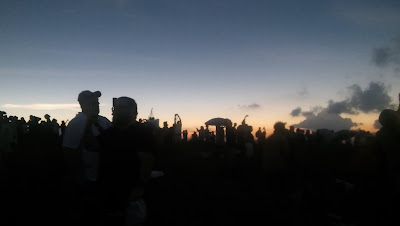 Clinging to each other, we stared in awe at the sun’s abandonment.

And then, two minutes and thirty-eight seconds later, a bead of light broke from the rim and grew. We blinked and looked away, fumbling for our glasses, and threw them back on just in time to see the first red shard of sun emerge. The darkness lifted; the hill erupted in cheers.

We watched the waxing sun a short while longer, but the moon's track wasn't half as gripping on its exit. The climax of the show had passed. The spell was broken; the lights had come back on; the audience regained awareness of their separation.

A man behind my friends shouted in exultation; he'd just fulfilled a lifetime dream. Others turned back to their phones, texting and tweeting the urgent news that the sun had not, in fact, gone out above Huckleberry Knob. Still others started packing up. 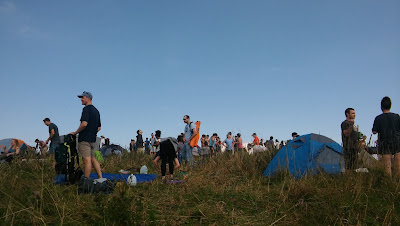 My friends and I sat right back down and set up an hour-long board game, figuring it would last us through the worst of the rush for the cars.

We figured right; by the time we were done, the hill was half-empty and the sun was nearly back to normal. We loaded up our chairs and backpacks, then set off down the hill at a leisurely pace, nodding politely to the few stragglers we passed. By 5 pm we were back at the car; a two-hour drive took us home to the city.

I'm sure that many of us who witnessed the eclipse from that hill would describe it as "unforgettable" or some such synonym. Yet I've wondered, in the days since, how well we will truly remember that eclipse. There are some stories pictures cannot tell, some that even words can barely approximate, invoking them only through faint empathetic echoes. Some feelings run beneath the conscious mind: primal terror at the absence of the sun, for one, and the unity of bearing shared witness. To pull such phenomena back even to the level of language, of ordered thought, is to dissociate from them; think how much further one must be to work an elaborate camera or to calculate the best angle for an #eclipseselfie.

Sure, we will have a record of that eclipse--more so, perhaps, than of any other solar eclipse yet witnessed by mankind--but how well will we bloggers and photographers remember how it felt to stand beneath it? Will we remember, at all, the emotions of those around us--their fear and joy and wonder, echoing and echoed in our own? Or will we recall only a static image: a white ring in the sky, just how the photos on the Internet say a total solar eclipse should look?

It's a paradox, really: some events leave a deeper mark when left unrecorded. As our capacity for storing and sharing data expands, perhaps we all--myself included--should take a moment to reflect upon it.