The Friday before the 21st, a friend and I headed south from Northern Virginia, hoping by our early departure to beat the worst of the eclipse-weekend traffic. As far as I know, we did, but there were still about twice as many accidents as usual along I-81 southbound through the Valley. Things cleared up somewhat once we hit the plateau west of Blacksburg, and they stayed that way until Bristol...

...where our route happened to take us past the Speedway on a race day. The two-mile stretch of US-11 running past it was lined with parking lots, carnival tents, and streams of pedestrians homing in on the racetrack. Even if that 162,000-seat stadium was only half full (which it might well have been; the night's race was only a minor one), it held a crowd one-sixth the size of the population of the Bristol-Kingsport-Johnson City region, all of whom had turned out in their best on that drizzly summer evening to watch a bunch of cars drive loops around a half-mile track. I guess you have to grow up out there, in NASCAR country, to get it.

My friend and I, however, drove on by. Our reason for detouring off the interstate lay further down the road, up US-19E among the western slopes of the Blue Ridge--which, after a summer wasted in the flatlands, looked so rugged and green and beautiful that I could barely keep my eyes on the road. But I did, and shortly before dusk we arrived at the base of Roan Mountain, a twenty-mile ridge along the TN-NC border home to three peaks above 6000 feet and the longest grassy bald in the southern Appalachians--and conveniently located two-thirds of the way to Chattanooga, our base of operations for the eclipse.

The campsite I'd reserved in Roan Mountain State Park, one of only three available when I'd picked it out two days before, turned out to be an RV site:


but we made do by encroaching onto our neighbors' site. They didn't seem to mind; they simply nodded to us and tossed more wood onto their campfire. Which wasn't all that welcoming of a gesture, now that I think about it, since the air in that campground--tucked into a tiny, poorly-ventilated hollow in the mountains--was already choked with the smoke of several dozen such fires.

The forest around us was interesting, though. It was composed of two distinct layers: a dark, thick crust of rhododendrons hugging close to the ground and a sparse cover of deciduous trees, mostly some sort of oak, growing through and over them. Just the sort of forest where one expects to come across a black bear at every turn.

But the bears must have shared my opinion of that valley's air quality. The only sounds I heard that night, as I drifted fitfully to sleep, were of latecomers hauling their rigs up the hill and our neighbors discussing car repairs in thick backwoods drawls.

At dawn, my friend and I broke camp and headed up TN-143 to Carver's Gap, a five-hundred-odd-foot dip between the three main peaks of Roan Mountain: 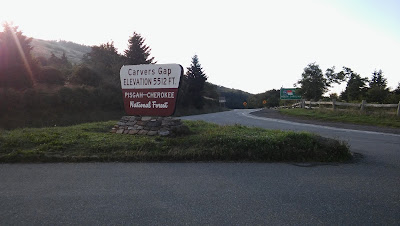 Our plan was to follow the Appalachian Trail southbound (west, in this case) over Roan High Knob (6286') to its slightly-shorter sister Roan High Bluff (6267'), then double back to the gap and hike an additional six miles to Grassy Ridge Bald (6189') and back. It was a lot of mileage to pack into the six or seven hours we'd budgeted for hiking that day, but there wouldn't be much elevation gain, since we'd started already at 5500', so we figured we could do it.

The AT up from the Gap was surprisingly well-maintained, with plank-and-wire bridges over the streams:


and black plastic netting on the slopes to hold the freshly-laid gravel in place. It switched us back and forth through the misty fir forest: 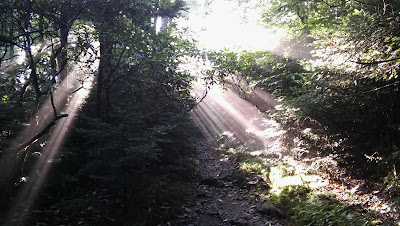 and up the side of the Knob.

After a mile or so, we came across the mossy remnants of a chimney:


I wondered, as we walked on, what kind of person would have made their home on this ridge. These highlands get snow from September to May, as I learned last year, and I can't imagine the soil's any good for planting. The scenic twenty-minute drive from the nearest town to the Gap must have been half a day's ride in pre-automotive days, if a road even existed from there to here. Who'd leave behind the shelter and community of the valley and haul all their other worldly goods up here to live?

Someone in search of hardcore solitude, I concluded--or someone who'd really ticked off the valley-folk.

Just before the trail dipped down again, we came to a spur leading farther up the mountain, marked with a sign for the Roan High Knob shelter. Would that take us to the summit? I wasn't sure how far we'd come, so I led my friend on, thinking we had yet to reach the Knob itself.

I realized I was wrong as we emerged onto the balds of Toll House Gap, which lies between the Knob and the Bluff:


A sign up there identified this gap as the former site of the Cloudland Hotel, a swanky little spot where folks could ride up from the cities and get drunk while watching the rhododendrons bloom in early June--but only on one side of the hotel. The line between North Carolina, a dry state, and booze-happy Tennessee ran straight through the hotel's salon, so they marked it in white on the floor and stationed the sheriff nearby to make sure no one crossed the line with a drink in hand.

After reading the sign, we traversed the bald and came to a parking lot: 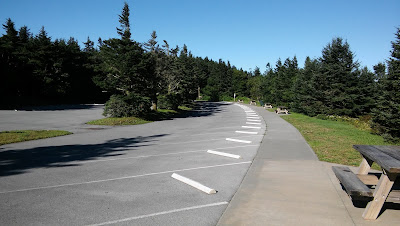 The trail to Roan High Bluff began on the far side of the lot. A few hundred meters in, it split off to an overlook, from which we got a glorious view north towards Tennessee.


But as we followed the trail westwards, past a bus parking lot (maybe some of those flower fans do get sloppy after all) and a half-mile turn-around loop (let's bring the racecars up here and see how they do!), the trail grew steadily thinner and rougher until we ended up, well...


We shoved past the plants, hiked on through a half-mile of increasingly cloudy forest, and arrived at a little round platform looking out into...


That's no lens-smudge; that's all we could see from Roan High Bluff. Looking down wasn't any more of a comfort:


nor to the side:


The overall effect freaked me out far more than a walled-in overlook had any right to do. I stood there at the railing with the wind blowing straight into my face and stared into the clouds, wondering what might be staring back at me, lurking that white nothingness, about to emerge...

But then my friend--a rather more prosaic fellow--called me back to the trail and to my senses.

As we headed east, I recalled that the true summit of the Bluff was off the trail a ways from the overlook. One's technically not supposed to go looking for it--they're trying to get the bluffside vegetation to regrow--but there was a pretty substantial desire-path headed up a likely-looking outcropping, so I followed it up:


After that, we retraced our steps down the (now-somewhat-muddier) trail:


back across the little bald:


and up the spur to the Roan High Knob shelter:


As my friend flipped through the shelter's log to see what all the thru-hikers had to say, I ascended the gradient to another outcropping: 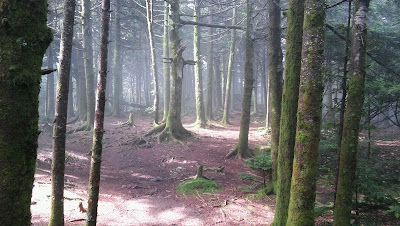 where I found a second plaque marking the high point of the Knob (and, thus, of Roan Mountain itself):


and crossed over to the bald side of the highway: 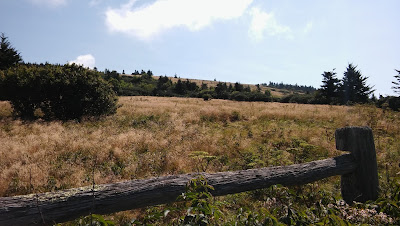 After a short break in the shade of an interpretive sign, we headed up once more:


The trail led us up the bald hillside, through a shard of forest, and out onto the summit of Round Bald (which, at 5800', is just a hair shy of being a Sixer--pun intended). The views in all directions were amazing, from the north:


After an appropriate period of marveling, we walked on, at least one of us humming the Rohan theme from The Lord of the Rings (as I always do when hiking through grassy balds).

The trail took us down into a gap: 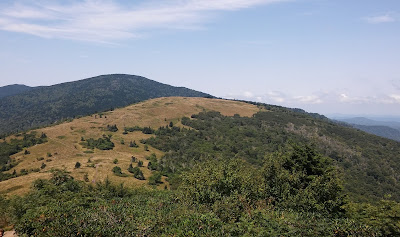 then down and up another little bald, just for fun. From there it wasn't far to Grassy Ridge Bald:


In between stood a steep, rocky slope overgrown with blueberries:


a tunnel of low rhododendrons: 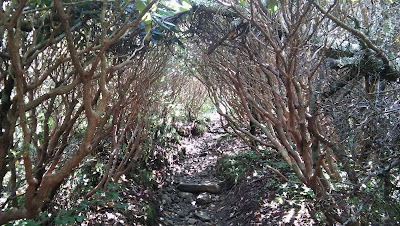 and a long grassy ridge:


We arrived at the summit shortly before some sort of youth group that had been trailing us for most of the way there. I took my pictures: 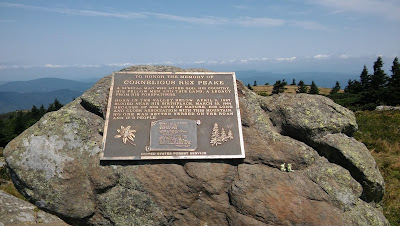 climbed that boulder--because I could, that's why--and recommended we head back. My friend was more than happy to oblige.

We stumbled back into the Gap around 1:15 pm, footsore and sunburnt and ready for a nice long air-conditioned drive. On to Chattanooga! 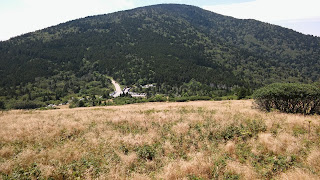