I arrived that Sunday afternoon at Cheaha Mountain State Park in northeastern Alabama. Cheaha, the high point of the state, and its range are the southernmost extension of the Blue Ridge, though miles of lowlands separate it from its northern cousins. Thus despite its relatively slight stature, Cheaha stands tall over the relatively-flat Heart of Dixie.

Given Cheaha's prominence (in both the technical sense and in renown), it's no surprise that the park was still quite crowded when I got there. Cars filled the parking lot at the entrance, and families clustered along the sidewalks. I parked in an area designated for campsite registrees, then dodged through the traffic into the park office.

I'd like a campsite, I told the girl working the desk.

Primitive or semi-primitive? she asked, in an absolutely adorable Alabama accent. Semi-primitive's a bit more expensive, but it'll get you access to the bathhouses-

Semi-primitive it is, I said, for in that crowd of pleasant-smelling day-trippers I was all too aware of my mountain funk. My last shower had been three days and 24 miles of hiking ago, and it showed.

The sites are $18 a night, she continued.

More than my sources had claimed, but on par with most campgrounds I'd been to. All right, I said.

The girl processed some paperwork, then handed me a map, a tag for my car, and the bill. That'll be $23.36.

She shook her head and explained, with the nonchalance of someone who'd been through this many times before, that there was a $4 "convenience fee" on top of the campsite fee, plus sales tax, so the total came out to...

The campsite in question was a half-mile up the park road, then down a spur that ran past the high point and along the ridge of Cheaha. The site was small, steep, and rocky, but pleasantly forested and equipped with a picnic table and a pump I could never quite get working. The mountain dropped off steeply on both sides of the road; pieces of its panorama poked through the gaps in the trees. 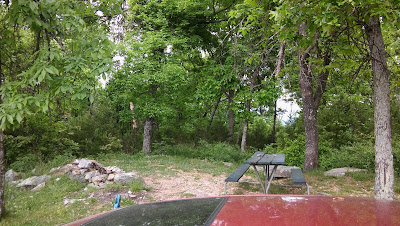 Once I was settled in, I traipsed uphill with the Lars to complete my pilgrimage. The summit of Cheaha was dominated by an old stone observation tower built by the CCC. 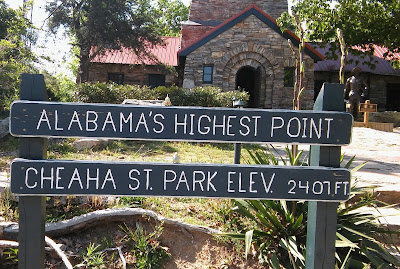 I climbed up to see the view, 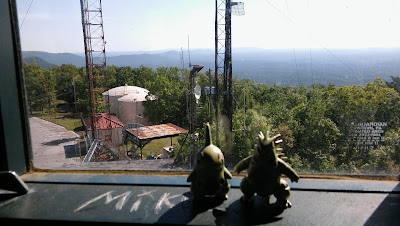 but the windowpanes were so small and thick that the viewing was awkward.

Wandering around the summit lawn, I came across some boulders for the Lars to munch: 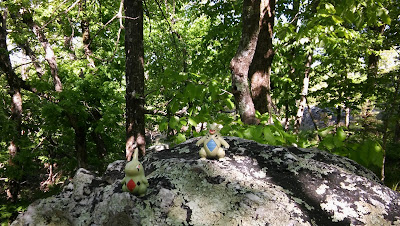 but like their South Carolinian co-orogenists, they were covered in ants, so I didn't stick around.

As I made my way back to my campsite, I discovered that the roads depicted on that map were only approximations of the actual, physical park roads. Curves were shown at the wrong angles, if at all; distances were horribly off-scale. The map was internally consistent, to be fair: if Feature A was shown to be at the midpoint between Features B and C, it was at least somewhere between them--or attached to one of them, as the restrooms turned out to be. Fortunately, I didn't intend to wander far that night; my exhaustion had convinced me that the bathhouses could wait until tomorrow.

I returned to my tent, fixed up a camp dinner, and spent the rest of the afternoon reading in "bed" to escape the heat and bugs. Good thing I'd stopped at that thrift store along the way. Though crowded at first, the campground cleared out as the hours passed until only myself and the group the next site over remained.


Around sundown, I stirred from my nest and wandered downhill to a west-facing overlook I'd passed earlier in the day. I'd missed the sunrise that morning, so I figured I might as well take in the sunset. So did the entire remaining population of the park, it seemed. Folks flocked out of the park's resort (because cabins just aren't enough for some) and clustered around the observation deck: 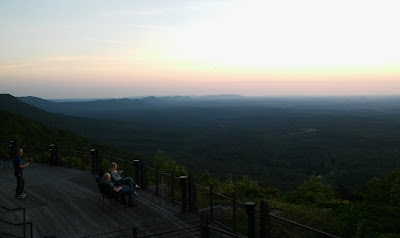 Honestly, though, that view deserved a crowd. Pictures don't quite do justice to the sensation of standing there and looking out at all that empty space. The west side of the mountain drops out, falling 1000 feet to the valley floor.

If I'd had wings I would have leapt the guardrail and flown out into that vast basin, over the darkening forest and the lakes flashing reflections of the purple sky--but I didn't. So I simply lingered as the crowd thinned out and the twilight closed in, watching the expanse until there was nothing more to watch.

Despite the day's 80-degree heat, I woke up shivering in the night and crawled inside my backup sleeping-bag. So goes the temperature in the mountains--even small ones like Cheaha.

I got a slow start the next morning. A single night's sleep wasn't quite enough to make up for my prior exertions, plus the plot of my book had picked up to the point where it was more attractive than the plot of my journey. I roused myself at last when the sun on my back began to burn (I'd left the rain-cover off the tent that night to catch the breeze), broke camp, and drove off in search of the bathhouses.

Ten miles later, I found myself at the shores of the lake I'd admired from the heights last evening, home to the only bathhouses marked on my map... which were closed. Lovely. By that time I was running low on time, patience, and phone-battery, so I cut my losses and left, hoping the rest of the Southern high points would have more accurate maps.

They all did, except for one...