I made it to Mt. Rogers without any further crises. As I drove up into the highlands, I noticed that though the leaves had been lush and green in the valley, they were barely budding here. That’s one thing I like about mountains: going a thousand feet up is like going several hundred miles north… or several weeks back in time.

I arrived at the gap between Mt. Rogers and its neighbor Whitetop Mountain by midafternoon. The missing-Lars debacle had set me back an hour, but I figured I still had time to hike 4.5 miles up the Appalachain Trail to the summit and back before dark. At worst, I’d get some practice hiking with a headlamp, which I’d need to do later in the trip to get up and down the Rocky (Rockiean? The ones in the west.) high points before their afternoon thunderstorms.

For the first time on this trip, I loaded up my day-hike pack (an Osprey with ~30L capacity, three major pockets, and more little strappy things than I’ll ever know what to do with). I didn’t know what the weather would be like up top, though it was pretty cold and windy in the gap, so I packed my Gore-Tex jacket from Mt. Washington along with a sweatshirt to wear while stopping for breaks (the most useful tip I learned from that mountaineering class. It’s amazing how fast you lose heat when you stop moving on a mountain). A liter of water, my notebook, my phone-camera, the aforementioned headlamp, and the Lars rounded out my gear. I zipped up my down jacket, shouldered the pack, and set off into the highlands.

The trail began on a grassy hill. Climbing it, I felt rather like the remnants of the Fellowship of the Ring as they crossed Rohan in pursuit of their kidnapped companions. But the trees closed in again just over the hill, all bare and spindly-branched as though it were still March, and I went back to plain old mountain-walking. At least the wind died down once I got away from the gap.

This southeastern approach to Mt. Rogers was rather less scenic than the one through Grayson Highlands State Park, which I’d hiked in the past. The trail meandered in brief rises around the forests of the mountain. The aloneness of it all unnerved me for a bit—there’d been a poster at the trailhead warning about black bears in the area—but that feeling passed after a while. As it turned out, I didn’t see anything larger than a deer the whole way there.

Along the trail, I passed a few AT thru-hikers. I was surprised to see them this far north so early in the season, but, as I later learned, Mt. Rogers is only around 250 miles from the trailhead in Georgia. The folks I saw had probably started in late March or early April. While resting, I chatted briefly with one of them, an older guy from Maine. I asked (rather foolishly) if he’d come from Maine, but he’d started in Georgia with the rest. The trails in Maine were still snowbound this time of year, he told me. I continued on, thinking that it must be quite convenient to do the AT northbound if one lives in Maine. The whole long walk must feel like coming home.

Not far from the spur trail to the summit, the trees opened up into a lovely panoramic view of the Highlands. 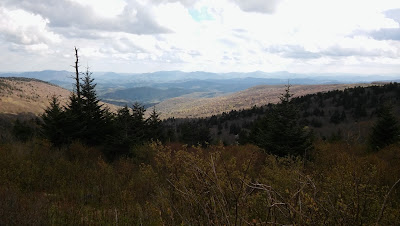 I hiked through thickets to the spur, serenaded by the evensongs of the local juncos and towhees. 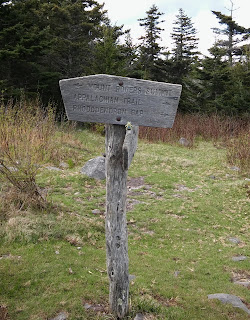 The spur trail dove back into the pine forest and took me straight up to the top.

Unlike most other Southern Appalachian high points, Mt. Rogers is remote enough to have avoided the summit-road/observation-tower cancer afflicting the rest. Not only was there no view from the heavily forested top, there were no monuments, plaques, or any of that other claptrap, just a plain old USGS survey disk.

I took a moment to rest and admire the scenery, 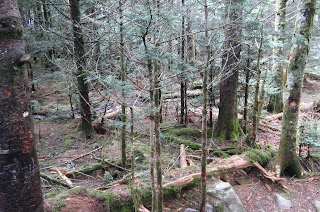 then began my descent.

A third of the way to the trailhead, I returned to some boulders I’d passed on the way up, just to the side of the trail...

By the time I had climbed each interesting face, the sun was setting. I hurried back along the trail, somewhat disappointed that I hadn’t seen any of Grayson Highlands’ famous wild ponies (though I’d stepped past plenty of their droppings on the trail)… and then, in the distance, I spotted three of them: two adults, a chestnut and a white, and their foal. The white and the foal backed away quickly, but the chestnut lingered... just long enough for me to fumble my phone out from my pack, and then he bolted. So no horsey pics for you.

As I tromped back through the seemingly endless trees, I wondered why in the world anyone would want to hike the whole AT at once. All you’d see for 99% of the way is endless acres of trees from Georgia to Maine. They'd vary by latitude and elevation, true, but they'd still just be trees, sticking up from the ground all motionless and apathetic. I appreciate that the trees are there, of course, and I’m grateful to breathe the oxygen they produce, but it’s not like they’ll work any harder if they’re being watched.

There are quite a few goofy high points out there that hardly seem worth the effort: Britton Hill, Mount Sunflower, Campbell Hill—but at least they’re all different.

I made it back to the trailhead just before dark and found a campsite in the woods behind the parking lot. I pitched my tent there, changed out of my hiking clothes, and, after a very light dinner (I just wasn’t all that hungry, you know?), settled in for the night.