You know how Mt. Mitchell and Clingman's Dome looked like this: 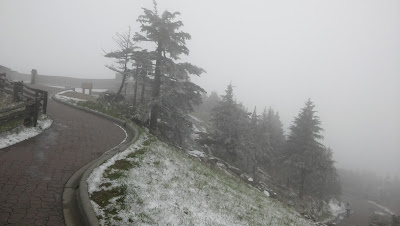 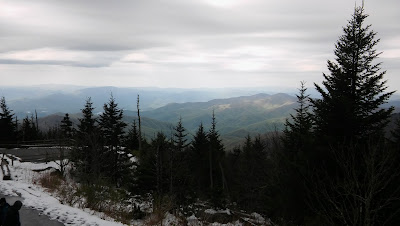 On that very same day, South Carolina's high point (only a few dozen miles south, but a good 3,000 feet lower) looked like this: 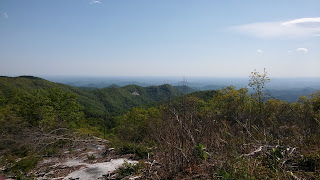 I'm telling you, mountaineering is like time travel. (And if you ask my friend Wil, it wouldn't be a bad idea to combine the two.)

After escaping the Smokies with minimal traffic-delays, I stopped for lunch in Cherokee, then continued south down twisty mountain roads through the western tip of North Carolina. My destination, Sassafras Mountain, was right across the border: not far as the crow flies, but if my car could soar over the hills like they do, I'd have engineers from here to Japan trying to hunt it down.

As it was, it took me half the afternoon to reach the rocky bottomlands of Rocky Bottom, SC. Along the way, I passed several exclusive-looking lake resorts... including one whose restaurant advertised a daily special of "Osterias del Monte." Did their patrons know they were about to pay big bucks to dine on fried bull nuts? Eh, not my problem. Fools and their money, you know.

Unlike the last three mountains I'd hiked, I had never been to Sassafras before. My directions had me driving up the mountain on State Route 199 (lame, I know, but I was hoping to push on to Georgia before dark), so up the road I turned. It was a little steeper than I'd expected--and by that I mean I drove up the first rise with a white-knuckled grip on my parking brake in case my car gave out and started sliding downhill--so I pulled over at the first chance I got:

The name meant nothing to me. Where to, now? I wondered. I hopped out of the car and looked up the road--more steepness--then down the way I'd come...

...and spotted a troop of youngsters (youth group, college club, take your pick) hiking along the shoulder. I asked if they were headed up Sassafras. They were on their way down, but they pointed me to the trail they'd taken, which began in the woods just up the road.

A trail? How convenient, I thought. It would take me longer than driving, but my feet can handle much steeper inclines than my car. Plus it's only South Carolina--just a smidgy little mountain. How hard could it be?

Now, if you're the sort of person who reads titles, you'll recall that this particular "smidgy little mountain" is over 3500'. That's small compared to Mitchell and Clingman's, but it's still a nontrivial hike, even from halfway up. So if it was pride that sent me straight up that mountain still in my sneakers and long pants from the morning, I was due for a 2.5-mile, ~1000-foot-vertical-gain fall. If it was haste, I deserved the slow agony of that hike. And if it was dehydration, well, that's what I get for violating the First Rule of Mountaineering: 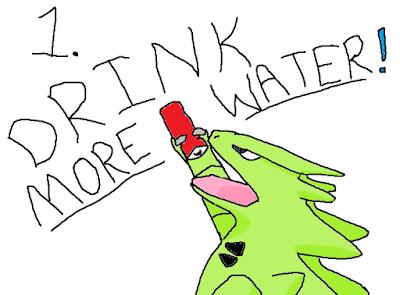 Yup, that's right. No matter how much water you've drunk so far, it's not enough. Drink some more. Right now. Chug.

It really was a shame I didn't properly prepare for that hike, because Sassafras Mountain was beautiful. The trail began in a lovely sun-dappled wood:

lovely, but also hot, buggy, and steep. It didn't take long for me to soak through my shirt. I flopped down to rest--not even a mile up--at a little campsite on a ridge: 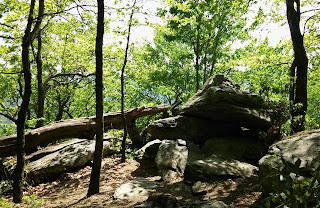 which, I realized shortly after sitting down, was covered in ants. Onward I went.

Halfway there, the Lars spotted some nice boulders just off the trail: 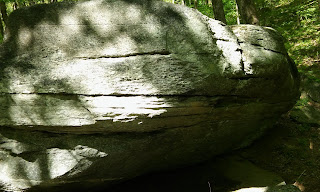 but I was too tired to give them a try.

A little further on, at a flat stretch atop a ridge, I heard a weird croaking sound coming from a pine beside the trail. It sounded like a raven, so I came over to the tree to get a glimpse of it. The pine was too thick for that, but while I was there the raven chirped out some imitations of car-unlocking noises. It had quite the repertoire of them... so I must be near a parking lot, I figured.

Sure enough, a few minutes later I reached the place where I'd intended to park: 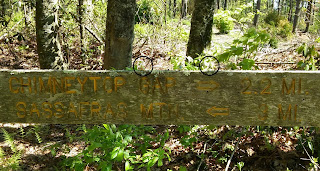 I followed the trail up that last, steep .3 miles, then climbed some wooden steps and emerged from the forest into the cleared summit area, which was pretty amazing. The 360-degree view stretched from the 6000-footers of North Carolina:

to the lowlands of its sister state, vanishing into the haze: 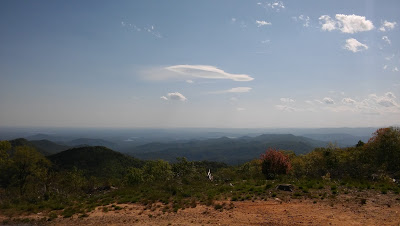 There was a summit marker, of course, 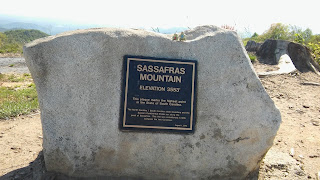 and a Highpointers Club bench, and, rather conveniently, a cell signal. I lingered for a while, resting and catching up on communications. When I felt a sunburn coming on, I drank the last of my water and headed down. This time I took the road, thinking it would be shorter than the trail. It wasn't, but at least the ground was smoother.

By the time I got back to the car, it was well after 6 pm. I sank down in the front seat to rest, rehydrate, and figure out where to stay for the evening. I could have hauled my gear up to that campsite in the woods, but ANTS!, so I decided to push on to Georgia instead. Either I'd pass a campsite along the way (I'd seen plenty of little blue tent-signs on my way to Sassafras) or I'd sleep somewhere below Brasstown Bald once I got there.

So I drove on as the sun sank over the Carolina hills...