I pulled into the gravel lot at the Jack's Gap trailhead around 10 pm that night. All the way there I'd looked for a campground--well, as long as the sunlight had lasted--but, it being a Saturday night, the only place I'd come across was full. So here I was. My itinerary had me camping a mile downhill from here along the AT, but it also had me arriving before dark, so...

After a brief look outside, 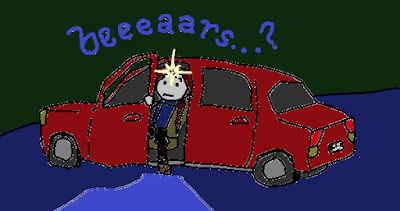 I decided the most prudent course of action was to stay in my car. I made some space in the backseat, then cuddled up beneath a blanket to wait out the night.

Hmm, I thought as I drifted off to sleep. This ain't so comfortable. How can I make the night shorter? Why, by waking up early and making a sunrise hike of the Bald! I set my phone's alarm for 6, figuring that would be more than enough time to hike the mile and a half to the summit before the sun came up, then conked out.

Now, if you've ever been to Brasstown Bald, particularly if you've hiked it, you might have noticed a mistake in that last sentence. You're absolutely right.

Those drowsy calculations of mine were the final link in a chain of exhaustion-induced mistakes that had followed me all the way from Tennessee. It's just my luck that I didn't end up lost or stranded somewhere, only mildly embarrassed. But keep quiet for now--let's not spoil the surprise for the rest of the readers.

RING-A-BING-BONG-BOOP! screamed my phone at precisely 6:00 AM on the morning of the 8th. FLEEDLE-DEEDLE-WAKE-UP-STUPID!

I slammed it into silence, then got up to look around. Though the sky was lightening, the forest was still dark and impenetrable. Perfect. I suited up, packed my bag, and headed up the trail by the light of my headlamp. I had to angle my head funny to keep the beam pointed at the ground, but at least the light warned me before I walked into the many webs Georgia's industrious spiders had spent all night spinning across the trail.

It wasn't long before I didn't need the lamp. Soon I could see the green of the new leaves with my naked eye, then the brown of the soil, then even the red of my backpack. And then, about halfway up, I looked behind me and saw the sun peeking over the foothills.

So much for the sunrise... but I was almost there, right?

Wrong. Had I actually checked my itinerary last night, I'd have seen that the Jack's Knob trail was three miles each way, not round-trip--plus an additional half-mile up and down Brasstown Bald itself. Knowing that, I'm sure I would have postponed this hike, seeing as I'd barely had the strength to get up and down Sassafras Mountain the day before. But I'd pushed on in ignorance, and I was about to pay for it.

Not long after sunrise, I reached a series of short, steep switchbacks. While I'm sure they looked something like this from above: 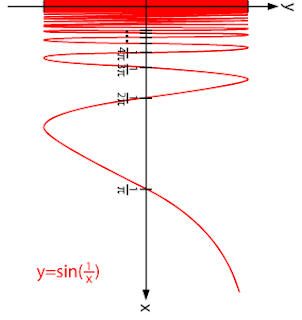 endless. I lost count around the dozenth turn.

By the time I reached flat ground again at Jack's Knob, a subsidiary peak a mile south and 500 feet below the Bald, the sun was already well-risen: 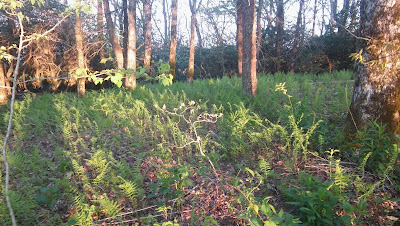 My legs felt like concrete, so I stopped for a rest beside some weird-looking wildflowers, 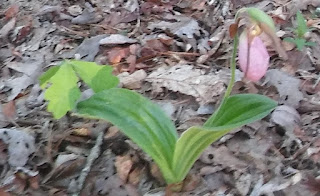 then pushed on down the trail.

Half a mile later, I emerged from the woods and found myself in a massive parking lot completely filling the col between the Knob and the Bald: 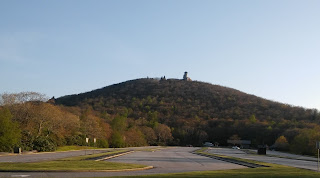 The only folks around so early were a friendly park ranger opening up the place and his even friendlier dog. The sunrises are great, he told me, but you have to get to the Bald by 6 in order to see them--being up so high, it sees the sun sooner. Of course. I checked out the visitor center—still closed for the night—then headed up the paved trail to the Bald proper.

Like Higgins Bald on the slopes of Mt. Mitchell, Brasstown wasn't quite as bald as I'd expected. Its slopes were covered in low but thick shrubbery: laurels, rhododendrons, and even a few firs (high places are cold, even in Georgia). It must be beautiful up there when the rhododendrons bloom, but they still had a few weeks to go. 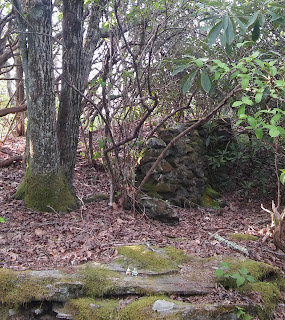 "Brasstown", you might be thinking, is a pretty odd name for a mountain in the middle of nowhere. It comes from a mistranslation of the Cherokee name for a nearby village: Itse’yi, meaning “new green place." White settlers confused it for another word, untsaiyi ("brass"), and dubbed the place "Brasstown" and the mountain "Brasstown Bald." The Cherokee had a strong presence here--prior to the Trail of Tears--as in much of the southern Appalachians. Their legends feature the Bald as a sort of Mt. Ararat, where the Great Spirit sheltered their people during a flood. Although they didn't worship the Bald as they did Blood Mountain to the south, they had several settlements nearby and used it as a meeting place.

By the time I made it to the summit, I was completely exhausted. It was my fourth high point within the last 48 hours; in that time I'd hiked 20.5 miles (with another 3.5 still to go on the descent) and driven hundreds more. I wanted nothing more than to keel over right there on the mountainside and sleep the soreness away... but first, I figured, I ought to see the place. So I climbed onto the observation deck and looked around:

After that, I backtracked to a grassy lawn below the building and flopped down on a bench. The winds were a little too cold to nap, so I just lay on my back, with my pack as a pillow, and looked up at the sky. It really was a beautiful day up here. 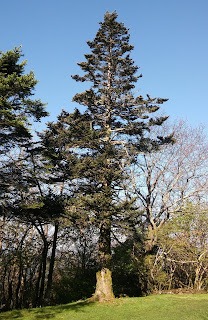 I eventually regained some energy and headed down. Walking downhill, as always, felt so much easier than going up had. I’m not sure why--if descending uses different muscles, or if it's a psychological thing, or what--but I’ll take it.

I made it back to Jack's Gap by midmorning, then, after a moment to reorient myself, drove off towards civilization in search of brunch.
<--prev | next-->
Posted by Stoat at 1:27 PM