Just like my drive up the length of Alabama the previous day, the drive down the length of Mississippi was long, hot, flat, and tedious. The few miles I spent on the Natchez Trace Parkway after leaving Tishomingo were nice enough--the road's meandering, recreational nature reminded me of the Blue Ridge Parkway back home, only without the mountains. But I swear that I-55 from Batesville to Jackson is so monotonous that they've built artificial hills into the median to force traffic to turn around them every once in a while--either that or I got stuck in a time loop while driving past the one real hill in central Mississippi.

I turned west at Jackson and crossed the state's eponymous river shortly thereafter at Vicksburg. The Mighty Mississippi, they call it, but I've gotta say it passed pretty quickly at 60 miles per hour. I would have stopped for a picture, but there weren't any pull-outs or exits. Don't worry, you'll get some later when I cross back over.

If Mississippi was flat, Louisiana was flatter. I-20 ran straight as an arrow through mile-wide fields, obstructed only by road work. The one thing that state had going for it was its gas prices. I refilled at some tiny town east of Monroe for $1.90/gallon, the cheapest fuel I saw all trip.

It was decidedly late in the afternoon by the time I finally arrived at Mt. Zion Presbyterian Church in Bienville, LA. No, I hadn't had a sudden crisis of conscience, nor had I given in to the local Biblemania (on a Friday evening?). Its parking lot serves as the trailhead for Driskill Mountain, the third-lowest state high point in the Union (topping only Delaware and Florida). 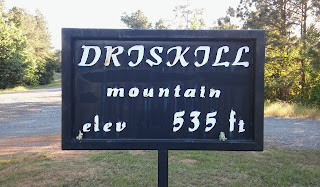 The trail runs through private land, some of which is still owned by descendants of James Driskill, the mountain's namesake and former owner in the mid-19th century (thanks to them for allowing public access!). It began, like Woodall's trail, as a gravel road through the forest: 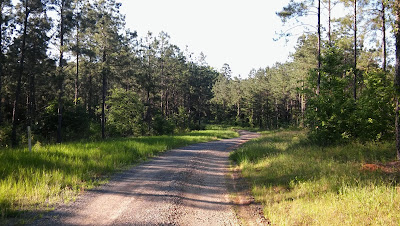 but soon narrowed into a rough wheel-rut. 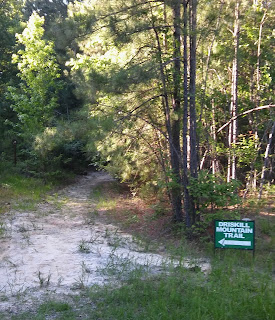 Shortly after that, the trail split. I took the branch that veered up and over a "false summit" (read: the next hill over) for variety's sake. It led me uphill through the forest to a grove of pines--and where there's pines, there's also...

...which LarLar quite enjoyed playing with. After that the trail dropped down into a shady little valley, then rose again to the high point. 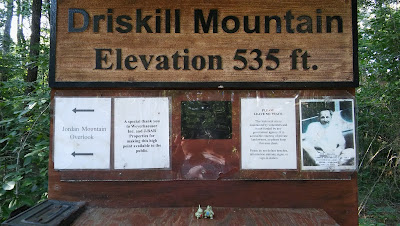 That's pretty much all it was: a clearing in the woods with a sign, a bench, and a small cairn of stones.


Though somewhat lacking in grandeur, it was a peaceful place, with a gentle wind rustling the treetops. It seems I wasn't the only one who thought so. As a sign informed me, this summit was the final resting place of Jack Longacre, founder of the Highpointers' Club and father of the pastime. His ashes, scattered there in 2003, had long since mixed into the soil, but after reading that I stepped a bit more reverently over the sandy ground.

I signed the summit register, then hiked back down the standard trail to my car. There wasn't anyone else at the church, so I figured no one would mind if I spent the night there in my car. I pulled to the side of the parking lot, fixed myself a leisurely camp supper, and read through the remaining hour of daylight. 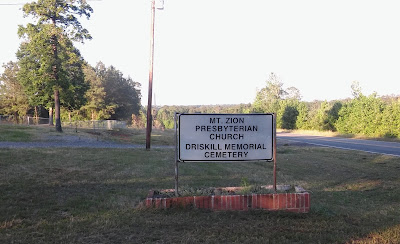