That's no placeholder--New Jersey's high point is known, in a burst of creativity well-suited to the Inter Garden State, as "High Point." But I'm not quite there yet; I'm still in that parking lot at the Water Gap, sleeping like a rock...

...on a scree slope filled with popular trails. A few moments’ oblivion, and then something or other would twinge or prickle or need to stretch farther than my car’s backseat allowed, so I’d be up again, staring into the woodsy darkness as my thoughts circled round in distorted patterns, repeating the songs I’d heard on the drive up in a slow decrescendo until they slithered off again into a shallow dream in which the lot was filled with cars and their inhabitants, all listlessly waiting, like myself, for a tardy dawn-

Outside my dreamscape, gravel crunched.

I shot up from my sleeping bag. What was that? Another bear? A lost traveler pulling over for directions? The police?

None of the above; it was a white van (sketchy) with a kayak strapped to its roof (which somewhat mitigated the sketch factor). It idled for a moment, then cut the engines and shut off its headlights.

Huh. So I was no longer alone in the woods.

I watched the car for a while, waiting to see if anyone would emerge, but whoever was inside that car didn't even crack a window. And yet I didn't feel quite right in returning to sleep so near an unknown quantity. The car-clock read just shy of five in the morning, but the sky was already blueing... what the hey, I figured, I might as well drive on.

So I set off down the river road, dodging potholes and crepuscular critters alike. Both were plentiful; riparian zones, while not providing the most stable surface for asphalt, make a great habitat for everything from robins to deer. Fortunately, they all had the sense to shoo before my tires. After an hour's drive and a few wrong turns (you wouldn't think I could get lost while following a river, but I narrowly avoided taking a toll bridge back into PA), I rejoined my planned route to the high point.

Now that the sun was up and places were actually open, I stopped for gas in Montague, NJ. To my surprise, an attendant came over, filled my tank, and cleaned my windshield. I felt like a princess, sitting back while the peasants did my chores... but then he asked for my debit card, and the illusion was shattered. Oh well. Best not to take that frilly-dress mentality up a mountain, I suppose.

After leaving town, it was a straight shot up NJ-23 to the high point. I arrived at the park gates at 6:40 AM only to discover that the park (and thus the permanent parking) didn't open until 8. Fun fun. I pulled into the temporary visitor lot, which was right beside a beautiful pond, and hopped out to eat breakfast. A family of geese was hanging out by the waterline; being the incredibly mature and wildlife-respecting person I am, I decided to go bother them. Bad idea--turns out it was Learn to Repel Stupid Humans Day in the kindergoose curriculum.

Needless to say, I finished my breakfast on the far side of the pond. 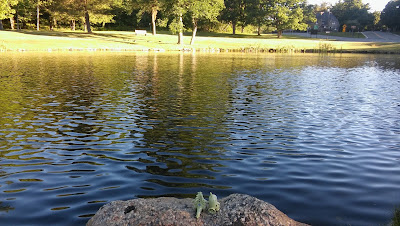 Rather than wait an hour for the park rangers to show up (and probably charge me money to enter the park), I backtracked down 23 to the nearest parking area, which happened to be the Steeny Kill Lake boat launch. Such mountaintop lakes, I later learned, are an exclusively Northern phenomenon; it and its neighbors were gouged out by glaciers during the last ice age. New Jersey was the southern limit of the ice sheets, so this place and all my subsequent destinations would all bear marks of glacial activity.

The lake itself was beautiful in the morning sun: 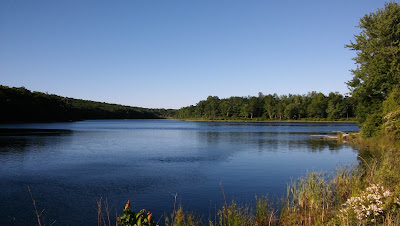 clear and blue, not like the artificial, algaed, muddy messes they pass off as "lakes" down south. A high ridge overshadowed the lake; atop it, in the distance, I could see the white marble obelisk marking the high point. A blue-blazed trail ran along the lakeshore in that general direction. I followed it to the lake's end, then into the trees. The trail slowly rose through a clearing carpeted with ferns: 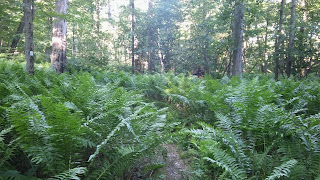 Halfway up a ridge, it joined in a T with another trail, this one blazed red and green. I took the right fork, then followed it to its conclusion at a road in the park's upper picnic area.

Ascending the gradient, I headed up the park road, then turned aside onto one last gravelly trail that took me to the high point.

A sharp gust blasted me as I emerged from under the trees. High Point, like Cheaha Mountain back in Alabama, is another short-but-prominent ridge-crest exposed to all sorts of unseasonal weather by virtue of its prominence. The monument itself was closed, but I braved the winds long enough to capture the 360-degree view from its deck: 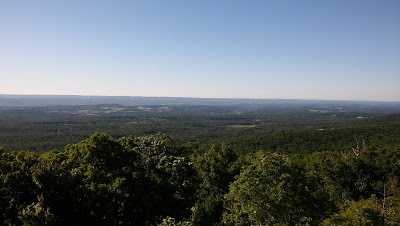 then retreated to the (relatively) sheltered rocks below. The Lars admired their glacier-scarred surface:

I turned north towards the distant Catskills. They looked so rugged against the horizon... and in just a few days I would drive even farther north to climb even higher peaks.

Well, I wouldn't summit Marcy, Washington, and Katahdin by standing around on this Jersey hill. I took one last look at the monument:
and backtracked to the trailhead.

While I was gone, the boat launch lot had filled with boat-trailered pickup trucks. I maneuvered out from between them, then drove on to the Taconic Highlands of New York, whose corner I would cut into Connecticut.