Side Trip: Mississippi and Ohio Rivers (280')

After Taum Sauk, I headed east to Cape Girardeau, MO to visit my cousin. Situated on the shores of the Mississippi, the Cape is the central metropolis of an area of very small towns—or, to stretch a metaphor, a medium-sized fish in a pond of minnows. On my way into town, in the early afternoon, I hit traffic for the first time in several days. The town was large enough to offer a full complement of civic conveniences, so I grabbed some lunch, then holed up in the (surprisingly nice) local library until my cousin got off work.

Just as the Deep South differed from the Appalachians, so too did Missouri from the both of them. The accents were gone, for one, and the place-names took a sharp swing towards the bland. I was still solidly in the Bible Belt, though, with all that implies: pro-life signs along the road, Christian pop playing overhead in stores, churches all over the place, and so on. This is the Midwest, I suppose.

My cousin showed up around dinnertime. While we dined (at an Italian place in the old town), we caught each other up on our lives. She lives in Cape Girardeau, but works 45 minutes away as an engineer at a plant in [Bloomfield?]. Hardly an ideal living situation, but it’s the norm for a spread-out place like southeastern Missouri. She took the job—her first out of college—hoping to be promoted and reassigned somewhere more urban, but after spending a year in town she’s come to like the place… even with all the flooding.

Floods, it seems, are a way of life along the Mississippi. Downtown Cape Girardeau is shielded by a concrete floodwall 15 feet high. We walked down to it after dinner and ducked through a gap to find the Mississippi River lapping at our feet.

The river was much higher than usual, said my cousin. There’s usually a whole flight of steps down to the water. I wasn’t surprised, given how much rain had fallen on me up at Taum Sauk. It still had several feet to rise before it reached the floodwalls, but last year there’d been a flood that nearly overran them.

I kept that in mind the next morning as I crossed the river and drove south towards Cairo, IL. As rain poured down outside my car and my tires plowed through puddles in the road, I wondered if this was really the right weather in which to visit the confluence of the Mississippi and Ohio Rivers. But, I figured, I’d never see it if I didn’t even try to visit.

For all its former prosperity as a rail and steamboat hub, Cairo, IL is a dying town. Half the buildings I passed as I drove down the main street were boarded up, victims of two rivers’ floods… although both the town’s liquor stores were open for business. I followed US-51 as far as I could, which turned out to be just far enough. The bridge from Illinois’ southernmost point back across the Mississippi was closed for repairs, but Fort Defiance State Park, my destination, was right before the roadblock. The parking lot was empty (on a beautiful day like today? I wondered as I dug my Gore-Tex out of the trunk to keep off the rain), so I had the place to myself.

Surrounding the lot were several signs and markers memorializing the park’s history. Lewis and Clark had spent six nights between these rivers while the former taught the latter how to use a sextant—a good thing for an explorer to know, that. The fort was a vital Union base in the western campaign of the Civil War (and I could tell I’d reached the North because the Yankees, not the Rebels, were the heroes of the poster). Even the bridge over the Ohio had its own plaque. I read them all, to be polite, then wandered down the path into the park.

After half a mile’s walk, I arrived at the confluence. To my left ran the noble Ohio River, to my right the mighty Mississippi, and before me the two titans crashed together in-

-okay, fine, it was nowhere near that grand. First of all, the banks were lined with litter (natural and otherwise) and speckled with that gross off-white foam that collects in stagnant pockets near swift-moving water. Second, the entire walk there was one huge puddle, so my shoes were soaked through. And third, the observation tower at the waters’ edge was covered in graffiti. “Moose Besos?” I don’t even want to know. But there was a pretty neat view from the tower:

and from the ground below: 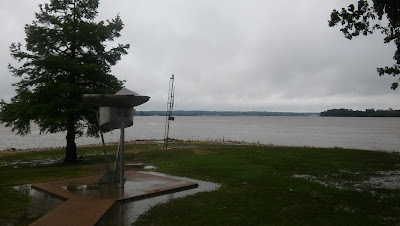 From there I could see three states: Illinois, where I stood, Missouri, where I’d been, and Kentucky. Hard to believe this place was in the same state as Black Mountain.

I could have stood there for a long time, watching the rivers mingle. There really was no violence to it at all, only a slow, insistent convergence. But I had hundreds of miles still to go that day, and despite my Gore-Tex I was getting wetter by the minute. So I splashed back up to my car and drove on.