I woke up at midnight in that church parking lot in Louisiana, unable to breathe. My car is airtight with the windows up, you see, and I always leave them up when I'm sleeping for safety and bug-proofing (I'm super-sensitive to mosquitoes, and nowhere in Louisiana is far from swampland). A carful of air usually lasts me through the night with minimal discomfort, but for some reason, that night it just wasn't enough.

I sat up in the backseat and pondered my options. I could crack a window and ventilate the place for an hour or so before going back to sleep, but who knew how many bugs would let themselves in, lured by the delicious scent of my skin? I could suck it up and go back to sleep, but I'd read too many horror stories of oxygen-deprived mountaineers to sleep at peace in palpably bad air. The only choice left was to drive on to Arkansas and catch up on sleep when I got there.

That whole drive through the middle of nowhere in the middle of the night felt surreal... almost transcendental. I was the only one on the road through most of it. Like in an antique video game, the world was pared down to its most essential elements: nothing there in the big dark but me, my car, and the tiny patch of ground before my headlights. Slowly I drove up the hills and corners--each one blind--hewing to the line of golden reflectors that marked the center of the road.

Routefinding, of course, was quite the trick in this darkness. I pulled over repeatedly to recheck my directions, confirm the next turn, and make sure I was, in fact, driving in the right direction. Once I turned the wrong way at the edge of a town, realized it a mile into the countryside, about-faced, drove back through the town, missed my second turn in that town, and backtracked halfway through town again before I finally found the turn (poorly-labeled, in my defense). It didn't help that the roads of northwest Louisiana and southwest Arkansas are inimical to north-south travel; no single route brought me more than fifty miles closer to my destination.

I made it a lot farther than I'd expected without getting drowsy, but eventually I did. A few miles from Delight, AR, I pulled off the road and napped until dawn. When sleeping in one's car, it's a good idea to leave your nap-spot before the sun rises and people start moving around; if there's a chance someone might object to your presence, best to move on before they even know you were there.

In the morning I drove--on, north, upwards, pick your preposition--into the foothills of the Ouachita Mountains. This range and its northern cousins, the Ozarks, are nearly unique among the major ranges of North America in that they run east-to-west rather than north-to-south. Then again, the Ouachitas and Ozarks can only be considered "major" in the absence of any other range between the Appalachians and the Rockies. The Ouachitas top out at 2753' and the Ozarks at 2561', which makes for cute foothills but lackluster summits.

The deeper I drove into Arkansas, the more it seemed like West-Virginia-lite. Similar features lined the roads: tiny towns, wilderness parks, tourist attractions (many involving crystals, the geologic crop of the Ouachitas), gun stores, silos, dead cars, Confederate flags, steep fields full of skinny black cows, off-brand convenience stores, and gravel roads to nowhere sealed off by rusty gates. Yet despite its smaller hills, this place felt even more remote, farther from this century's centers of action. After all, who'd ever go to Arkansas besides an Arkansan--or a highpointer?

The biggest difference I saw (besides how the mountains ran the wrong way) was in the linguistic flavor of the place. Upon crossing the Mississippi I'd passed into the former Louisiana territory, and it showed, from the Petit Jean Valley to the Fourche La Fave River to the Ouachitas themselves (helpfully Anglicized in a nearby town's name to "Washita," in case French orthography gives you the shivers). The town names, though, were your typical Middle American combination of the geographic (Pencil Bluff, Pine Ridge), the neoclassical (Arcadia, Corinth, Dardanelle), the religious (Hope, Mt. Tabor), the founder-honoring (Danville, Harvey, Waldron), and the wishing-we-were-somewhere-else (Little Texas, Nashville, Havana).

Around midmorning, I turned north from the last of those onto State Route 309, which took me up into the hills of Mt. Magazine State Park. The drive was quite scenic: I passed several overlooks into the Petit Jean valley (which I skipped, figuring correctly that the views would be even better up top) and a few waterfalls bouncing downhill:

There were a fair number of cars on the road by now (which made sense, this being a blue-skied Saturday) so I really shouldn't have been surprised to find the park's campground full. And yet I was--all night I'd been running on chocolate and stolen naps, banking on the fact that when I made it to the park I could grab a site and crash. No dice. So I picked up a map at the visitor center, then wandered over to the picnic area for a nice quiet lunch in the shade. On second thought, I grabbed my sleeping bag to serve as ground-cover and maybe to lie down on for a moment or two... 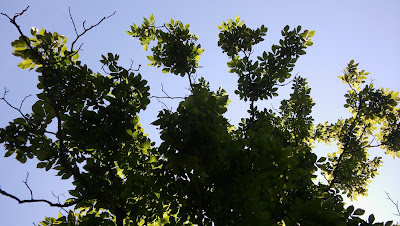 I woke an hour later feeling, though not entirely rested, at least conscious enough to enjoy the place. Consulting my map, I discovered a series of trails that led from the picnic area to the summit, a couple miles down the ridge. After swapping my sleeping bag for my day pack, I headed up.

The forest atop Mt. Magazine was open, green, and full of wildflowers: 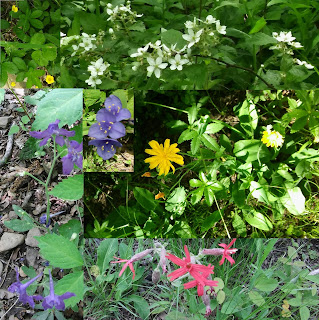 Birds sang from the branches; butterflies fluttered across the trail (and occasionally landed in it, only to jump back up as my heavy feet drew near): 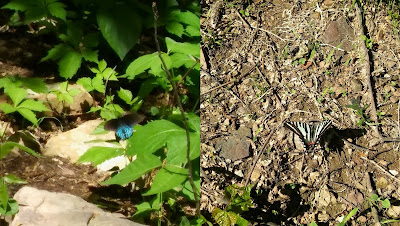 In fact, the only thing missing from this mountain was rocks of any appreciable size. I'd heard there was good climbing here, but perhaps the crags were isolated to a single area.

Near the top of Mossback Ridge, the slightly-shorter twin of the high point, Signal Hill, I arrived a a junction not marked on my map. Strange. I chose the direction with the most-likely sign and carried on.

A ways downhill from there, I crossed the road to the summit area: 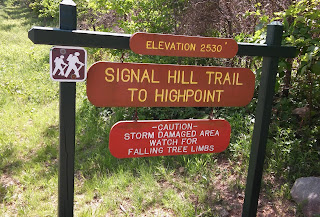 The trail circled round the mountain for a half-mile more, then ended in a clearing at the summit. I stepped inside and found myself atop Arkansas: 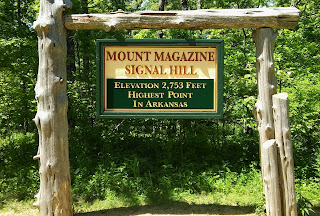 The ground was cobbled with a scale model of the state, in which each stone represented a county... though before you get too impressed, I should admit that most counties in Arkansas are pretty close to square. It was a nice touch nonetheless. I found the official high point 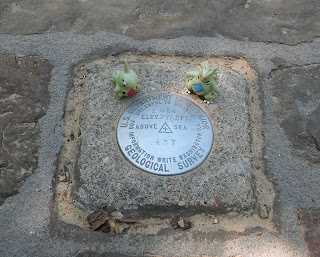 signed the summit register (the less impressive the summit, it seems, the more likely it is to have one of those), and made ready to descend...

...except the trail I'd planned to take down the far side of the mountain didn't exist. Weird. I backtracked to the junction with the road, then headed up towards the park's official Lodge in search of the climbing area. I knew I was in no state to climb today, but I wanted to at least see the cliffs.

After searching half the Lodge's backyard, I found a trail that led me over to the cliffs, but--here the map disappointed me again--only to their edge, leaving me with no way down but to rappel. Which, lacking rope, I couldn't do.

There was a nice view of the valley from there, though: 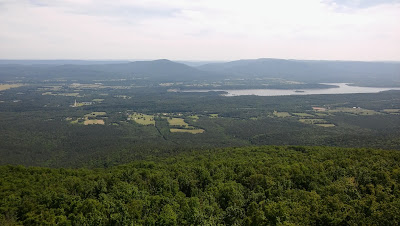 The Lars took a nibble of the rocks:

while I sat back and watched the cliff-swallows swirl over the forest.

I followed the trail further down the ridgeline: 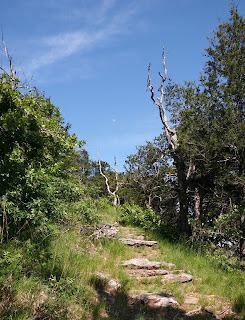 but it wasn't long before it routed me back into the neighborhood of cabins-for-rent. And thus I concluded that Mt. Magazine's map was even worse than Cheaha Mountain's; the latter was merely cartoonishly scaled, but the former actively peddled false promises.

Mildly miffed, I hiked back over Mossback Ridge to my car. Along the way I passed a family puzzling their way through the woods, just as confused by the map as I was. The picnic area was full when I got back; a reception, company picnic, or some such event occupied the formerly-empty pavilion. I ducked through the crowds, squeezed my car out, and shot away down the mountain. After spending most of the last 24 hours awake, I figured I could justify the expense of a motel room. And what do you know, they were pretty cheap in Russellville, AR.