I spent the whole next day driving through the flats of Arkansas:

in order to get to the hills of Missouri. I probably could have made better time, but like the previous leg from Driskill to Magazine, I was fighting the prevailing road-direction, so I burned at least an hour missing turns and getting lost.

I arrived at Taum Sauk Mountain State Park just in time for the setting sun to blind me all the way up the summit road. Not far from the top, I came to a fork in the road. All I could see was the roads themselves: one tine was paved, the other only gravel. I took the paved road, thinking it would lead me to the high point, and wound up in a wide grassy area on top of a gently-sloped dome. There were restrooms, a few locked sheds, and a metal observation tower, but nothing that advertised a high point.

Gamely, I climbed the tower for a look at the place. Those rickety old things always give me the chills. Up there in the air, with nothing but a few creaking slats of metal between me and oblivion... it makes me appreciate the solidity of a good ol' rock wall.

I made it up, keeping three points of contact on the steps and handrails, only to find the hatch to the observation deck was locked shut. Oh well. The top flight of stairs offered just as nice a view of the St. Francois Mountains: 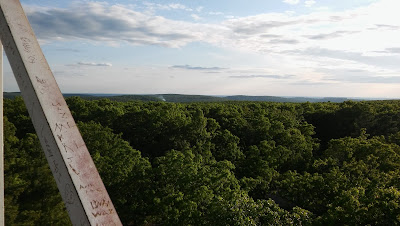 From my vantage point, I scanned the ground for signs of a trailhead, a monument, anything--but nothing checked out upon my return to the ground. Where was the top of Taum Sauk? In desperation I pulled up SummitPost on my phone (the page took a minute to load with my fading two-bar signal)... and it turned out the gravel fork was the one that led to the state park. This place was just the next hill over. I drove back down, and sure enough, right where those sunbursts had been was a sign for the park.

So I followed the gravel fork up to the campground and picked out a site. The place was nearly empty (it seems Sunday evenings aren't very popular for camping)--there wasn't even a ranger on hand to collect the site fees. Fortunately, I had exact change; it would have hurt my miserly heart to drop a $20 into the collecting-post for a $13/night campsite.

There was still a bit of daylight left after I settled in, so I wandered around the park to get the lay of the land: 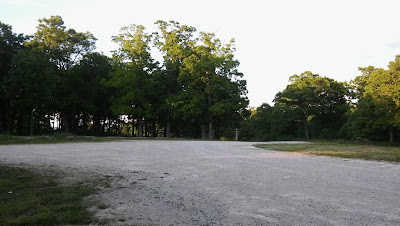 The road continued past the campground to the high point. I followed it a little ways to an overlook 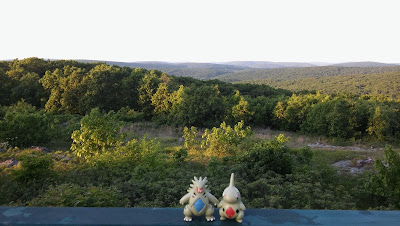 The clearing you see in the background is a glade (the local term for a bald), one of many that dot the slopes of the St. Francois Mountains. Like their Appalachian counterparts, the glades were naturally formed (in their case, by thin soils and periodic fires), but are now maintained by park staff. According to a sign at the overlook, the glades are home to several grassland species that spread to the Ozarks from the tallgrass prairie that once bordered them, including wildflowers, collared lizards, and... scorpions.

Having read that, I made sure to keep my boots inside my tent overnight.

I woke up the next morning to a chilly, gray (but thankfully scorpion-free) day. The forest around my campsite was full of bird calls; in addition to the omnipresent robins- 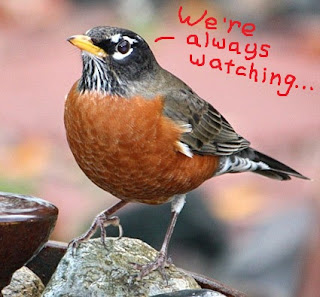 -I heard woodpeckers, cardinals, finches, and several songs I couldn't recognize. I lay in bed for a while, listening to their chatter... then finally forced myself out of my sleeping bag into the cold. My morning routine was automatic from there: take down tent, stow it away, choke down an energy bar, load up pack, and hit the trail. Or, in this case, the road. I left my car at the campsite, figuring it would be silly to drive to a trailhead just a few minutes' walk away--but not only did the trailhead turn out to be half a mile past that overlook, it also had its own parking lot. As I walked, it started drizzling.

The trail to the highpoint was ADA accessible: short, flat, and paved. As for the high point itself, the park's own map describes it thus: "Since it's atop a flat dome it's not very scenic, but they have a nice plaque."


The real attraction of that mountain was Mina Sauk Falls, Missouri's longest wet-weather waterfall. It drops (consulting the park's map again) 132 feet, which sounds about right, although it was so elongated and segmented that I'm not sure where it officially began or ended. The trail to the falls, which branched off from the highpoint trail, was announced by an oddly panicky sign:

Despite the thickening rain, I decided to give it a go.

At first that sign seemed like a joke; the trail began as flat as the highpoint sidewalk. But gradually the gravel underfoot got larger and looser and more thinly spread until it blended with the native rocks into a distinctly rough surface. I followed it downhill through woods and glades: 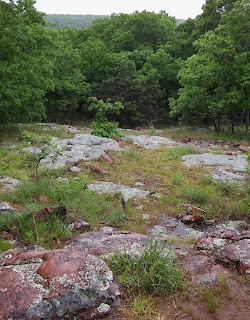 Fortunately, scorpions don't seem to like rain, so I passed through the glades unmolested. No, my biggest hazard that day was the slippery-wet rocks themselves.

That's what I get for doubting the sign: a difficulty boost. Coming down those rocks, and the ones that came after, I almost wished I had my ice axe for a third point of balance. On a clear day I would have hopped all over them with no problem, but today, in my near-tractionless running shoes, they weren't fun.

After several glades' worth of this, I arrived at the falls: 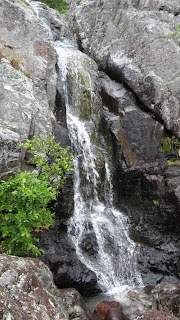 With a torrent like that, it's hard to believe it dries up in clear weather. At the Lars' insistence, I climbed down for a closer look:

then carefully inched my way back up to the trail.

On the uphill I passed a bunch more mini-waterfalls: 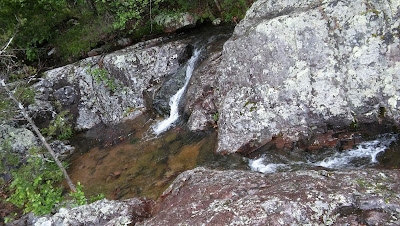 not counting the trail itself, which was by this time thoroughly soaked. I hopped from rock to rock in the thickening rain. Thankfully I didn't slip and fall, but I did wind up landing in a few puddles. Of all the days to forget my ostensibly-waterproof hiking boots... though even those might not have made a difference.

By the time I got back to my car, I was soaked through and shivering. I kicked on the heater, swapped out as much of my wet clothes as decency would allow, and drove off.