The traffic, as though to wish me a special welcome to the Northeast, was bumper-to-bumper in the Philadelphia suburbs that afternoon. It took me so long to inch my way up I-476 that I almost skipped the Delaware Water Gap (I'd meant it as a midpoint stop between Ebright and New Jersey's high point), but I'm glad I didn't, since it turned out to be the most visually impressive place I saw on this trip until the White Mountains. Blame that on bad weather in the Adirondacks if you like, but you must admit that this: 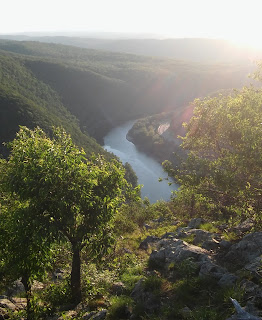 is really something. Enough, I'd say, to make up for both that morning's disappointing Azimuth and the tepid flatness of Pennsylvania's own high point (remember Mt. Davis? I barely do).

You wouldn't think I'd have struggled to find a massive gaping hole in the mountains... but then again, you probably haven't seen the traffic patterns there. Over time, engineers have squeezed a railroad, an interstate highway, a state route, and a few local roads into that quarter-mile gap in the Kittatinny Ridge, most of which is occupied by the Delaware River itself. "A tight fit" is an understatement; the parking lot of the trailhead I eventually found emptied straight into the 60-mph traffic of I-80. But I suppose it's better for them to overstuff the natural gap than to blast an artificial one (like Sideling Hill) through the ridge to relieve congestion.

After a few premature exits and roundabout returns, I pulled into Dunnfield Creek Natural Area, a small parking lot providing access to the AT, some local side trails, and the eponymous creek.

I hadn't planned to hike at the Gap, but there wasn't much to see from the water level, so I headed up the red-blazed Tammany Trail for a better view. 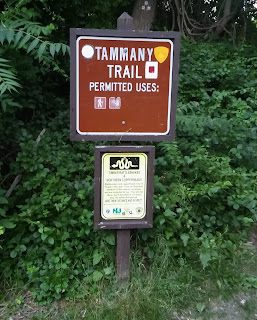 The trail took me through the woods for a while, then I ditched it for a side trail that looked more interesting. That one ran up a steep dirt slope (these do exist, Tom, but only in heavily vegetated areas) and over some rocks, then turned to follow the edge of a cliff that ran diagonally down the mountain. I got my first glimpse of the river here, at one of many overlooks: 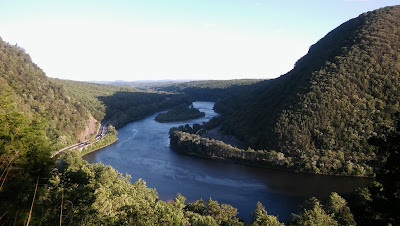 Before long, my little desire-path merged with the main trail (after all, it'd be cruel to deny those views to the obedient hikers). I continued up, passing several other groups along the way. Weirdly enough, all but one of them were young couples. I guess the Water Gap is a popular place to take your sweetheart? With the mountain laurels blooming, 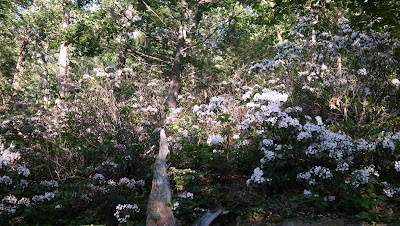 and the sun dappling the forest, 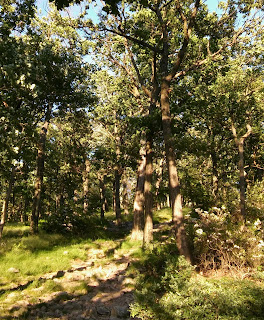 I could see why. There's even a boulder field where you can offer him or her a hand up:

With that in mind, I scrambled up the rocks alone (save for my little green buddies), then walked on to the trail's conclusion: a grassy, rock-studded slope. Across the Gap was Pennsylvania's Mt. Minsi: 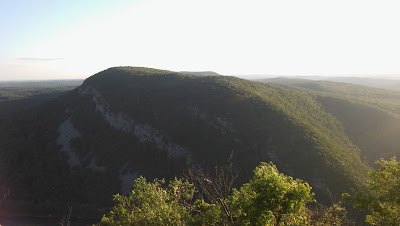 below lay the river: 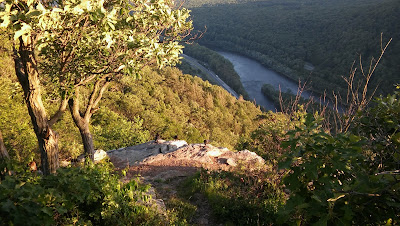 and behind me were the wind-blown trees of the summit.

Not bad, New Jersey, not bad.

I wandered around for a bit, trying to find the official summit of Mt. Tammany, but the trail faded out after that overlook, so I only wound up lost in the tall grass. After extricating myself, I returned to the trail and headed down. The sun joined me in my descent. Most folks had already headed home, but I passed one last couple on my way down the rock scramble. At the fork I took the official trail--with dusk coming on, it's best to play by the rules--and was making good time down the gently-sloped path when I spotted a large, dark shape in the forest.

A bear. A real, live bear. My first bear. In New Jersey, of all places. Who'd believe that?

It (he? she?) was maybe fifty feet ahead, ambling through the vegetation just off the trail (I wish I'd gotten a picture for you, but I was a little too busy freaking out to memorialize the moment). Remembering my pre-trip research, I shouted at it, hoping to scare it off, but it just glanced up at me, calm as can be, and held its ground. Either I'm just not ferocious, or Joisey bears are used to humans running around their woods and messing things up. I shouted a little more, disappointed by its apathy, then meekly snuck around it; once past, I dashed the remaining quarter-mile to the trailhead on shaking legs.

Looking back, the bear wasn't all that bad. It was pretty small, for one--I've seen larger dogs, and certainly more ferocious ones (as a bite-mark on my thigh can attest--but that's another story). It didn't charge me, or crash into my tent, or steal my food, or even get any closer than the average woodland critter. But still, it didn’t run at the sight of me. It was not afraid. The books I'd read all said it would be, but it wasn’t. As a suburban human who’s used to transcending the food chain, that’s a disconcerting thought.

I waited at the trailhead for that couple behind me, listening for any commotion uphill and ready to run to their aid. No idea what I'd have done if the bear had attacked them, but fortunately that was a moot point; they showed up a few minutes later, unharmed and unruffled, having not seen the bear. All the best, I suppose, since that boulder field seemed to be more than enough wildness for them.

After seeing them off, I returned to my car to mentally regroup and figure out where to spend the night. Camping was out, what with that bear roaming around, but this parking lot was both too noisy (with the interstate 100 feet away) and too easily accessible to sleep securely. After some thought (and some supper), I wound up driving north along the river into Worthington State Forest. The raccoons and rabbits and opossums were out in force that night; several passed through the beam of my headlights. A few miles up the road, I turned off at an empty gravel parking lot and squirreled myself away to wait out the night.