From L'Anse I headed south to the MI/WI border, then on down US-45 towards the Wisconsin high point. Along the way, I realized that the Great North Woods are basically Finland. They've got the same climate, same low hills, same boreal wildlife, and the same endless forest. The immigrants who settled here must have thought the same: I passed a Korpi Rd. (Finnish for "forest") and a handful of Finnish flags hanging from houses and mailboxes. A broader Scandinavian influence was visible all the way down in the names on billboards and businesses and the old Lutheran churches in every town.

The roads to Wisconsin’s high point, like the ones I’d driven the previous day, passed straight through essentially nothing, just acres and acres of forest broken by the occasional farmhouse or tiny junction-town. I can see why the Packers wear green and gold: all they've got up here is trees and cheese. Further north those trees grew wild, but as I neared the high point park they separated into rectangular patches in various stages of growth--timberlands, I assume.

Around mid-afternoon, I pulled off WI-86 onto [RR], or “Rustic Road,” a twisty parkway that surrounded Timms Hill County Park. From that road I turned onto a narrow, one-way asphalt track that led me up through a grim gauntlet of trees. The thick forest closed around the road like Mirkwood come to life--passing through them, I understood how the ancients came to fear certain forests as evil, haunted places. But soon enough I pulled out of that gloomy patch of pines and into the parking lot. Just behind it, a cross-country ski trail crossed the road--maintained, a sign informed me, by the local high school's cross-country (running) team. It seems they practice here, no doubt so they can run hill repeats up their state's high point(!!!).

The hill in question, Timms, is named after a fellow who owned a logging camp along an adjacent lake (which also bears his name). The land was purchased by Price County in 1983 and converted into a park, making the Hill one of only two state high points in the nation (along with Florida's) to be located inside a county park. The park features all the standard amenities: a playground, a pavilion, and (right beside the Hill's trailhead) a monument to the pioneers of Wisconsin: 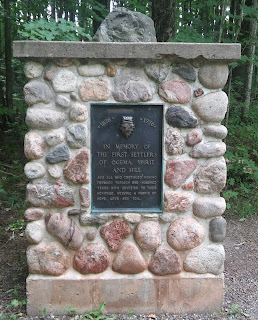 Posted on the back was a tribute to their accomplishments despite the hardships they faced: cold, snows, famine, isolation. One wonders, perhaps callously, why they didn’t simply settle farther south... but they must have had their reasons. I read the sign, then headed up the hill towards the high point.

A quarter-mile dirt trail took me through the thick forest: 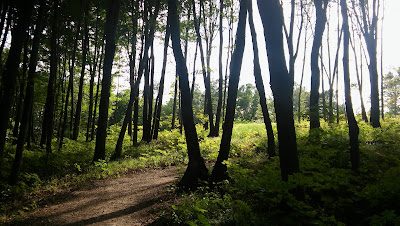 to the crest of the hill, which was (somewhat messily) cleared. At the apex stood both a metal radio tower, the typical Highpointers Club bench-and-summit-log setup, and a nice, solid wooden observation tower (which felt much more secure than all those rickety metal ones I've climbed). 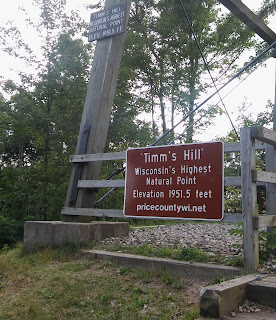 I climbed up to see the view: 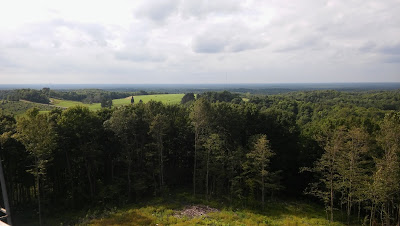 and it was quite lovely: green checks of forests and fields stretched over gently rolling terrain. I lingered for a while, taking notes, then descended. 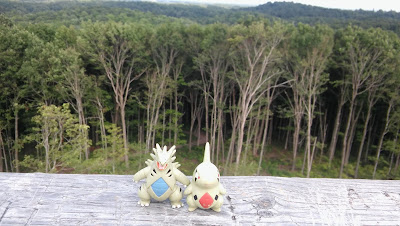 From the parking lot I wandered a ways down the cross-country trail to get a better view of Bass Lake (on the other side of the Hill from the one named after Timm):

The pines, as you can see, grew thick and tall, home to all sorts of reclusive wildlife--and a very stern squirrel who scolded me for trespassing on its turf. The ground was strewn with their needles and marbled with their roots: tough soil to convert to farmland. But those pioneers did, just as they busted the sod of the Great Plains and irrigated the arid basins of the West. How hungry had they been?

I drove on to Ogema, a small town just west of the high point. The entire town couldn't have been more than four or five blocks, but it was quite the lively place on this August afternoon, with folks strolling through the downtown and children playing in the elementary school's playground. Atop the hill stood an old steep-roofed church (Lutheran, of course), whose carillon was audible all through the town. But the main attraction, for me, at least, was that their municipal park offered free camping. I took them up on their offer and slept peacefully through the night, undisturbed by the local gang of geese and the mosquito swarm that rose up in the black night to feast upon the blood of the unshielded. Thank God for mesh netting.

I'll end this post with a direct quote from my notes that evening:

"I don’t know what I’m waiting for, but I keep expecting these places to be different from home somehow. And they all are, in little ways, but nothing major, nothing so different that even the grass below my feet feels unfamiliar."

On one hand, I was still east of the Plains when I wrote this--though hundreds of miles from home, I still hadn't seen nothing yet. The stark aridity of the mountain West would prove quite the shock to my system. But on the other hand, the one gesturing away from the hills to the valley-towns below, this pattern would continue. Difference-from-home turned out to be more a function of remoteness than pure distance; cities are all alike, but each small town was isolated in its own way.
<--prev | next-->
Posted by Stoat at 6:55 PM