I got a late start out from Duluth that morning and spent most of the day cutting a diagonal across Minnesota. Along the way I witnessed landscape change in action: from the rolling hills of the North Woods along the northern half of I-53 to a transition zone of agriculture and scattered groves and then at last to the Great Plains. The land had flattened out by the time I hit Minneapolis (where I crossed the Mississippi one final time, though it was so narrow that I mistook it for just another highway overpass). By Mankato the forests were done, and beyond that was pure prairie. The only trees were windbreaks around houses; the tallest shapes on the horizon were silver grain elevators.

Shortly afterwards, I spotted another storm sweeping east to meet me: huge and dark, just like yesterday's. The other cars seemed unconcerned, so I drove on, but every few seconds I found myself glancing up to the deep-gray clouds, tracking their progress. Weather is so much more intense out on the plains than any forest- or city-dweller can imagine. You see it coming for minutes, even hours, before it hits. Slowly but unstoppably, it bears down on you until it fills half your field of vision. All you can think about is how tiny you are in your little car, how helpless without any trees or hills or buildings to protect you from the sky's wrath. No wonder ancient peoples of the plains worshiped it; no wonder today's plain-dwellers block it out with windbreaks and clustered buildings. It demands respect.

Fortunately for me, the worst of that particular storm passed to the southeast--it only sprinkled on me--but more clouds waited beyond it. I spent the whole afternoon with my lights on, dodging in and out of showers. At least it was only rain this time. 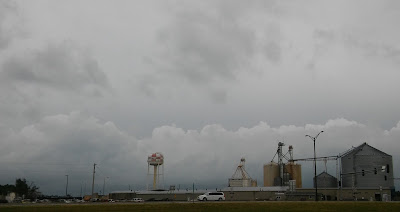 I finally crossed the Minnesota border around 5:30 pm. Hawkeye Point was just a few minutes past it, down a well-labeled turn off IA-60. The Point was larger than I'd expected, though still just a clearing in a cornfield, its rise barely perceptible beneath my feet: 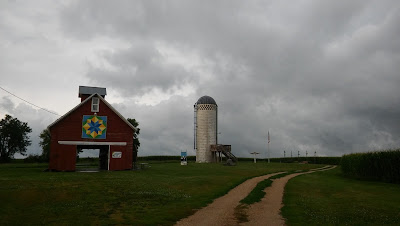 But Iowa was clearly proud of this place. The Sterler family (owners of the surrounding farm) had donated the land to the state, and several local groups had spruced it up with a variety of exhibits: a display old farm implements, 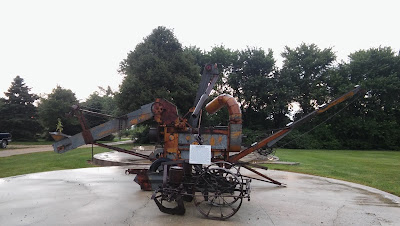 a museum-barn of local history, a replica of American Gothic for tourists to pose themselves in, 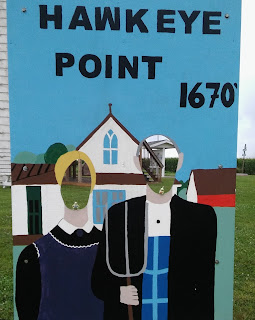 and, of course, the usual Highpointers Club setup. I stopped for a look, then continued on to the high point itself: 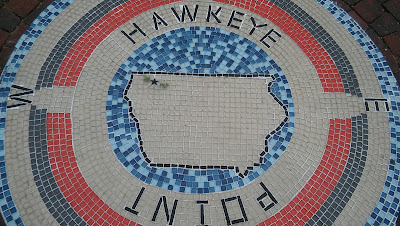 which was surrounded by a series of signposts that displayed the direction and distance of each other state high point: 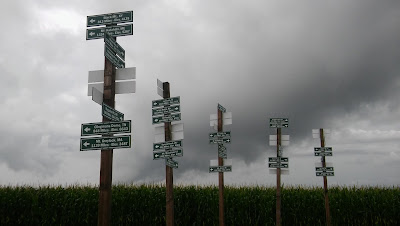 I circled the signs, taking in the information. Mt. Rogers was 845 miles from Hawkeye Point, and some of the Western summits were over 1000 miles away. I winced at this information. Even though I'd come so far from home, further than I’d ever traveled alone, even after all the summits and storms and other scares I'd been through, I still wasn't even halfway to the West Coast. The scale of this country, like any large quantity, is only an abstraction until one tries to cross it on land... and then it becomes a mind-boggling reality. And all those friends of mine who’ve flown across the country from one coast to the other don’t know the half of it. 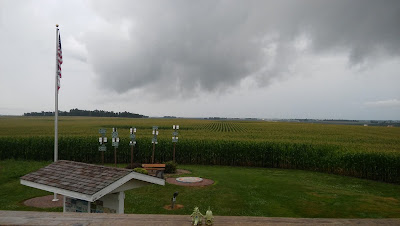 After I'd had my fill of Iowa, I backtracked to Worthington, MN and got a room at the local Super-8.

For some reason there were a lot of bikers at the hotel, most of whom were old enough to be my dad. My generation just isn't into motorcycles as much as theirs, it seems. Is the gleam of a digital screen that much brighter?... or were our mothers just too good at scaring us away from them? At any rate, I slept soundly, undisturbed by the pistons pounding outside my first-floor window, and set off the next morning down I-90 West.