Leaving behind the Land of Lincoln, I drove out from the canyon and over the border into the legendary dairy-land of Wisconsin. Seriously, the first town I hit after crossing the border had a monument to the Swiss settler who first made cheese there:

Other than that, the roadside terrain was much the same farms-and-fields deal as yesterday. I sped over the Sugar River (are all the local rivers named after pie ingredients? If so, I totally approve) and through Madison, then stopped for lunch in Fond du Lac at the foot of Lake Winnebago (another large Midwestern lake just short of greatness). Seagulls circled above the parking lot, hinting at waters beyond the horizon.

From there it was a relatively (and, at times, absolutely) straight shot up I-41 to the Upper Peninsula. Never had I seen an interstate highway so hypnotically flat and level--certainly none with four lanes of traffic on each side. Without curves or hills or any meaningful change in scenery, there was nothing to hold my attention to the road--even at 80 mph it felt like I was barely moving. I had to sing to keep my mind from straying. Up I shot through Oshkosh, Appleton, Green Bay...

...and then, more or less at once, the Midwestern cornfields turned to forests and the interstate to rural, two-lane US-41. The traffic disappeared, leaving me alone on the road. This region, the Great North Woods of the Upper Midwest, was without a doubt the remotest, sparsest places I’d yet driven through. There was nothing but trees, trees, and more trees for miles--pine, spruce, and birch, like in Maine--broken only by the occasional glacial pond.

A couple of hours later, I crossed the Menominee River into Michigan's Upper Peninsula (and back, temporarily, into Eastern time). Waiting for me was Iron Mountain, MI, a tourist town much like North Conway, NH, only without the obvious attraction of the White Mountains. The red-soiled hills around the town are as mountainous as the Midwest gets, I suppose. And even the flatlands have a certain quiet, wild appeal to them--plus it’s cold enough here that it’s actually nice to be outside in August.

The one problem with these two-lane roads is that roughly half the traffic on them either can't or won't drive the speed limit--and with only one lane in each direction, we're all stuck dealing with the consequences. The reckless speedsters are a temporary annoyance: they'll occasionally tailgate you for several miles, but more often they'll pass at the first chance and be gone. But if you get stuck behind a slow-moving boat trailer, an RV, or, god forbid, an eighteen-wheeler pulling an oversize load, it's on you to pass. This act--literally driving straight into oncoming traffic--never fails to give me the shivers. Dashed yellow lines aren't a thing where I'm from, you see, and it wasn't until late in this trip that I finally got the hang of it. Even if the road is straight, flat, and clear for a mile ahead, it feels like I'm taking my life into my hands by crossing over--as I had to do a handful of times that day.

Despite these incidents, I arrived around 6 pm in L'Anse, MI, a small town along the Keweenaw Bay of Lake Superior with a legacy of fur trading and supplying wooden side-panels to Ford. The sun was still high in the sky, reflecting off the uncharacteristically calm waters of the bay.

I pulled into a bayside park and hopped out to get my bearings. My phone had next to no signal, but via the town's (free, but spotty) wifi I learned that there was a campground in town with showers, nice lake views, and tent sites for $15 (another good thing about the heartland: folks are surprisingly willing to let strangers camp in their town). On the other hand,  Mt. Arvon was only 50 minutes away, and I could probably backcountry-camp there for free.

So, despite the lateness of the hour, I drove on down the northeast road towards Mt. Arvon. Along this road were scattered houses, gravel side roads, and unironically-named (I can only assume after seeing them all over the West) trading posts,  but no sign of road I sought. I turned back after half an hour, thinking I must have missed the turn, but another half-hour's drive found me back in L'Anse none the wiser. Where was this place? I pulled into the campground and hopped back on their wifi... and it was a few miles past where I'd turned back.

The dilemma recurred: push on or stay here? I looked from my wallet to the bathhouse, from the tent sites to the setting sun:

Back in May I'd have rushed to the summit at full speed, damn the torpedoes; the itinerary said to hit Arvon today, so I'd make it or die trying. But now I considered the consequences of pushing on: uncertain lodging, delayed dinner (you laugh, but an honest evaluation would ascribe most of my previous mistakes to hanger), and the risk of getting stranded on the mountain after dark... and decided not to. For the first time on my travels, caution had won the day.

And so I bought a site, whipped up some supper, and settled in for the night: 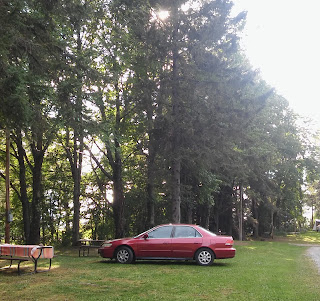 I woke the next morning on Central-sunlight time (take that, Michigan state officials), availed myself of the plumbing, and three-traced that old road to Arvon.

The mountain went similarly to several high points I'd done before. Like Mt. Mitchell, I'd driven out, turned back prematurely, and had to turn around again to find the place (down a wide, well-graded gravel road named for the nearby Roland Lake). Like Mt. Sassafras, I drove partway up (on another, much rougher gravel road, past a lake and a naturally-occurring gravel pit which drew the Lars like a kid to an ice-cream truck--not before we exercise, I told them), then bailed when it grew steeper than my little Honda could handle. And like Mt. Marcy, the (remaining) approach was a long slog through the middle of nowhere.

I'd read that Mt. Arvon was once one of the hardest state highpoints to find: it lay at the heart of a labyrinth of unlabeled logging roads navigable only with a compass, odometer, and detailed instructions. The route's been improved since those days; it's now labeled well enough for necessity--if not for comfort--with little blue signs depicting a comically rugged caricature of the peak:

Even so, there were still enough twists and turns and false summits to make me nervous. If I missed a sign, what would stop me from continuing on miles past my destination, following a gravel road to nowhere through this featureless forest? Sure, it looked all tranquil and sunlit by day: 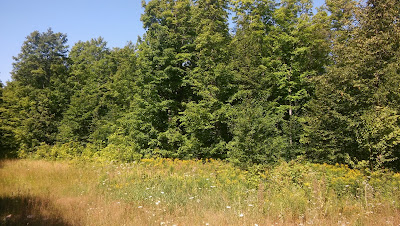 but some large, clawed footprints I spotted in the dirt suggested I wouldn't like this place quite as much come nightfall.

But it turned out that I had nothing to fear save my own stupidity: I'd left my water bottle back in my car, thinking it was only a mile or so to the summit. Why would I need that big heavy thing on a long walk up a dusty road at midmorning?

Two miles in, with no sign of the summit, I realized my mistake. All those hidden ponds glimpsed through the trees, those shadowed stands of pines, those wildflower-filled clearings: 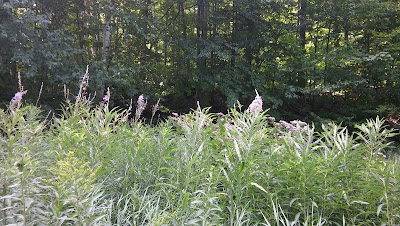 would have been so much prettier if only I'd been properly hydrated. But hey, that's life.

A half-mile later, the road wound up a false summit, then ducked away and continued on below the ridge; another half-mile, and I was there: 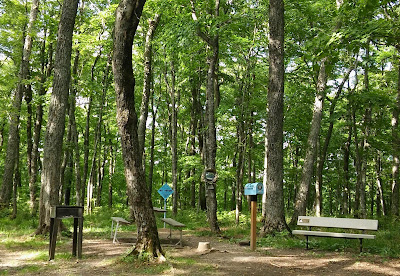 The only one there, it appeared, and the first to sign the summit log that day. I flipped through the other entries--some terse and factual, some reflective, and some marveling that their two-wheel-drive had made it up--then rested for a while in the grove, watching the breeze stir the treetops:

Then, as always, I headed down. A handful of work-trucks passed me on my way, stirring up clouds of dust so thick I had to shield my eyes for several seconds after they'd gone by. The car, of course, was covered in their dust by the time I reached it. I leapt in, chugged half of the liter of water I'd stashed in the footwell of the passenger seat (keeps it cold, y'know), dumped the rest over my windshield to clean it off, and drove back to L'Anse, stopping along the way to give the Lars their promised gravel snack.