I pulled to a stop atop Lookout Mountain (7377'), a foothill just west of Golden, CO. An aptly-named town, I thought as I emerged from my car, because that's just what those hills were, golden with the grass of the plains:

I wandered around for a bit: 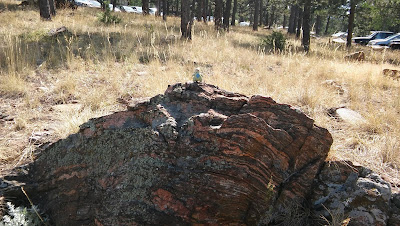 then sat down on the rocks to decide what to do next, if not climb the high high points. You know, the ones that were kind of the entire purpose of this trip.

I still had three Plains high points left to go: Kansas, Oklahoma, and Texas. The latter, at 8751', might even be too high for me, but I figured I might as well try--at the very least, I should be able to drive to its stupid trailhead. So I decided to swing back east and grab those three, then work my way north to Seattle by way of whatever interesting landmarks I could find... provided they were below 8000'. That would leave me with 37 high points for the summer. Not bad, I guess, but...

I could always come back another year. With a partner, maybe. And with a better understanding of my body's reaction to altitude. There were lower mountains I could practice on, in places that were less uniformly lethal than the Colorado Rockies.

I drove down the mountain late that afternoon on Lariat Loop Rd., a twisty two-laner that reminded me of the Appalachian country highways back home. Few fellow cars shared the road, but I passed plenty of cyclists and even a pedestrian. I stopped briefly at an overlook in the middle of a hairpin turn: 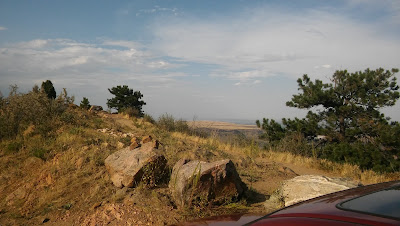 from which I could see up into the mountains, back the way I'd come: 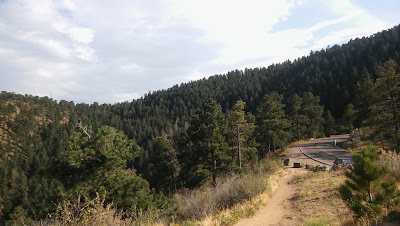 and down to the city below: 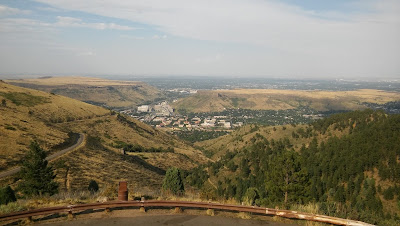 then continued down to Golden proper. Now a suburb of Denver, this former mining town was once a contender for the capital of Colorado (and never quite got over losing the battle to its neighbor, as the banners hanging along the main street implied). I drove past the Coors/Miller brewery, which had the whole block smelling like hops, then parked by Clear Creek and stepped out for a look around town. 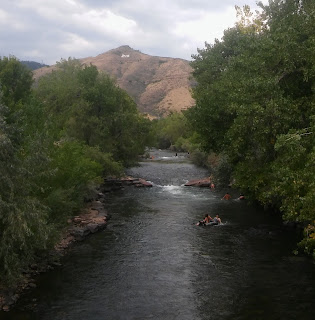 It was quite the lively place, full of shoppers, pedestrians, dog-wakers, toe-dippers, inner-tubers, and even a handful of Pokemon Go-ers. I walked a few laps around the creek to refill my inventory take in the sculptures and historic markers:

until the daily monsoon rolled down from the hills. It scattered the crowds and sent me dashing back to my car, holding a freshly-caught Pikachu over my head as a lightning rod.

I waited a while for the storm to abate--it didn't, of course--then headed back to Denver through the evening rain. At least these highways didn't flood. I'd texted Nancy of my plight while still in Golden; she welcomed me back for the night, so there I stayed again: the defeated would-be mountaineer.
<--prev | next-->
Posted by Stoat at 5:00 PM