That night I camped in Apple River Canyon State Park, a quiet little place tucked, as the name suggests, into a canyon carved by a tributary of the Mississippi. Though I'd found the place by my usual unselective method of pulling up Google Maps and zooming out until I spotted a patch of green, it turned out to be another hidden gem of the state park systems, much like Tishomingo State Park in Mississippi. No flush toilets, but the campsites were cheap and spacious and self-registrable (for which I was grateful, having arrived, as always, after staffed hours). Tired from the day's drive, I pitched my tent, chowed down on my now traditional peanut-butter tortillas, and conked out.

So that was the first day of my journey away from home. It felt oddly normal, I must say, like any other "there and back" trip, only without the "back" this time. I felt no internal sense of how far I'd come, no twinge in my gut to tell me I’m going the wrong way. But the Midwest doesn't feel all that different from home, so far. There's still the same humidity, the same trees, and the same road signs (those, at least, will be a constant all through my trip across the US)--nothing to say that the Sleepy Hollow Rd. I passed in the Chicago suburbs wasn't just some unknown stretch of the one that runs by my house. At least not yet...

I woke in the night to a scuffling sound just outside my tent. My ears pricked, listening through the blind night and my tent's opaque rain cover. The sound continued; something was out there. A bear?--no, not here in Illinois--possums? Raccoons? Perhaps. I sighed in relief. No doubt the critters would soon move on, for there was nothing in my camp to interest them, not with all my food sealed up in...

...my car, whose windows I'd left cracked after dinner. That's what they were after.

I fished my keys out from their hiding place, beeped the car to scare them off, then crawled from my tent to inspect the damage. Thankfully, there wasn't much; the window gap was too narrow for them to get in (though one can only imagine the contortions they'd gone through trying). All they'd left were a few dusty footprints on my windshield.

I closed the offending windows, locked the car up tight, and returned to bed, more shaken by what could have been than by what was. If I'd made the same mistake in bear country, or burglar country... well, hopefully now I wouldn't.

The next morning, I took a walk around the bottomlands before heading out:

As I discovered, the park protected not only the canyon, but also the former site of a town called Millville. Not much remained of the town (like Cairo, IL, repeated floods had done it in) besides a plaque on a rock and an old rotting tree:

Signs around the field told of the town's growth from a two-family sawmill town to a major stop on the stagecoach route between Galena, IL and Chicago.

I wandered over to the riverbank: 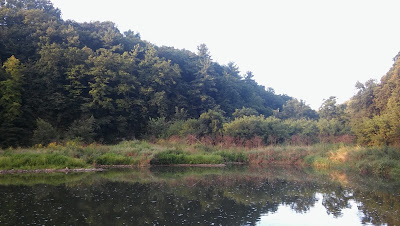 then on to the far end of the field, where I discovered a trailhead leading to a place called Tower Rock. 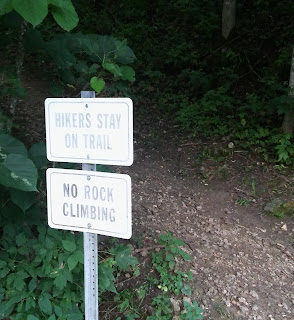 A rock formation? Count me in.

The trail sloped steeply (for Illinois) up at first, then guided me through the spiderwebby woods atop the bluff. It hewed close to the edge, but not close enough to allow downward views--the rock was crumbly and the soil loose.

A mile later, I skidded down another dirt slope and found myself at the base of a detached pillar of rock that towered (for Illinois) over the canyon in defiance of the waters that had carved away its neighbors. A table-wide ledge beckoned a third of the way up the rock; I scrambled up to it, thinking it would be a nice spot to eat my breakfast.


But, of course, once I'd made it that far, the rest beckoned. I scampered up the next series of holds, then paused. A second ledge jutted out above me, blocking my ascent. If I could get up onto it, the last few moves would be easy, but how...

Just then a voice spoke to me. "What's the hold-up?"

"Hey hey hey, wait just a minute," the rock replied. "So I've got a big ol' ledge. So what? You can't handle a bit of a bulge? I guess you’d rather zip up one of those anorexic little spires, huh? Well, let me tell you, cliff-shamer, that real boulders have curves, and if you can’t handle me at my worst-"

I resumed climbing just to shut it up. A few tricky moves (and some frantic cobweb-clearing), and I'd made it. The rock was flat on top, marked with the graffiti of previous climbers. Out here, above the trees, I could see all the way up the river: 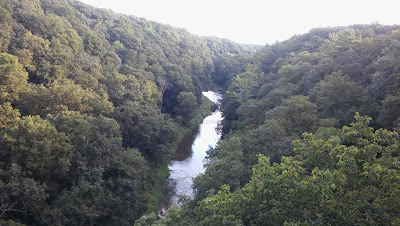 a fitting reward for my efforts, and a far better view than the official overlook down the trail. So. Down?

...and soon found myself stuck on top of that same stupid ledge. I dropped a leg... no holds in reach. Sat down, legs dangling, and reached out an arm... nothing.

The rock chortled to itself. "Give up, hiker-girl, there's no way down. Not if you can't even turn around to face me."

Turn around... aha, that was it! Gripping the rock, I swung around and lowered myself over the ledge, probing for footholds.

"Better, but you're not smiling. Smile at me, girl, and say I'm beautiful."

-and just then, like magic, my foot found a hold. Gripping the ledge, I swung my other leg around, then hopped down to the breakfast ledge.

The rock loomed over me once more, pride gleaming from every grain of its bulk. "And don't you forget it."

I scrambled the last few steps down, then scurried off into the forest. So that's why they'd warned not to climb the rocks. 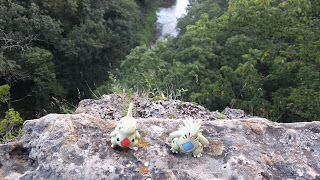