Did you know that the western third of South Dakota (and the corner of North Dakota I visited) is on Mountain time? Neither did I until I reached Faith, a tiny town on the South Dakota plains that was home to the first civilization (read: gas station) I'd seen in hours. "Next Services 53 Miles," my tail. The gas was expensive, but I filled that tank all the way up--what choice did I have?  Afterwards, I popped into the convenience store for a snack. As I ate I leafed through the local newspapers, which were full of local ranch news and columns like "Ramblings of a Conservative Cow Doctor." In the process, I realized just how little I knew about farming and ranching--I couldn't tell a hay baler from a milking machine if my life depended on it. Perhaps we all ought to put a little more thought into how the food we eat is grown and raised.

I headed north again from there, then turned west onto US-12 at Lemmon, ND.The fields all around were a sun-scorched orange, empty save for the stray herd of cattle (or possibly buffalo, though I couldn't spare my eyes from the road long enough to tell the difference). Tumbleweeds (for real!) cut across the road in front of me, as did several foot-high, squat, terrestrial birds--prairie chickens!

Though the late-afternoon sun left me half-blind, I did my best not to run them over (to my kid brother's disappointment--Joey, you monster, those chickens have families).

I arrived an hour before sundown at Butte View Campground in Bowman--just enough time to pitch my tent and stuff down some dinner before the sky god turned out the lights.

Anticipating high plains-winds, I pitched my tent in the lee of my car, but left the raincover off, having learned my lesson from that mosquito-deathtrap I'd made in Ogema. Best not to use it unless it's actually threatening to rain. I snuggled into my fluffy-warm down sleeping bag, watched the sun set: 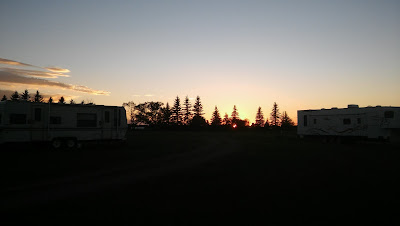 and was almost asleep when the thought came to me that if anyone tried to pull past my car into the grassy space behind my site--particularly if, like most locals, they drove a tall, high-clearance vehicle--they'd have no way to see my tent in the dark, so ker-splat! dead hiker. I peeked out from the tent: the campground was still and silent, nothing but rows of RVs casting moon-shadows over the silver grass. I most likely had nothing to fear.

Of course, now I couldn't sleep. The hammer would fall, whispered my anxious mind; the piston would push, the wheels would grind--it was only a matter of time...

...and sure enough, several minutes later some headlights came up the hill and headed straight for me. I panicked and shot out of my tent, still half-in my sleeping bag--don’t kill me!--but it was only the campground hosts checking in with their late registration (me). And yes, they had seen my tent--but just to be safe, after they left I draped my day-glo orange Gore-Tex jacket over it. Miss that in the dark.

Fortunately, after that incident I slept uninterrupted (save for the 4 am train--those things are loud, especially when you're lying on the ground a quarter-mile from the tracks). I woke with the sun, as always, but spent a good long while lounging in my bag and listening to the birdcalls. I heard mourning doves in the mix, a flock of Brewer's Blackbirds cackling as they picked over the campground lawn, and some odd rhythmic cooing I'd never heard before (the grouse-chickens?), though I couldn't spot its source. Eventually my sense of urgency overcame my laziness; I forced myself out (coldcoldcold!), put on some proper clothes for the chilly Dakota dawn, broke camp, and headed north to the other butte.

45 minutes later, I arrived in Amidon, the self-proclaimed "Smallest County Seat in the US"... and two blocks later, I left. White Butte was twenty minutes up the highway, down a few gravel roads lined with wild sunflowers: 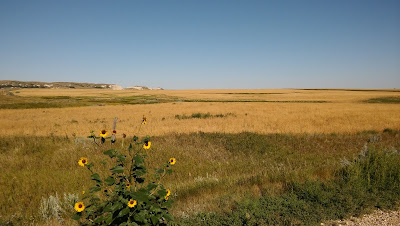 Of all the state high points I've seen, North Dakota's is definitely the least-heralded. At first I wasn't even sure I'd found it--the only sign that I was anywhere special was an oversized mailbox soliciting donations:

I parked beside it, fed it the recommended $10, and suited up for the hike. I'd heard that rattlesnakes frequented the butte on hot summer days, so I kept my long pants on and carried my big heavy walking (thwocking?) stick. Phone, notepad, Larvitars... I was all set. I started up the trail--then, five steps in, ran back to fetch my water bottle. Not making that mistake again.

The first half of the trail (about 3/4 miles) was an old dirt road-trace that made a beeline for the distant butte:

Not far from the car I passed a herd of goats wandering free through the adjacent hayfield: 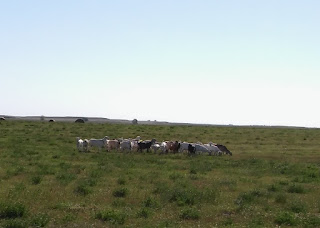 with nothing to separate them from the trail. I passed with caution; they let me be. For now.

The trail continued through the fields:

weaving over sand and grass up the gradual slope to the butte. As I drew nearer, I passed alongside a row of white sub-buttes trailing up to its plateau: 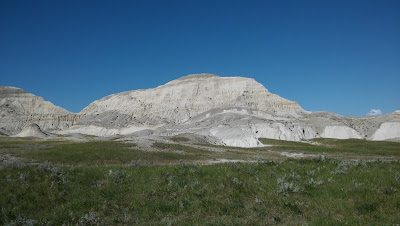 Shortly afterwards, the road ended. I passed through a metal gate:

and into a butte-crack valley:

The slopes and rivulets of the butte-walls gave the impression of water-packed sand, and the rock wasn’t much more stable, about the consistency of a stale sugar cookie. Scattered across the valley were round gray rocks of a noticeably different type: 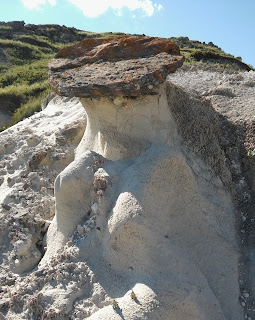 As the Lars enjoyed their snack, I wondered how those rocks had gotten here. Were they sprayed from some ancient volcano? Abandoned by a retreating glacier? Hard to say.

From here the trail got a lot steeper. Though it didn't require any real scrambling, I had to dash up a few crumbly sand-slopes and weave my way through some stretches that were eroded waist-deep. The thin footpath twisted up onto the butte-top, through a brief patch of trees and thick green grass, then arrived at a flat stretch that seemed a replica of the fields below. Almost there now, right?

Not quite. A second butte rose up beyond the first:

The trail wound up the side of that butte, offering a view into a forested valley that lay beyond:

From there, it was only a short (and rattlesnake-free!) ways to the top:

At the summit, I stood on a platform of rippling grass and looked out at the country below: 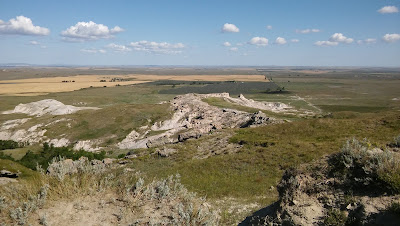 The sky above me was a magnificent blue edged with a pattern of cumulus clouds: 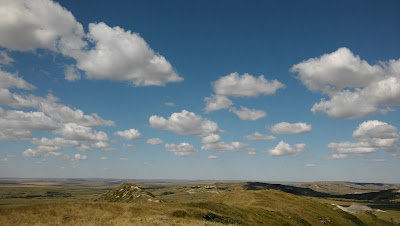 I leaned into the butte's updraft and raised my anti-rattlesnake-stick to the sky. Surely this was a place where the shamans of old came to praise their god, that which animates these plains, setting the grass to grow and the wind to blow and the rain to fall all in its time. Up here on the butte, on this impossibly beautiful day, for a moment I wanted nothing more than to do the same.

Once I came down from my little transcendental moment, I signed the summit register (most of my fellow visitors were out-of-town highpointers—not surprising, since there didn’t seem to be many locals) and began my descent with plans for a summer-yurt up here dancing in my head.

The whole way down I was feeling pretty good, high on the unexpected beauty of the Dakotas and relieved to have missed the butte-snakes (I later learned that in warm weather they’re more active at night than during the day).

And then I saw the goats up ahead. They were on the trail now.

The flock scattered as I approached, then regrouped and slowly returned, two dozen goats staring me down with their four dozen creepy goat-eyes:

I tried all the things one’s supposed to do in the presence of threatening animals—puffed myself up big, made eye contact, brandished my stick, and shouted at them—but no dice. The eye contact only called them closer. So I turned my back on the cloven-hoofed horde and walked steadily towards my car (fearing to run lest they stampede after me). Every few moments I looked back—they were still following, but the gap between us was growing and I was almost to my car... just a few more strides...

...and then up the road came a blue pickup truck. I leapt aside; it continued past me and shooed the goats off my tail and up the trail. My saviors, I suppose. Had they looked out the window of their farmhouse and seen me descend straight into the maw of their goatish menace? Had they heard my shouts of horror? Or was it just time for the flock’s daily feeding? Either way, I'd lucked out, because I swear, by the way those goats looked at me, they must have either thought I'd brought their supper or that I was it.
<--prev | next-->
Posted by Stoat at 10:17 PM