The grim clouds that lingered over the last of Minnesota broke as I crossed the border into South Dakota. I shot through Sioux Falls at 70 mph... and then, just past the last exit, I spotted a pair of numerals I'd never thought I'd see beneath "Speed Limit": 80. My home state's threshold for reckless driving was the legal limit here. 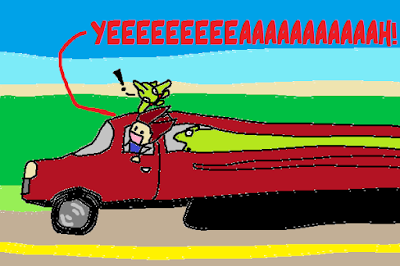 Then again, that highway was arrow-straight and uncannily flat. I zoomed on down, passing RVs left and right--turns out they're not just a thing in the Midwest, but everywhere west of the Mississippi. Vast fields of corn stretched in every direction:

blocked only by a bright parade of billboards urging the cross-country traffic to stop in at various museums, hotels, RV parks, and president-marred mountains. Yep, the signs for Mt. Rushmore started at the border, over 300 miles from the Black Hills, and continued all the way through the state (though, thankfully, only on the interstate itself).

Back in Minnesota I'd noticed these gates at intervals along all the major highways that could drop down and close the road. A regional oddity, I'd thought, but they kept popping up all through the Plains states on everything from interstates to state routes. A few were even equipped with signs that read "IF GATE CLOSED, TURN BACK TO [NEARBY TOWN]." At first I thought they were there for tornadoes, to keep cars from driving straight into the funnels and to block off ripped-up sections of road, but when I looked them up I discovered they were blizzard gates. Remember those giant plain-rainstorms from the last post? Now imagine them bigger, meaner, colder, and dropping opaque flakes. I wouldn't want to drive in that either, but apparently some folks are desperate enough to try, so they have to straight-up close the highways during the worst storms so that highway personnel can clear the roads without obstruction (and without having to divert their efforts to search-and-rescue).

A few hours in, I-90 came suddenly upon the Missouri River. And I do mean suddenly: from perfectly flat plains it dropped like a diving hawk over crumpled bottomlands to the cerulean waters of the river. The old song spoke true; it was very wide indeed. Beyond, the plains rose even higher, broken up by water-carved hills: a plateau in the process of dissection.

I left the highway at Vivian (like magic, those annoying billboards disappeared) and headed north towards Fort Pierre, SD, a small town just across the river from the state capital. I arrived right around lunchtime, so I hopped out on the edge of town to take a look. Just down the street was another confluence, this time of the Bad and Missouri Rivers: 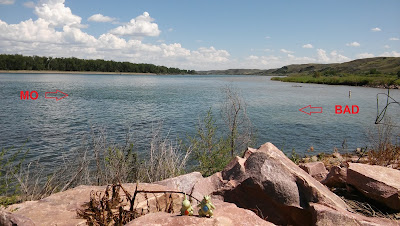 A cormorant perched on the rocks (awfully far from the habitat its name would suggest), but dove into the water as soon as it saw me coming.

I wandered further into town to see the sights (read: hit all the PokeStops). Those little blue diamonds led me to the Verendrye Museum, which housed a collection of local artifacts: 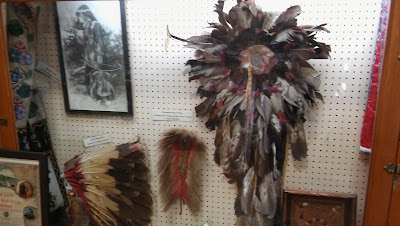 and historic clothes and tools: 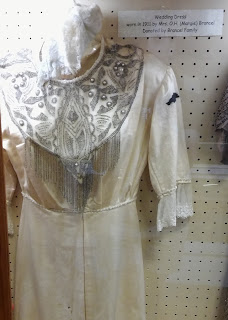 which, being from the Old West, leaned heavily towards the pastoral: 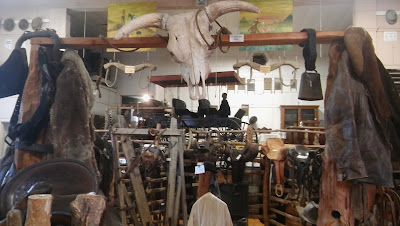 The centerpiece of the museum was an old metal plaque placed on the plains in 1741 by the Verendrye brothers, two French Canadian explorers who were searching for a water route to the Pacific. They were pretty far off, as we now know, but they did get to be among the first Europeans to see the Dakotas.

I spent a while in there examining the exhibits, reading the plaques, and storing away ideas, then continued on my way.

The road out from Ft. Pierre was just as flat, just as straight, and, though not a limited-access road, in practice almost as fast as the interstate had been. At the last cross street I saw the first of many "Next Service: X Miles" signs I'd pass (and always be slightly disconcerted by) on this Western leg. My gas tank was below half-full, but in this case X was only 53, so I figured I'd be fine.

The afternoon brought scattered showers again, but smaller and sparser than the previous day's--I was headed into the arid half of the continent. The tiny storms were too small to fill the sky, which left it with an odd indecisive look. On one side, there'd be perfect weather:

and on the other, a miniature monsoon:

At one point I even found myself driving between rainstorms.

But the sky god couldn't just leave my windshield alone for a day--oh no, not until every last flake of apology had been shaken from the plastic liner of my box. Rather than water, my car kept running into these huge swarms of flies who splatted against my windshield one by one like sticky insectile raindrops. Gross, indeed, and worse than rain, since the wipers only smeared the mess around. What more do you want, Pamola? Do I need to sacrifice a decoder ring or something?

I turned north again at Howe's, a lonely (and gas-pump-less) general store Google Maps had somehow mistaken for a town. The roadside fields transitioned from corn (a big, water-guzzling crop) to hay, rangeland, sunflowers (their thousand faces turned in unison towards the sun), and, occasionally, just nothing--no crops, no bales, no cows, just grass stretching to the horizon. Desolate, some might say, but I found it quite serene. As I drove on through the plains, the only car in sight, I found myself imagining what it all looked like before they'd lain down roads and strung up fences, a land without boundaries set by nature or man...
<--prev | next-->
Posted by Stoat at 6:16 PM