Side trip: PANIC! on Lake Superior, or The Near-Wreck of the Old Honda Accord (600')

The legend lives on from highpointers on down
of the big lake they call Gitche Gumee.
The lake road, it is said, never gives up her dead
when the skies of mid-August turn gloomy.

The car was the pride of a hiker named Stoat,
loaded down with her worldly possessions.
As mid-size sedans go, it was bigger than most
with driver and Pokemon well-seasoned.

They were headed southwest from that old raven's nest
Eagle Mountain, a hill they'd been climbing
As they turned from the forest to highway they saw
they'd got down with impeccable timing.

For upon the horizon there loomed a grim storm
that behind them all day had been brewing.
The thunderheads scowled at the traffic,
as if to say, poor fools, what are you doing?

So Stoat searched for hotels up and down the North Shore,
but the nearest she could find was Duluth.
'Twas an hour-and-half drive if the car stayed alive,
but at that point, the best that they could do.

As the first raindrops fell on the coastal highway,
both the Larvitars started to worry.
Stoat turned on the wipers and cursed at the clouds--
(for the last time, Pamola, I'm sorry).

The clouds emptied out like a broken bathtub,
and straight at them the wind was a-blowin'
It got so bad that even with the lights on
Stoat couldn't see which way they're goin'.

So she pulled to a stop down a side road to wait
for the precipitation to slacken.
The Larvitars cow'red in the shade of the firs
As silver-white lightning was crackin'. 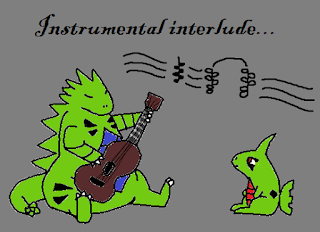 Now Stoat passed the time idly skimming her maps
to learn about the lay of the land.
And what to her wondering eyes did appear,
but just west of them, a place called Finland?

Of all the old towns of the Upper Midwest,
this one was surely the quintessence!
After driving for days and camping out for nights
this chance to visit just could not be missed.

For surely they piped folk metal through the streets
and each townsman knew the Kalevala,
They'd ride out to greet her on reindeer
and call out a welcoming Hyvää iltaa!

When the rain finally slowed, her decision was clear:
up the hill! to that magical township!
But little did she know that with every delay
she risked taking her Honda for a dip.

They climbed up to the thunderclouds, then dropped below
to the town, turning switchbacks with care.
But to their surprise, when they reached the town sign
there was practically nothing there.

A restaurant called "FOOD" and a general-store mural
were all that distinguished this Finland.
Stoat sighed, took a picture, and turned right around
back to lake, as the rain picked up again. 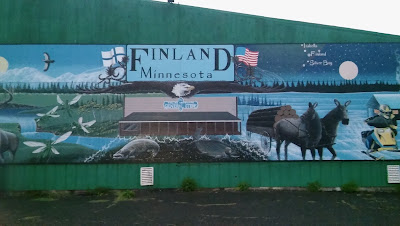 They'd only made it a few miles down
when that old Honda hit the first puddle--
an understatement, if there ever was one,
for its length was a lane-width, but double.

It soon became clear that each dip in the hills
hid a flash flood of epic dimensions,
and a single drop down the ol' tailpipe would render
the engine a dead lump of iron.

Now, Stoat, in her pride, could not bear the remarks
they would face if the poor car was stranded.
The rescuers would say they'd have made Silver Bay
if it weren't for that silly diversion.

So rather than risking a ruinous wreck
she pulled o'er--again--at a gas station
The Larvitars prayed for the highway to drain
as the last rays of light fled the nation. 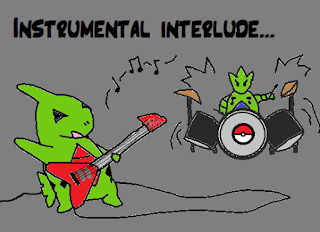 After half an hour of waiting in the dark
the rains finally slowed to a sprinkle.
And out on the road, people struggling for home
brought the traffic from none to a trickle.

Stoat summoned her courage and started the car
sayin', Fellows, it's been good to train ya.
And as they pulled out onto that deathtrap road,
MomMom said, "Lar, my baby, I love ya."

Does anyone know where the sky god's love goes
when his storms turn the minutes to hours?
To keep the car going any faster than 40
on that road was beyond Stoat's power.

Other cars whizzed by--locals, presumably--
flashing brights, honking, and left-lane passing
It still escapes Stoat to this day how those folks
had any clue where they were going.

But under the tunnels and over the hills,
they progressed, mile by mile, as cars will do.
and though its headlights bounced right off the wet road--
thank Pamola!--the car's traction stayed true.

'Twas near to midnight when the car did alight
on the dry and well-lit streets of Duluth.
The journey was hard, but out of sheer stubbornness,
Stoat and the Larvitars got through.

The legend lives on from highpointers on down
of the big lake they call Gitche Gumee.
The lake, it is said, rarely gives up her dead
when the big storms of August break early!

[Note: All flaws in the meter and/or rhyme scheme of this parody are not mistakes, but tributes to the magnificent awfulness of the original.]
<--prev | next-->
Posted by Stoat at 5:15 PM