The eastern third of Colorado is much like Nebraska, Wyoming, and the Dakotas: gently-rolling plains as far as the eye can see filled in with a tricolor palette of corn, hay, and soybeans. From the Nebraska high point, I drove a long way down a gravel road, my eyes fixed on the western horizon. Any minute now, I thought, as trucks full of hay bales whizzed past in the opposite direction. One more mile, one more rise, and I'll see them at last, the skysplitting Rockies of my dreams.

The gravel turned to pavement; a small town flickered by. Flat and straight the horizon remained, clogged with dull clouds. Another dozen miles, a slightly larger town, and then just as a few grubby brown foothills resolved out of the murk, I hit I-25 again at Fort Collins and turned away from the Front Range. No Rocky panoramas for me today. Oh well; there'd be plenty of chances for that later on, I figured.

Though I re-entered only 50 miles south of where I'd exited at Cheyenne, the highway was noticeably more crowded--which meant, of course, that it was full of Northern-Virginia-grade tailgating going on at Wyoming speeds. After a tense hour of mentally begging giant SUVs not to crush my bumper, I pulled off at Denver, the Mile High City home to mediocre pitching, high-altitude cooking instructions, and, as of late, weed dispensaries (at least half of which were named some variant on "Rocky Mountain High"). I generally avoid major cities while traveling, but my aunt's friend Nancy, a local, had offered to host me for a night on my way to Mt. Elbert, so here I was.

Her place wasn't easy to find--the streets of the Denver grid split, rejoin, and swap names like a bunch of cells undergoing meiosis--but once I got there, Nancy and her boyfriend were quite welcoming. I hung out with them through the evening, then turned in early to take full advantage of the soft warm bed they'd so generously prepared for me. After a week and a half of camping and cheap motels--and with another few weeks of the same to come--it felt unimaginably luxurious.

Ask a random person which US state is the highest, and they'd probably say Colorado. They'd be right in many ways--it has the highest mean elevation (6800'), the highest low point (3317', where the Arikaree River crosses the Kansas border), and the most distinct high peaks (53 over 14,000') of any state. But contrary to popular belief, its high point, Mt. Elbert, is not the highest (that honor goes to Alaska's 20,310-foot Denali), nor even the highest of the lower 48 (California's Mt. Whitney narrowly edges it out at 14,505' to Elbert's 14,440'). Furthermore, despite its elevation, most highpointers rank Elbert as one of the easier Western summits. Its nontechnical, relatively gentle slopes have allowed children, pets, and even the somewhat-out-of-shape to reach the top. The only real dangers are the weather--Elbert, like most of the southern Rockies, is prone throughout the summer to afternoon thunderstorms--and, of course, altitude sickness.

Knowing this, I'd planned to drive up the next morning to the South Mt. Elbert trailhead and spend the rest of the day and night acclimating at 9000'. I'd start up the mountain at first light the next morning, hoping to hit the summit (five miles and 4600' later) before noon, which in turn should allow me to get back below treeline before the daily monsoon hit. The timing would be tight, but if I kept the same pace I had up Mt. Washington in June (the only trail I'd climbed with a remotely similar grade), I could probably make it. Nothing to worry about, right?

I'd only be climbing four thousand feet higher than I'd ever been in my life at the risk of being struck by lightning in the widest, most exposed zone of alpine tundra I'd even seen. Nothing to worry about, indeed.

The next morning I got my oil changed in town (for the second time this summer, and after starting the season with fresh oil), then headed up into the mountains on I-70. The section of highway I was about to traverse is a marvel of engineering, rising over six thousand feet in sixty miles from the plains of Denver to the very spine of the Rockies. I'd cross the Continental Divide at the Eisenhower Tunnel, the highest point of the Interstate Highway System at 11,158' above sea level. From there I'd continue on another twenty miles to CO-91, then head south past Leadville to camp at the foot of Elbert.

The first rank of the Rockies are more like Grassies, I reflected as I rose, as if some massive force had slammed against the plains below, crumpling them like a discarded draft. The trees kicked in above the first rank of foothills: deep-rooted Ponderosa pines like those that covered the Black Hills. I climbed up and over the shoulder of Genessee Mountain, down a brief ways, and then up again through a narrow, shadowed, creek-carved valley through the surrounding mass of rock. The highway's grade, already steep, increased. Idaho Springs flashed by, Dumont, Lawson--tiny hamlets squeezed in by the mountain walls. The valley shrunk to a single road's width; the local route wove underneath the interstate, then turned aside at Georgetown, where the incline spiked again. I punched the gas in anticipation but felt nothing--my engine was already working the hardest it could. So I--or, rather, we, the entirety of both westbound lanes--slowed, held back not by traffic but by gravity as we ground our way up towards the jagged brown peaks...

…but then, at around 9000 feet, something changed. My chest tightened; my heart rate rose; my fingers tingled. My face flushed despite the alpine chill. I tugged my seat belt off my chest, but still felt its restraint. It was as if the mountains themselves were wrapped around my lungs, slowly squeezing them shut.

I peeled right off the road at the next exit (Silver Plume, 9100'), re-entered eastbound, and descended as fast as I could to the valley below. My anti-lock brakes kicked in as I pulled off the highway at 8500'. I drifted to a stop at the shores of Georgetown Lake: 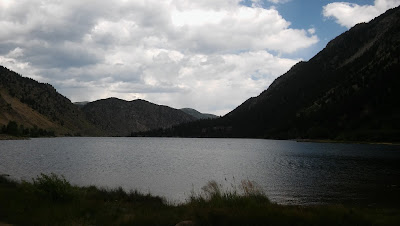 and let my panic flow free.

Seriously? I couldn't even make it up the highway to the trailhead? Clearly, I wasn’t acclimated, but what I'd just felt… that was more than just plain altitude sickness. Altitude sickness is fatigue, dehydration, a mild headache--what I'd felt in the Black Hills, I realized. This was something else entirely.

Around me, tourists strolled the streets. A man was fishing in the lake a few feet from the parking lot. Another car pulled up; out came a pack of teenagers with a quadcopter. They all could breathe just fine in these mountains. Why couldn't I?

My chest was still tight. I returned to the interstate to descend further... but I hadn't gone far before I found myself stuck in bumper-to-bumper traffic--road work. No, I thought, I need to get down. I can't breathe here. LET ME DOWN!

The truck ahead of me scooted forward a car-width.

And so I waited, straining for breath, for the traffic to clear. It slid down the valley like a glacier, inch by inch returning to the altitudes of ample air. And as I sat there, I realized how lucky I was. If this jam had happened a thousand feet higher, or if anything else had blocked my one route of descent, I'd be stuck up there in the hypoxic highlands. Had that happened before, I wondered? Had any other drivers gotten altitude-sick on this highway while hemmed in by traffic? Had they grown dizzy, fainted, lost control of their vehicles?

We passed the obstruction at last; traffic resumed its normal speed. I descended to 7000', then pulled off again in the foothills.

Why? I repeated as I drove aimlessly through the mountaintop neighborhoods. Why couldn't I breathe up there? I'd spent the last several days above 4000', hiked up to 7200', slept a mile high last night--why wasn't that enough?

Who can say? The risk factors for altitude sickness, the things that make one person more susceptible to it than another, still aren't well understood. It strikes down hikers seemingly at random: young or old, fit or not, anyone who ascends faster than their body can tolerate. The only reliable marker is that if you've had it once, you're more likely to have it again. One can always ascend slowly, taking the proper time to acclimate, but...