I woke to find several of that mosquito swarm stuck between my tent's raincover and the mesh shield. I extricated myself carefully, then whipped the raincover off, sending several (I hope) to their deaths. Then, quickly, before the survivors could return with reinforcements, I stowed my tent and set off for the state line.

The long road to the Land of Clouded Waters was draped in fog that morning. It thickened as I drove, then gradually lifted--and yes, that's exactly how fog dissipates, rising inch by inch from the ground with its threshold held level until it joins with the overcast ceiling.

While stopped at a road-work site, a bald eagle flew over my car. They must love this place, I thought, with all its lakes and bogs and sportsman-stocked ponds full of fish. The woods are popular with human hunters, too. Along US-53 I saw a sign for “www.deerpee.com,” a local business that sells exactly what you'd think it does (for use as an attractant). How did they extract it? I wondered as I passed. Some kind of elaborate deer-diaper-funnel apparatus, or the old-fashioned way, by hand? And do the (presumably captive) source-deer know their urine is being used to lure fellow members of their species to their deaths? That's some sci-fi horror stuff right there.

At Trego, WI, I passed beneath some scary dark-looking clouds. They weren't quite ready to burst (it was still well before noon), but for a while they seemed to be following me north. Realizing this, I punched the gas and left them behind.

An hour or so later, I found myself suspended in the air on a massive metal bridge crossing the St. Louis Bay from Superior, WI, to Duluth, MN. The bridge launched me into a traffic engineer's fever dream of ramps and tunnels that shunted traffic over, under, and through the industrial waterfront.

We drivers like to fantasize that we're the ones in control, the king or queen of the road going whither we please, but faced with that level of complexity the illusion falls away, revealing the desperate, squinting, sign-following ants that we are.

But this time, at least, I read the signs correctly, and wound up northbound on I-35 along the shore of Lake Superior.

Duluth struck me as an interesting town, with its history written in the abandoned steel tanks and boarded-up factories scattered across its waterfront. Like many other Great Lakes metropoli, it had its industrial heyday in the early 20th century, when iron from the Duluth Hills was shipped down the Great Lakes to feed the factories of the industrial Midwest. But the high-grade ore ran out in the late 1950s; though lower-quality taconite is still mined in the hills, the town has since shrunk and shifted its economic emphasis from manufacturing to tourism. Tall hotels and office buildings lined the landward side of the highway, fading out to residential areas in the hills northwest of town.

As I hit the suburbs, I-35 shrank to MN-61, casting off the interstate highway system's stringent standards before wrestling the rough, rural Superior coastline. As I later learned, most of northeastern Minnesota is given over to national forestland; few towns there have as much as a four-digit population. 61 is the region's only north-south highway, and thus the only route to Eagle Mountain, the state's high point--and the only route home from it.

Lake Superior more than lived up to its name. I pulled over for a closer look at a roadside beach just outside town: 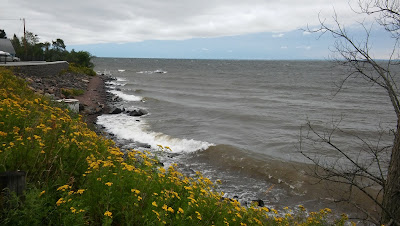 The waves rearing up at me were downright oceanic, blown by winds stronger than I've felt at most summits so far. Ol' Lake Erie was a puddle compared to this monster.

But the countryside along that terrible lake was surprisingly beautiful: 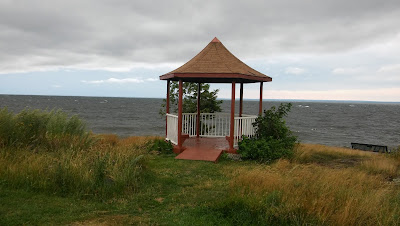 The road hewed to the lake, shielded by an intermittent border of trees and coastal dwellings. Yellow flowers grew in abundance by the roadside beneath iron-red cliffs (I later learned those flowers were an invasive species of tansy, though that doesn’t mean they’re not pretty). To the left rose great hills, blanketed in a dark-green northern forest, that sloped steeply down to the slate-gray sea. Dead birch-trunks stuck out from the canopy like skeletal fingers. Above was a complex array of clouds, pierced at times by the sun but so dark around the edges that I couldn't tell if blue sky or thunderheads awaited. If the former, I'd have a lovely hike, but if the latter...

For now, though, the weather was fair. I passed by the town of Larsmont (LarLar wanted to stop and visit, but we had a long way still to go), and through some tunnels, then shot up the tourist causeway of the North Shore. The road was lined (sparsely) with hotels, souvenir shops, and even some Finnish cultural exhibits I hoped I'd have time to visit on my way back. I'm rather a fan of their culture and music, as you might know if you've ever stolen my iPod. But on I pushed to Lutsen, where I turned from the lake to head due north into the forest.

After a steep drive up engine-busting hills (on which I rose over a thousand feet from the lakeshore) and down miles of gravel roads: 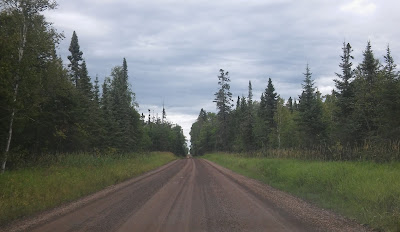 I reached the trailhead in Boundary Waters Canoe Area Wilderness in Superior National Forest. The parking lot was full, to my surprise--it must be a popular hiking destination for locals (I say because everyone I passed on that trail had an Upper Midwest accent... and 90% of them were blonde). The trail required self-issued permits, by which I learned that camping, as per my itinerary, was definitely not allowed there. Not that I’d have wanted to stick around with the local mutant monster mosquitos attacking every inch of my exposed skin, including my face and the back of my neck. There had appeared to be lots of options for lodging back on 61, though, so I figured I could find something when the time came. I put the matter from my mind and headed up. 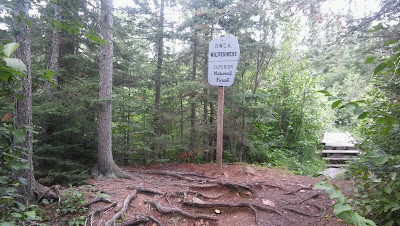 The woods--a low, lichenous collection of spruces and birches--were eerily silent after half a day of road-noise, just like the Adirondacks. There must be something about these northern woods--few creatures that live there dare to break the silence. An interesting variety of wildflowers lined the trail: 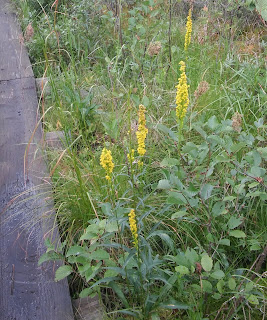 along with some tasty looking berries: 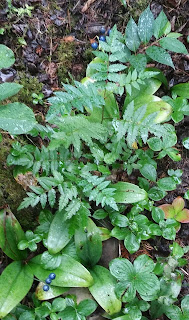 but those were probably poisonous, so I didn’t touch them.

The trail itself, though rough and root-strewn, was mostly flat for the first two-or-so miles. It passed over a handful of boggy rivers (or riverlike bogs, I'm still not sure) on flat plank bridges, then wound through the woods to the shores of Whale Lake:

where it split. One fork wandered off towards a second lake; the other turned to ascend the mountain. I took the latter.

That trail, which curled along the south slope of the mountain, was rocky in places, but far less so than Katahdin and the other Northeastern peaks.

The red rocks and glades along the way reminded me of the trail to Mina Sauk Falls back in Missouri… but if any scorpions can survive the Minnesota winters, I sure as hell don’t want to meet them. After 3/4 miles of climbing, the trail dissolved into a big glade near the summit. I hopped to the edge of the rocky escarpment, taking in the wide south-eastward-facing view:

It was nice, but not the high point. So I bushwhacked up the incline through the brush of the glade... and sure enough, the trail continued past it. Beyond, a short way through the woods, lay my prize: a plaque and USGS disc marking Minnesota's highest point:

I returned to the glade, pointed some lost (blonde!) ladies towards the high point, and descended.

The way down was uneventful save for a quick, cold rainshower that ambushed me halfway through. I threw on my Gore-Tex and kept going; it was over before I reached the parking lot:

Was that the worst those rainclouds overhead would bring?

I swapped out my muddy boots, spread my raincoat over the backseat to dry, and headed south towards the lakeshore, keeping an eye on the sky.
<--prev | next-->
Posted by Stoat at 9:46 PM