I began my Western leg in earnest with a long drive from Lake Erie to western Illinois. My first challenge, as I headed out at dawn, was getting to the interstate. Shouldn’t be hard, I’d thought, since this Cleveland suburb’s streets were on a grid... but they turned out to be a grid drawn by an attention-deficient toddler, full of three-way intersections, missing links, and random squiggly river-roads. After minutes of circling I finally found a ramp onto I-90/80W and immediately realized why there were so few of them: each one required a plaza to collect the highway’s toll.

$10.50 later, I was back in Indiana, this time on the Indiana Toll Road that runs across the state just south of the Michigan border. A sign at the border welcomed me to "The Crossroads of America"—a proud flyover state. Even its toll tickets were helpful, with a handy grid printed on the back that listed all the exits and the cost to travel from one to another. This is how toll roads ought to be done—if they must, only if they must. Certain other states (*cough cough* Illinois) ought to listen up.

From here, as expected, things got flat and rural. Not the grand open flatness of the Great Plains, though, but an odd claustrophobic flatness hemmed in by trees and buildings. The world seemed to shrink: there were no distant hills on the horizon to remind one of its vastness and no sudden panoramas around the bend, nothing but whatever lay between you and the nearest vertical structure... corn, most likely, for the good ol’ Midwestern Monoculture held sway here.

A line of cumulus clouds appeared on the horizon as I neared Gary, IN, a town of flat gray factories at Lake Michigan’s southern end. Harold Hill’s praise of the town was hyperbolic, but at least their gas was cheap. From there I switched to I-294, which I hereby rename the Toll Road From Hell. For starters, it was the first time that I’d encountered NoVA-level traffic west of the Atlantic coast. The tolls in question were damn expensive, too--$1.50 every ten miles. But the worst part was that they collected these tolls not with tickets, but by stopping traffic every ten-or-so miles to route us through toll plazas. The dead-eyed employees of these merciless plazas returned change with the smug assurance that the quarters in question would heed the call back to their coffers, for the road would not end until they’d bled us dry mile by mile, inch by inch... or until we gave up. I jumped ship just short of I-90 in favor of the local route.

IL-72 began as suburbs, much like home, then gradually grew rural. At Starks I turned onto US-20. I took a detour around some construction in Rockford, IL that spat me out onto what appeared to be 20, but was actually a road that ran parallel to it, briefly, then curved back around to circumnavigate the city. After several minutes of wondering why this town sprawled so far to the west, I finally checked my maps and found myself 270 degrees around the circle. Sheepish, I backtracked and pressed on.

The clouds over rural northwestern IL that afternoon were as thick as their topsoil. I drove beneath their aegis up the old Stagecoach Road through smaller and smaller towns: Freeport, Eleroy, Lena, Warren. The pavement ended; I crunched gravel up and down the rolling hills, through the cornfields, and at last to the high point. 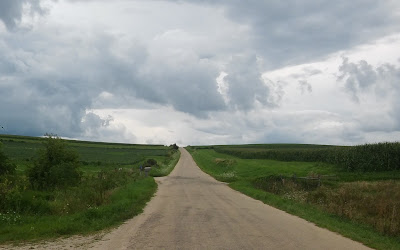 I pulled up outside Charles Mound at around 4:30 Central time. As expected, the place was one huge cornfield, dotted with the occasional hay strip, soybean field or farmhouse.


In absence of instructions, I parked at the street and walked up the driveway. 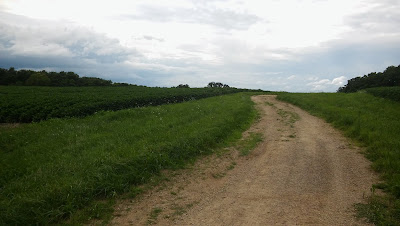 The way up was surprisingly hilly: nothing to write home about, but more than I’d expected from a Midwestern high point. I passed more cornfields, a soyfield with rebellious cornstalks poking up through the beans,

the official parking lot (complete with a “High Pointers Park Here And Don’t You Dare Drive Any Closer” sign), and a picturesque barn:

From there it wasn’t far to the “summit,” a mile from and perhaps 50-100 feet higher than the road. I took in the highpoint sign: 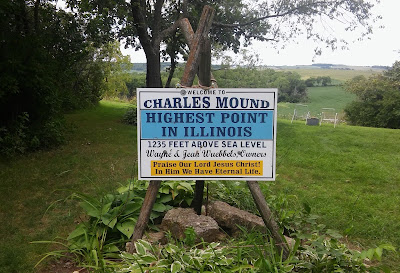 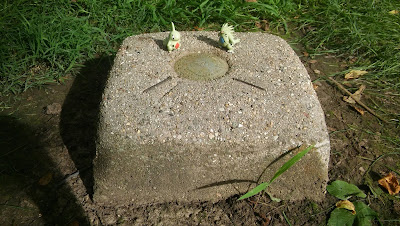 then wandered over to a view a bit further down the road. I’ll admit that it was past the “Highpointers Stop Here, Seriously, We Don’t Want Your Germs” sign, but there was a small crowd standing beside it, and people had also ignored the parking sign down by the barn, so I figured I wasn’t stepping on anyone’s toes. I’d just snap a quick picture, then head down. I figured wrong.

A man in the crowd stopped me as I came over. “Can I help you?” he asked.

“It is.” Not a yes. “I’m not in charge here, but I think you folks are supposed to stay behind the sign.”

“Oh.” It seems these weren’t fellow highpointers after all. Whatever. I turned around and left.

I have no idea how that guy was connected to the owners, if at all—a friend? relative? uppity Illinoisan trying to scare off the out-of-staters (my shirt marked me as a Virginian)?—so I can’t say how official that dismissal was. And bear in mind that Charles Mound is on private property; the owners are under no obligation to let anyone in to see it. But I will say that if one happens to own a point of geographic interest, one that a smattering of folks from around the country would like to visit, it’s rather harsh to restrict access to eight days out of the entire year, and it’s downright unfriendly to not let them take pictures from the top.