It was on that long drive south through the High Plains of Wyoming that I finally got the hang of passing across the yellow line. The trick to it is to drift a little over the line so you can see around whatever giant truck or RV is blocking your way. If there's oncoming traffic, you can zip right back into place, but if not (and in Wyoming, there's usually not), you can go for it.

From the Black Hills I followed US-18 through Lusk (whose gas station was abuzz with motorcycles leaving Sturgis), then continued south down US-85 through Lingle and Torrington. Along the way I passed miles and miles of empty rangeland, sunbaked buttes, blizzard gates, and tiny towns that stuck out like oases from the prairie. I noticed that one such town, Hawk Springs, listed its elevation on the town sign rather than its population... because the former was the higher number? At Cheyenne I returned at last to civilization. I got a motel room and some supper, scrubbed off the dust of the Black Hills, and slept straight through to the dawn.

The next morning I spent some time catching up on my online life (thankfully, there'd been no more attacks on my email account), then headed out around 11 am (still on Mountain time) towards the Nebraska high point. I-80 took me all the way to Pine Bluffs, a scenic little town along the WY-NE border. The Bluffs it's named for are a long row of pine-covered cliffs--a sort of Black Hills-lite--that drop from the Nebraska plains to the slightly-lower plains on the Wyoming side. I climbed the bluff south of town, followed its edge southward, and then veered east to cross the border. The gravel roads were lined with sunflowers--a theme of these Plains high points: 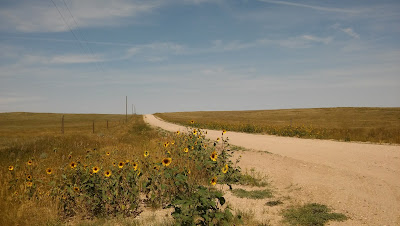 After a bit of backtracking,

I found the place at last: the Hi-Point Bison Ranch: 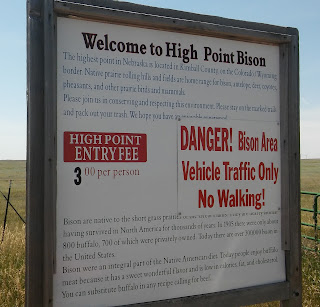 That's right--the high point is in the middle of a working bison ranch. Because of this, all highpointers are required to approach by vehicle. Not wishing to repeat Goat Incident with larger, more dangerous animals, I complied.

I stopped at the entrance to pay my fee, then bounced over my first cattle guard:

and into a pasture full of real-live bison!

The gentle giants kept their distance, but the real hazard of this high point soon revealed itself: the road--or, rather, the eroded pair of ruts that pretended to "road" status. The whole thing was horribly uneven, with plants growing up through the middle high enough to scrape against my car's undercarriage (and make a horrible noise as I drove over them). No permanent damage resulted, but it made for an anxious ten minutes each way. I wouldn't take a low-clearance vehicle up that road again.

The high point itself was minimal: a little obelisk: 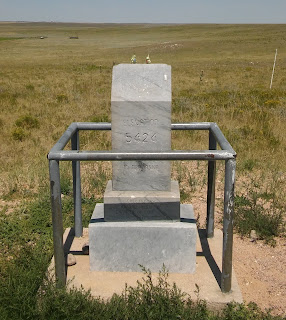 a Highpointers Club bench (as always), and the "summit" register. I wound up spending most of my time there skimming a copy of the Club's newsletter that someone had left behind, gathering info on the Rocky high points I'd soon attempt. In a cruel irony, the newsletter also mentioned that the road to Panorama was in desperate need of funds for repairs... you're telling me. I took my pictures, signed the register, and returned to the road. 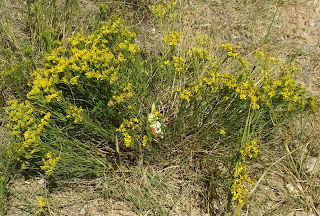