...But first, a quick spin around the Great Lakes. There are five of them, as I'm sure you recall from grade-school geography: 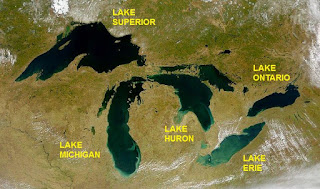 Formed by glacial activity at the close of the last ice age, these lakes cover 94,250 square miles of land and contain 21% of the world's surface freshwater by volume. This water flows first into storm-driven Lake Superior,

then sloshes back and forth between Lakes Huron and Michigan (since the two form a single body of water, hydrologically speaking), filters down through tiny Lake St. Clair into Lake Erie, the shallowest of the five,

then drops 325 feet as it follows the Niagara River over its famous falls and into Lake Ontario, from which it drains into the Gulf of St. Lawrence.

Quite the trip, wouldn't you say? For the first several days of this Midwestern leg I found myself following it in reverse--swimming upstream, if you will. Just as the Appalachians catch the storms of the Mid-Atlantic and the Gulf Stream warms the coast of Europe, the Great Lakes shape the climate and weather patterns of the Upper Midwest (and, in my humble opinion, form the most alluring feature of this otherwise flat and forested region). And though they comprise the low point of three states (Erie is Michigan's, Michigan Wisconsin's, and Superior Minnesota's), two high points also stand within their basin. 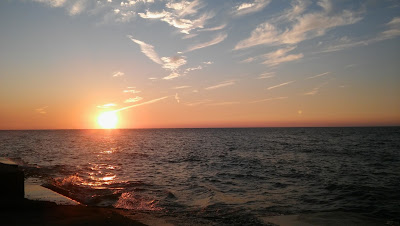