After spending most of the morning looking up directions for my new, Rocky-less route through the West, I once again bade goodbye to Nancy and departed Denver. The Kansas high point, my goal for the day, was only a few hours away, so I figured I had time to detour down I-25 and see a little more of the Front Range (from the plains, of course). I don't know why I felt the need to taunt myself with more views of those inaccessible peaks, other than that they were there, and I was there, and even after yesterday's near-asphyxiation I still hadn't entirely stopped wanting to climb them.

So I followed the highway south to Colorado Springs and pulled off at the Garden of the Gods, a famous park on the northwest side of the city. Its Wikipedia article, which I'd come across ages ago while looking into rock climbing, is full of glorious photographs of red stone outcroppings jutting up from an empty hillside--and when the Lars saw those, they insisted we stop by.

You might be wondering why a bunch of rocks in a mid-sized Colorado city wound up with such a grandiose name. The answer, I'm told, goes back to a dialogue between two surveyors who explored the area in 1859. The older one, perhaps a bit thirsty at the time, remarked to his companion that the area would be a "capital place for a beer garden," to which the awestruck young fellow replied, "Beer garden? Why, it is a fit place for the gods to assemble!" and thus it was called "Garden of the Gods." The land was purchased in 1879 by Charles Elliott Perkins, a railroad baron, who intended to build a summer home there but never quite got around to it. Upon his death, his children ceded the land to the city of Colorado Springs on the condition that it become a free public park, and public and free it has remained through the years... perhaps uncomfortably so.

Now, if you've learned anything about me from following this blog through 64 posts, you know I'm not objecting to the freeness of the place. So what went wrong with this ol' heavenly rockpile?

Well, when I reached the place, I turned right into the Garden itself on the naive assumption that I'd surely find some parking on a cloudy morning in the middle of the week. But as I wound up the one-way park road, I was gradually forced to confront the fact, lot by vulture-ridden lot, that there wasn't a single spot open in the entire park. Even the handicapped spots were taken. I had no choice but to circle back out and try the visitor center across the street.

It wasn't until I pulled into the center's parking lot (where I finally found a spot) that I realized the scope of the Garden's popularity. Judging by the license plates I spotted and the languages I overheard, tourists had come from all over the globe to jog, stroll, and climb their way through this divine table-setting. Heck, there was even a Segway tour group packing up as I arrived. This trend (minus the Segways) would continue through the rest of my trip; the Garden of the Gods was only the first of several staples of the American West Tourist Experience™®(sparkles) at which I wound up stopping. I ducked through the throngs and into the visitor center, which informed me in no uncertain terms that wandering off-trail was discouraged (understandably so, given the crowds) and attempting to climb any of the rocks without a permit and technical gear would result in immediate expulsion from the premises (...if you're caught). Good to know.

Then I crossed back under the street and entered the Garden itself: 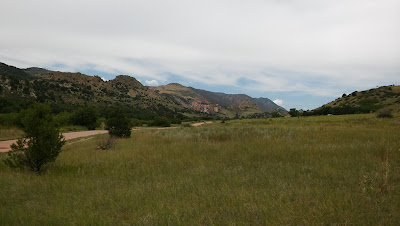 Even at the park's periphery, its paths were full of people: old and young, brisk walkers and dawdlers, families with strollers, dogs on leashes... you get the picture. No hope of solitude at all. I passed through a tunnel of greenery: 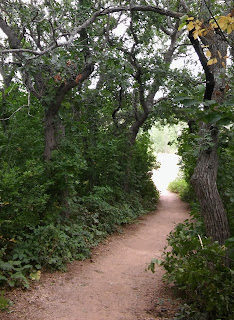 and found myself beneath the famous red behemoths:


They looked a bit silly, fenced off and caged in by concrete paths. I wandered towards the center of the park, where one of the rocks held a plaque commemorating Perkins' gift: 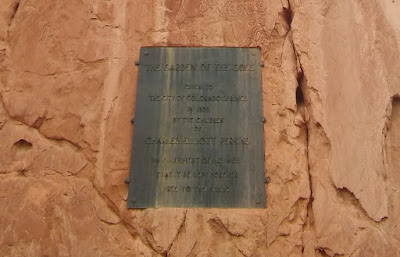 The Lars were quite impressed with the rocks, but all the crowds and regulations had ruined their appetite:

As for myself, I'd hoped to sneak in a bit of bouldering on the sly, but there was no chance of that with all those looky-loos on the ground. I suppose it's for the best, though, since even after spending most of the previous day over 7000', the elevation still left me breathless if I moved too quickly. I contented myself with watching a party of permitted climbers smear up the sandstone walls, then walked on.

Further into the park I came across a low ridge that we were allowed to climb onto:

which offered a nice view of a particularly spiky formation to the right:


and up towards Pike's Peak:

A lovely spot, but there were literally twenty other people jostling for position on that rock, so I took my pics, then headed for the exit...

...though I might have snuck off-trail on my way out to observe a certain ridge in greater detail.

Email ThisBlogThis!Share to TwitterShare to FacebookShare to Pinterest
Labels: CO, Colorado Springs, Garden of the Gods, lar, side trip, too crowded