I popped back over the state line to spend the night in Lamar, CO--the only town within a hundred miles large enough to host multiple motels--then woke with the sun and headed south down US-385 to the Oklahoma Panhandle. The low scrub of the plains did little to keep the sun from my eyes; the 18-wheelers I kept having to pass did much better, though with the side effect of checking my speed to the posted limit (sigh).

The Panhandle, by the way, has quite the interesting history. Originally part of the Republic of Texas, the strip was ceded to the federal government when Texas joined the U.S. as a slaveholding state, since that land was north of the 36°30' slave/free cutoff imposed by the Missouri Compromise. It spent the second half of the 19th century as an unorganized no-man's-land, serving as a hideout for outlaws and squatters. Towards the end of the century it campaigned to be recognized as its own Cimarron Territory, but was instead incorporated into the Oklahoma Territory in 1890.

I arrived around midmorning at Black Mesa State Park only to discover that the high point wasn't actually there:

but in Black Mesa Nature Preserve a few miles up the highway.

Oh well. At least I saw a roadrunner in the park. Those bouncy-tailed ground-cuckoos are my favorite bird of the Southwest. I hadn't realized they ranged east of the Rockies, but this dry, rocky habitat seemed right up their alley, more like the basins of New Mexico than the grasslands of the northern Plains.

Once I'd had my fun stalking birds, I backtracked out of the park and drove on to the preserve.

Not long after I'd left the highway, the mesa came into view:

After Nebraska and Kansas' plains-ripple high points, I hadn't expected much from Oklahoma, but clearly I'd been misled. This thing rose several hundred feet above the valley floor, stretching west to the horizon--and across the border into New Mexico and Colorado. I didn't know it at the time, but only the southeastern tip of the Mesa is actually in Oklahoma; most of the 28-mile-long landform lies in Colorado, where it peaks at 5705'. Both the black rocks at its rim and its squiggly, amoebic shape are due to its volcanic origins: the Mesa was formed 3-5 million years ago by an outflow of lava that filled a valley, then cooled and hardened into erosion-resistant basalt that has outlasted the walls that molded it.

I drove around the mesa's tip, bouncing over cattle guards and past a row of seemingly abandoned buildings:

to the preserve's entrance on the far side of the mesa:

There was only one other car at the trailhead, belonging to a pair of hikers who shortly passed me on their way down--natives, I assume, since they greeted me with an unironic "Howdy." If I'd had any sense, I would have started my hike as early as they had, but as I said, I was expecting another drive-by, so I'd taken my time showing up... and now here I was at high noon in mid-August preparing for an 8.4-mile round-trip through a shadeless desert.

So I threw on a loose white shirt (long-sleeved for the extra SPF), jeans (which I once again hoped would defend against both prickly flora and poison-fanged fauna), and boots, grabbed my water bottle and walking stick, and headed up.

The trail began with a westward meander, following an ATV track through the valley: 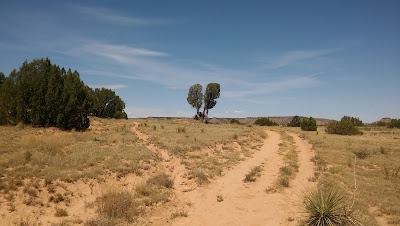 The grass, dotted with cacti:

was patrolled by legions of grasshoppers. A dozen sprang up at my every footstep, frantically jumping whichever way their insectile brains suggested: forwards, sidewards, upwards, and even, on occasion, backwards into my face--not the brightest little buggers. There must have been four or five different species spotted in various patterns of red, gold, brown, and black. The only shade came from juniper bushes along the trail. I flushed a few Northern Flickers from them: the western, Red-Shafted variant, I noticed, not the yellow-winged ones that lived back home. Vultures and ravens circled above, riding the mesa's updrafts.

The trail was labeled with little arrow-signs every half-mile:


and supplied with a bench every mile. It seemed a bit excessive to me, but, this being a nature preserve, the designers were probably catering more to the birdwatching crowd than to hardcore hikers. And I can't complain; the benches made good reminders to stop for a drink. 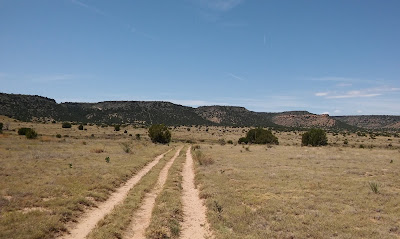 until the second mile mark, where the trail took a 90-degree turn towards the mesa and began to rise. The incline gradually increased as it headed into a valley, then turned to switchback up the mesa walls:

From here I could see down into the valley: 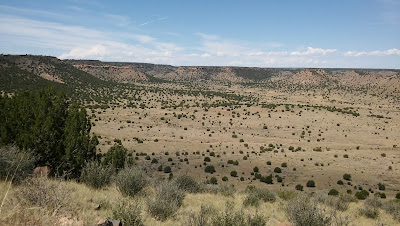 and back the way I'd come:

A few hundred meters further, and I'd summited the mesa. Its top was just as flat and arid as its base:

I followed the trail (now a single rut in the grass marked by rocky cairns): 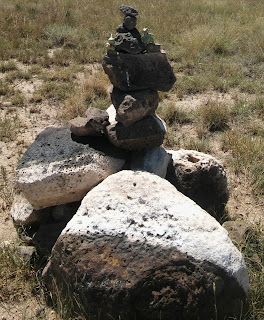 for another flat mile to the high point: 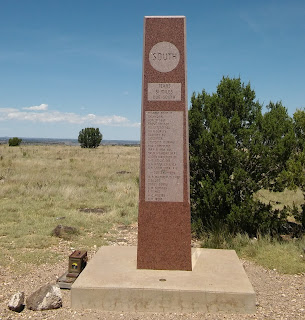 Oklahoma's summit was marked by a four-sided obelisk, each side representing one of the four states adjoining Cimarron County (more than any other county in the U.S.). To the north, 4.7 miles distant, was Colorado; the southwest corner of Kansas met it 53 miles to the east-northeast; the Texas border lay 31 miles to the south; and New Mexico awaited 1299 feet to the west. I signed the summit register, then rested on the concrete platform as LarLar tried his very first taste of basalt.

While sitting there, I noticed that the trail continued on to the edge of the mesa. I wasn't all that tired, nor all that burnt--yet--and my water bottle was still half-full, so why not? And so I followed it over, arriving a third of a mile later at the mesa's rocky conclusion: 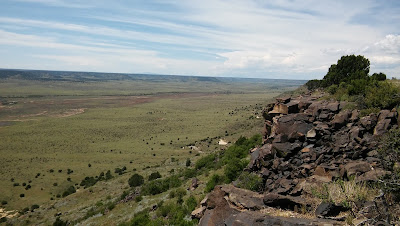 A furious wind swept up the sides, filling my ears. I planted my feet, faced it, and gazed out over the empty valley: 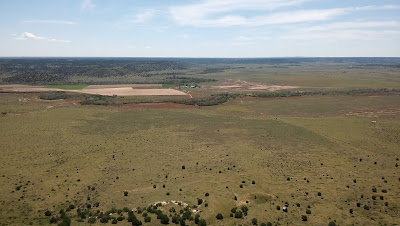 This, I thought, is the life.

I descended without incident, save for a few more grasshoppers to the face--kind of gross, considering that they appeared to eat dung. The car was an oven upon my return, of course. I left the doors open to air it out as I gulped down cool water from the backup-bottle I'd hidden in the footwell of the passenger seat. Left on the seat, water will heat; out of the sun, water stays fun--there's your camping tip for the day.

On, then, to New Mexico, to luxuriate in my sunburnt skin in all the comforts of a cheap motel in Tucumcari. Down state routes studded with cattle guards I'd drive; through plains and mesalands I'd pass, over red soil and yellow grass, by dark-green juniper that scented the dry air, into the Southwest of my memories. In places, the heat-haze over the road mirrored the sky so well that it seemed my car would lift off and drive straight into the blue.
<--prev | next-->
Posted by Stoat at 7:11 PM