I headed out early the next morning and drove north across town, parallel to the ridgeline of the Sandia Mountains. The trailhead of La Luz was on the far northwest corner of Albuquerque, sharing an access road with a Forest Service picnic site. I hopped out of the car, changed into my boots, and headed up.

The trail began with a gentle climb up and over the foothills. It contoured south through the scrub in the shade of the mountains: 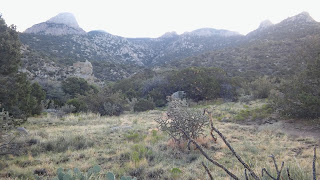 then, as the slope increased, started to switchback.
About a mile in I came across a second sign announcing the start of the La Luz trail:

I shrugged it off and kept climbing. Before long I could see across the valley to the hills to the north: 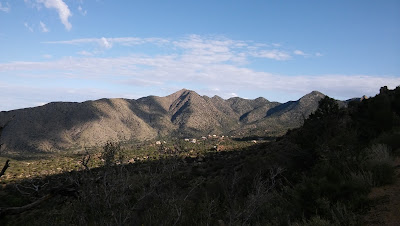 The sun came slowly over the Sandias, marking their contours in shadow. The trail passed in and out of its light, then settled there to stay. At the crest of a spur I looked back towards the city:

The first cliffs of the Sandias appeared around the next turn: 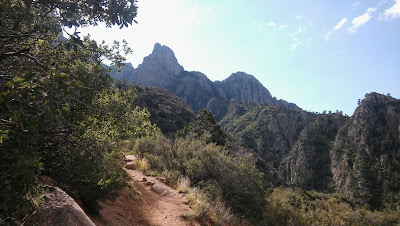 By this point I'd gained 1000, perhaps 1500 feet from my starting point in the foothills. The air still felt the same, but I'd passed into a very different climate zone, as you can see:

Cool, moist air gathers in these mid-height valleys, dropping enough precipitation to make them fertile as rainforests compared to the desert below:

The trail continued up and around another dry spur, then plunged deeper into the mountains. I followed it between two pink granite walls, then looked back to see they'd shut away the city:

As I climbed up through the montane forest, I noticed a sight for sore eyes...

And those little oaks were just the beginning. The broadleafed trees got taller and thicker as I ascended, and by the summit the forest was almost evenly split between them and the pines.

I paused for a rest at the turn of a switchback: 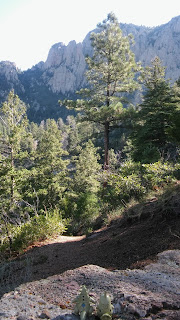 then continued up towards the Sandia spires:

Although they look impressive from below, they're not particularly popular with climbers due to the low quality of the rock. After all, no one wants their footholds to crumble out from under them halfway up a hundred-foot wall. A few routes have been documented by local climbers, but they all begin off-trail, deep in the brush.

Further on, I came to an officially-designated "scenic view"--as if those words didn't describe the whole trail:

I scrambled up onto the boulder-knob for a look... and what do you know, there was the city again. Now I could see beyond the Rio Grande into the desert west of town.

The Lars' attention, though, was fixed in the other direction:

The trail passed beneath them, giving me an up-close view of the Sandia granite: 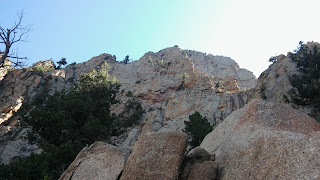 It skirted around that particular cliff, then headed up a narrow valley dominated by several talus fields (or "boulderslides," in the common parlance). Sweet, I thought when I saw them--are we going to do some scrambling? 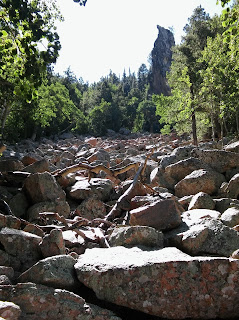 But as La Luz led me up, across the first boulderslide, into the woods a bit, then back around to re-cross that same slide, I realized it was taking me up a perfectly good scramble on switchbacks. Really? Taking matters into my own hands, I sprang off the trail and clambered up to the next trail-crossing... then immediately slumped over, gasping for breath. Fine, Luzie--switchbacks it is.

And so my progress slowed, due both to the thin air (I must have been at least 9000' high) and the trail's circuitous route. I inched up the valley, marking my progress by the spurs on its northern wall:

Ahead loomed the white-and-green-striped "rind" of the Sandias:

which meant I only had another thousand feet to go. Joy.

By this point I was feeling the elevation pretty bad. It was nothing like the chest-tightness I'd experienced in Colorado, though, just a heaviness in my limbs and a slowed recovery from exertion that reminded me far more of the month back in high school when I'd tried to train for cross-country while anemic. It wasn't easy to make it through a practice when the warm-up lap left me as winded as a four-mile run used to; just so, it's hard to climb a mountain when you need a breather at the end of each switchback. But if there's one thing we mountaineers are known for, it's persistence:

The Crest Spur Trail, much like La Luz, was gentle but switchbacky. It led me along the steep, forested sides of the Rind:

and up through the white cliffs. At one point it even climbed the side of one by stairs. I considered skipping those (there was a scalable-looking series of ledges a few dozen feet back), but, remembering my experience in the boulder field, I stuck to the trail.

A short way from the summit, the trail passed by a clear spot along the edge of the cliff. I ventured out to take a look...

Looking south along the ridge, I could see South Sandia Peak (the range's other major summit), backed up by the distant Manzano Mountains: 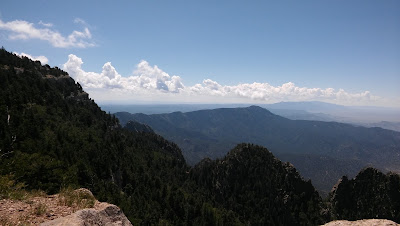 And, of course, looking down I could see all the switchbacks I'd so painstakingly shambled up to get here.

This spot was amazing, so surely the summit must be even better... right? Right?

Like Cheaha Mountain and Mt. Washington back east, the official summit was given over to car-tourists (who'd driven up the much gentler eastern side of the range). A huge restaurant/gift stop  dominated the apex:

and the rest was one huge parking lot:

The view from the "official" overlook (featuring a paved path, nature signs, and a fence so nobody fell off) wasn't even as good the one just down the trail. At least I got to see over the far side of the mountains: 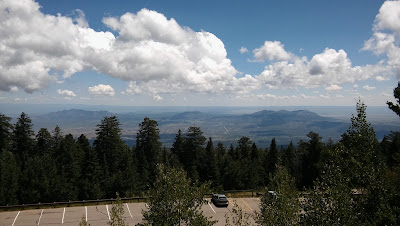 So there you have it. If Katahdin is the only "western" peak east of the Mississippi, Sandia Crest is one of the few "eastern" peaks west of it.

After surveying this mess of civilization, I settled down to snack on a concrete step. Halfway through I was joined by a fellow hiker, an older woman I'd passed on my way up, who sat down beside me and pulled out her own lunch. We chatted for a bit. I forget what-all was said, but the topic eventually came around to thunderstorms. Today? With those clear skies? Unlikely, I thought, but you never can tell with mountain weather. I gave the sky another look--nothing but harmless cumuli as far as I could see--and predicted we'd have another hour or two of clear weather, at least.

With that, I headed down the way I'd come:

For some reason, the elevation didn't bother me at all on the way down. I don't know if my body had flipped some sort of emergency acclimation switch, or if stepping down a six-degree incline is just that much easier than stepping up it, or what, but I hiked straight down that mountain without a single break.

My descent went perfectly until, an hour and a half down the mountain, I spotted some scary-looking weather coming up towards the hills:

I quickened my steps, hoping to get down from the heights before the worst of it hit, but that storm was moving fast. A half-hour later I got a call from my hosts checking to see if I was all right. Their office in downtown Albuquerque was getting poured on.

But Pamola's favor was with me that day--apparently we'd come to an understanding about that whole "cereal" thing--a wind swept in and pushed the storm to my south before it hit the range. I only caught a few drops. An hour later, everything was back to blue and sunny (this being a desert, after all):

And so I stomped down through the foothills, thinking I was home free: 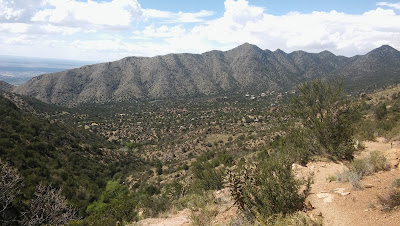 but La Luz had one more surprise in store for me:

Yep, that's a rattlesnake--the first I'd ever seen in the wild. Upon spotting him--several feet out, thankfully--I froze. He looked at me. I looked at him. He didn't move.

"Hey," I said, in my best snake-shooing voice, "I'm coming through."

Now, I could have sic'ed the Lars on him--their Rock-type moves would kick his scrawny Poison-type behind in no time--but that didn't quite fit the ethics of Leave No Trace (Pokemon battle-sites are the #2 cause of trailside erosion, you know, just after switchback-cutting), so I had no choice but to wait... and wait... and wait... until he finally slithered off into the bushes, then leap over the spot where he'd been and run for the trailhead.

Seven and a half hours after I started, I arrived back at my car. Not bad for a sixteen-mile round trip, I'd say. With all due ceremony--none--I stripped off my hiking boots, chugged the last of my water, and drove back to town.