In August, the Lost River range is defined, or rather, undefined, by haze. Dust hangs in the distance, obscuring the elegant curves of the foothills and reducing the peaks to no more than cloud-shadows hovering over the horizon. As one approaches, they solidify one by one into gray granite pyramids sprinkled with shreds of snow, each summit higher than the last.

This, of course, makes spotting the high point rather difficult. As I drove north on US-93 that afternoon, a new candidate emerged for every mile I progressed--but no sooner had I voiced aloud "Is that one Borah?" than a higher peak popped into view just beyond. Finally, a dozen miles past Mackay, a clear victor emerged. I followed the highway's curve around its magnificently smooth slope, then turned up a gravel road towards the Borah Campground... and caught my first glimpse of the real Borah Peak behind it.

That road took me over a brook (one of many "lost rivers" in this valley with no aboveground outlet: they gather, flow a ways, then vanish into the water table): 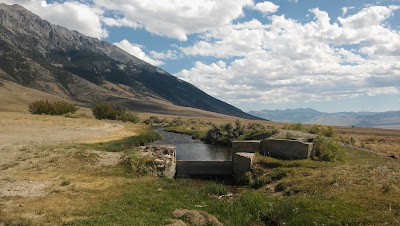 around a hairpin turn, and up to the campground itself: 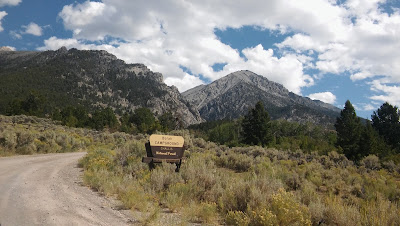 I'd expected something tranquil and empty-ish, like the land I'd passed through to get here... but I was off by a mile.

The place--around midafternoon on perhaps the last Saturday of the snow-free season--was a zoo. The day-use lot overflowed with cars, trucks, and RVs parked at all sorts of funny angles over the rough terrain. Though there were only five official campsites (all occupied), at least twice as many tent-clusters squatted around its rim. Packs of people loitered throughout, sitting, chatting, and casting an eye every so often at the trailhead. At first I had no idea what they were doing--this place lacked several features of the ideal campsite, particularly shade and water access--but then I realized they must be waiting for their companions to descend. Had all these people attempted Borah Peak? Had they all turned back before the summit?

I pulled in near the trailhead, took a quick look around:

then retreated to my car to wait for the place to clear out.

As I sat there, several groups came down the mountain--either successful climbers who'd started at dawn or attempters who'd made a later start. To my surprise, they weren't just your stereotypical fit twentysomething mountaineers: the climbers ranged from young teens with their families to older folks leaning on trekking poles. Perhaps this climb wasn't quite as impossible as I'd thought.

An hour later, enough of the crowd had dispersed that I found a better parking space away from the commotion: 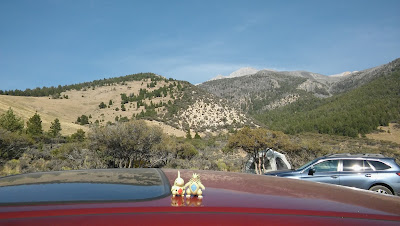 and, beside it, an unofficial campsite beneath some low shade trees. I pitched my tent there, paid the camping fee anyway as a show of goodwill (in case some avenging ranger showed up in the night to straighten the place out), and settled in. The process was somewhat complicated by the local swarm of wasps, who kept trying to get all up in my tent, my gear, and especially my food. Despite the sweltering heat I wound up dining in my car, then hunkered down in my tent until sundown. 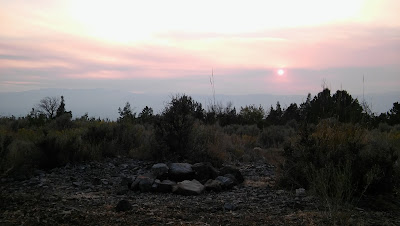 After that hot dry day, the evening was quite agreeably cool. The haze cleared a little, though I could still taste it on my tongue. As the evening dimmed, I spotted tiny points of light on the distant hills: campfires burning across the valley.

So then, I thought as I lay there in the dark, here I am at Borah Peak, the mountain I can't climb... or could I? I'd been fine at over 10,000' in the Sandias, but that was on an easy Class 1 trail; the scramble to Borah's summit wouldn't be quite so forgiving. I shouldn't push it. Or should I? All those other hikers had made it up and back just fine... but those folks probably hadn't spent the past 23 years living at sea level. I felt fine here at the base, though--all that wasp-dodging hadn't left me the least bit winded. But how would I feel at 12,000'? Aagh, there was no way to know.

What is one to do with an unclimbable mountain? I wondered again as I dropped off to sleep...
<--prev | next-->
Posted by Stoat at 3:42 PM