(Just so we're clear, Borah Peak was my last high point on this trip. If that's all that interests you, you can stop reading now. However, if you'd care to see my journey through to its conclusion, I've got two more posts for you...)

With mighty effort I roused myself from the abyss of dreams and returned (up a Class 3 chute) to reality the next morning. Here I lay in my motel room, stretched horizontal beneath the sheets, still, sheltered, and safe... and holy cow it was 10:20 am. I had forty minutes to eat, shower, and skedaddle before they tacked an extra night's stay onto my bill.

Thirty-nine and a half minutes later, I emerged blinking into the Idaho sun, toting all my possessions in a profusion of bags. I shoved the stuff haphazardly into the front-passenger seat and set off, heading west down I-84. The Oregon border was less than an hour away. I crossed the Snake River on the interstate, then pulled off at the oddly-named Ontario (aspirational...?) for gas.

Remember, back during my brief sojourn through New Jersey, when I had my gas pumped by an attendant? Only two states in the Union have enshrined that antiquated profession into law, and, as I discovered that day, Oregon is the other.

I had popped my tank lid and was just about to step out when a woman came up from behind and asked me for my debit card. For what... oh. So I sat, tapping my fingers against the wheel, as she set the pump to fill, disappeared who-knows-where for half an Infected Mushroom song, then finally wandered back to finish me up. Needless to say, she didn't clean my windshield. The station was busy, so I don't blame her; I blame the silly law that kept me from doing her job for myself. Once my card was finally returned and my tank shut, I pulled out and drove west down US-20 into eastern Oregon.

Just as I’d had no prior conception of what Idaho looked like, I didn’t know what to expect from Oregon either. At first it was more of the same: dry, yellowed plains that eventually gave way to grassy, iron-red mountains of about the same scale as the Appalachians: 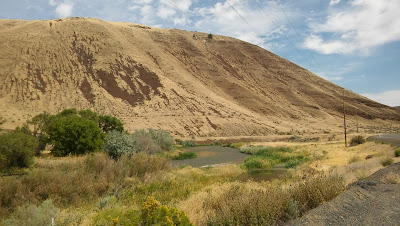 The road followed the Malheur River upstream through the hills to Juntura, then turned east into the high desert country, where it ran straight and flat through near-empty countryside. East of the Cascades, it appeared, Oregon was a whole lot of nothing. All its wildlife refuges, national forests, and BLM land were only abstractions and barbed-wire fences atop a vast, horizon-spanning sagebrush sea. There was a brief urban interlude at Burns, the largest community I’d see between Boise and I-5 (population: 2800), but within minutes I was back on the range.

At Riley I turned southwest (past yet another "Next Services Two Zillion Miles" sign) onto US-395, an even straighter road traversing even emptier lands. I passed another single-building town (Population: 3), and then, well:

All the while, driving coastward, I waited for the trees to kick in again. Where were the famous firs of Cascadia? Surely they'd begin before the town of Christmas Valley:

That tiny town was not only Christmas-tree-less, but gas-station-less--the old Shell at the crossroads was boarded up. How, I wondered, did its inhabitants live without one? I'd crossed over fifty miles of sagebrush desert to get here, and the next scrap of civilization was just as far to the west. How much of each tankful did they spend driving the fuel home, and how much traveling to pick up the next? And what if--Pamola forbid--they got careless and ran out? I couldn't live that way--at least, not without a massive spare tank in my trunk.
Speaking of tanks, mine was getting rather low...

I continued on to Silver Lake:

where I turned due west once more and ascended into pine-covered hills. At their base lay the Klamath Marsh, a flat, waterlogged valley split evenly between a wildlife refuge and pasturelands. From its flats I caught my first glimpse of the distinctively volcanic Cascades:

Beautiful land, it was--but still no sign of a gas station, and I was getting uncomfortably close to empty. The next town I passed, Chiloquin, was no more help than Christmas Valley; the fading sign above their abandoned station showed a price in the mid-$1s. By the time I finally found a pump--at a kitschy casino/travel stop off US-97--my fuel light was glaring yellow and I was about ready to punch the long-ago governor who'd signed that gas-attendant law. This scarcity is what comes of mandating unnecessary labor, I fumed. Profits tank! Businesses close! Needs are left unmet! I pulled right past the station's attendant to the single self-service pump just to spite that stupid law. (Admission: after seven hours behind the wheel, I might have been a little bit hangry.)

Fortunately, it wasn't far from there (as Western distances go) to the entrance of Crater Lake National Park. I arrived an hour later and found myself in a new world, the opposite of the eastern scrublands:

The park-road took me up through a thick forest of impossibly straight and incredibly tall firs to the entrance booth... which, of course, was closed for the night. And, what's more, they were all out of self-service envelopes with which to pay the entrance fee. The road, however, was wide open...

A bit further on, I stopped at the visitor center to get my bearings. It was also closed, but the free park newsletter/map I took from a stand outside answered my questions just fine. All the interesting stuff (in particular, the cheaper, reservation-free campsite) seemed to be on the east side of the park, so I turned onto East Rim Dr. and drove up towards the crater's edge.

That road turned out to be not only a white-knuckle cliff-gripping mountain drive (the likes of which I hadn't seen since Colorado), but also rutted and cracked and crumbling away at the edges. As I read in the newsletter later that night, heavy traffic and the shifting of the park's loose volcanic soils had left the road in dire need of repairs (you don't say...), but the park's maintenance crews had prioritized the more-popular West Rim Dr., which was under construction at the time. (Also closed for mainenance was the single trail down into the crater, thereby cutting access to both the lake and its islands. Come back in 2017 to see the results! the newsletter cheerily concluded).

I paused at an overlook near the top of the ridge:

then continued up and over an arm of the crater and down into a deep valley.

At its base, I turned onto the spur road leading to the campground. I'd read on the park's website that it usually filled by midafternoon, but today was a Monday and the local schools were back in session (so I thought), so I'd planned on their being a spot left for me when I cruised in around 5 pm. But 5 ended up being more like 7, and the schools actually had one week of vacation left, and come on, this is a national park we're talking about, so of course they were all taken--though, in my defense, I wasn't the only car to pull out disappointed that evening.

At that point, given how deep I'd driven into the park, I was pretty much stuck there--not to mention starving--so I pulled into a nearby trailhead and cobbled together a much-belated dinner. By the time I was done, night had fallen. I weighed my options: obey park rules and depart (via Rim Rd. in the dark) or risk a midnight eviction for parking overnight (and only possibly have to drive Rim Rd. in the dark). The choice seemed clear--particularly since I very much doubted they patrolled the park at night. As long as I stayed quiet and out of the way, who'd even know I was there?

And so I drove to the far end of that spur road, pulled aside, rearranged the boxes in the backseat, and once more slept atop them. Not the most comfortable bed, but I figured it was better than trampling down vegetation for an impromptu campsite--"leave no trace" and all.
<--prev | next-->
Posted by Stoat at 2:39 AM

Email ThisBlogThis!Share to TwitterShare to FacebookShare to Pinterest
Labels: deserts, government intrusions, lar, OR, side trip