Whereas in northern New Mexico half the population looked Hispanic, here in El Paso half the population actually conducts business in Spanish. The girl at the front desk was flawlessly bilingual—she spoke perfect Spanish to the guest before me and perfect English to me. I understood snatches here and there: the guy calling his buddy an idiot, the mom yelling at her kids to stop running in the halls, but for the most part I was shut out of sus conversaciones. As a chronic eavesdropper, I suppose that’s my just deserts.

I woke up late that morning, as though my body was in on my mind's conspiracy to postpone decision-making. With Guadalupe climbed, I was now past the planned portion of my journey, but on the opposite end of the country from its destination. All the remaining high points were over 10,000 feet high and thus unreachable, but where else was I to stop on my way north to Seattle? The most direct route was 1700 miles long, 25 hours of driving--I'd need to split that over at least three days.

I glanced over at the clock: there was an hour left until I had to leave. An hour to figure out where I was leaving for. I turned on my laptop and pulled up the maps.

Back home, I'd contacted some friends in Albuquerque about stopping by. Skipping Elbert and Wheeler had put me a few days ahead of schedule, but they could probably still have me with a day's notice. The ABQ was half a day's drive north of here on I-25, which fit perfectly into the half-day I'd have left once I got going. I could camp for the night in the Sandia Mountains east of town, then drive down and visit the next day. After that... I'd see.

And thus the plan was made. I showered, packed up (just in time), and drove off, heading back to the Land of Enchantment.

Just past Las Cruces, I hit a roadblock diverting all the cars on the interstate into a Border Patrol station beside the road. I followed them in with some trepidation, wondering what they'd ask of me. My driver's license was within reach, but all my other forms of ID were buried I-don’t-even-know-where in the boxes filling my backseat. When my time came, though, the agent only looked in my car, asked if anyone else was in there (no, I replied, conveniently forgetting to mention my extralegally-imported Pokemon buddies), and waved me on. As I continued up the road, I wondered if that checkpoint was business as usual for this stretch of highway--or if they'd set it up in search of something specific. Someone?

From there, I-25 was two fast empty lanes all the way north to Albuquerque, following the Rio Grande through central New Mexico’s range-lined basins. Until now I hadn’t known quite how many  ranges there were; a new one appeared along each side of the valley every fifty miles or so. All was arid in between, a dusty desert of sagebrush and rocks. I passed signs for a town called Radium Springs, some touristed-up relic of the nuclear age--perhaps not the best place to visit, since someday I intend to bear children with exactly two eyes and ten fingers. I stopped instead at Truth or Consequences for gas--though I was made to face neither:

and again, another hour up the road, at a rest stop beside the Rio Salado Sand Dunes:

At last, around mid-afternoon, I reached Albuquerque. Though small compared to any city back East, it still felt sprawly after the tiny towns I’d grown used to. I drove straight into town, switched interstates at its center, and headed up I-40 to the Sandias. At Tijeras I pulled off (onto the old Route 66) to figure out where I'd be camping. A quick Google search revealed that there were no established campgrounds in the Sandia section of Cibola National Forest--a lost opportunity, I'd say, with 600,000 potential campers living just next door. That narrowed my options to an RV park with mixed reviews or the backcountry. I took the latter, figuring it would be easy enough to find a flat, clear patch of ground to camp on in the foothills as long as I could find somewhere to leave my car.

But the second one I tried, further east at Canyon Estates, did. I wandered up the trail and picked out a spot, then returned to my car to eat and get my gear together. But the skies grew darker while I supped, and by dessert it was raining. No matter, I thought, it's just a quick summer storm. It'll blow through before sunset.

That "quick summer storm," of course, turned into an hours-long deluge that lingered well into the night. Carbound, I had no choice but to shift around my boxes and make a nest for myself in the backseat. Oh well, I thought as I waited for sleep. At least I hadn't set up the tent yet.

I woke with the sun the next morning--hard not to, when you’re sleeping in a car--and wandered up the trail again to find a nice spot to sit and catch up on my notes. Here on the windward side of the Sandias, the forests were lush and thick, a world apart from the scrubby foothills on the dry side:

Even so, the loose sandy soil had already drunk up the evening's rain, leaving no sign it'd ever fallen. This early in the morning, my only company on the trail was a couple of old fellows jogging with their dogs.

A half-mile up the trail I passed a small waterfall called Travertine Falls, named for the white stone that formed a cave beneath it:

Even with all that rain, the falls themselves were barely a trickle:

It must have taken them a while to deposit all that stone. I continued up the trail to a junction marked by a spiral of stones with a cairn in the center--a very New Mexico thing to find in the woods: unique, artsy, and vaguely mystical: 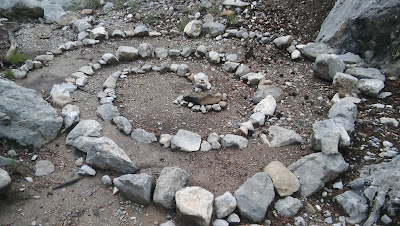 This spot would do just fine. I settled down on a nearby boulder and pulled out my notebook.

But just as I'd set pen to paper, I heard a low rumbling noise behind me like some large animal breathing. Oh no. I knew I should have made more noise coming up--what with the trees, caves, and ample undergrowth, this place is ideal habitat for black bears:

I stood, then slowly turned around to face my aggressor... but there were only empty woods behind me. Confused, I turned back to my notes--and there it was again. I looked up just in time to see a tiny shape buzz past my head. It hovered above the clearing for a moment, then darted away, its copper wings glinting in the sun. Bears, hah! I'd been off by a few orders of magnitude in terms of mass--it was only a hummingbird. The little fellows buzzed around the clearing as I wrote, chirping out battle cries and dive-bombing each other--they're quite territorial, you know.

When I was all caught up, I returned to my car and drove back downhill to Albuquerque proper. This being a Monday, my hosts were busy at work, but they took me out to lunch on their break, then let me into their house so I could get situated. I spent the afternoon playing with their two German shepherds (lovely dogs, in appearance and personality), dined with them again in the evening, and retired early with a plan for the next day.

While discussing my travels at the office, one of their employees had mentioned a trail called La Luz that climbed from the Sandia foothills to the range's highest point, 10,678-foot Sandia Crest. It was a long trail--eight miles and 4300 vertical feet to the summit--but nontechnical enough for trail runners to race up it. I'd wanted to climb the steep west face of the Sandias ever since I first saw them as a kid, and here I was in mountain-climbing shape with nothing better to do. And so I figured I might as well try that trail, despite the elevation, and see how high my lungs would let me go.
<--prev | next-->
Posted by Stoat at 10:30 PM