I spent the first half of the next day bouldering in the Sandia foothills:

and the second half recovering from my injuries (I didn't fall off a problem, I'll have you know--I tripped over a rock on the ground). That pretty much exhausted my list of things to do in the Sandias. I could have stayed longer--my hosts were glad to have me, and those two German Shepherds wanted me to move in for good--but the open road was calling me... and if, for some reason, I changed my mind about climbing those other high points (perhaps because I'd made it up and down from 10,678' without incident?) I'd have to do it soon. August was nearly up, and the alpine winter sets in quick.

So the next morning I departed Albuquerque (with a chunk of Sandia granite squirreled away in my luggage and a strange urge to rewatch Breaking Bad) and headed northwest up US-550. I drove through reservation land all morning, painted deserts dotted with the occasional small town or casino. At Shiprock I turned north and continued into Colorado. Here on the far side of the Rockies, the land was high, dry, and gently rolling, save for a few lonely ranges jutting into the skyline. Most notable of the bunch was Sleeping Ute Mountain, which lingered in my sights for several miles. The local Ute tribe likens its shape to a gigantic warrior resting from his battles against evil--a sort of western Mt. Mansfield.

Around midafternoon I crossed into Utah. I'd held off on filling my gas tank in New Mexico, hoping it'd be cheaper across the state line, but instead, to no one's surprise but mine, the price shot up 20 cents a gallon. Utah is pretty remote, you know; it's hard to ship fuel there. The higher prices held all the way through Idaho and eastern Oregon until I crossed the Cascades, where they jumped an additional ten cents for no apparent reason. Anyway, I filled up reluctantly in Monticello, then turned north onto US-191 and headed for the day's destination: Arches National Park.


Home to over 2000 natural arches weathered from the red Entrada Sandstone, Arches is the pride of Utah. The iconic Delicate Arch (the thing most of you see when you picture a rock-arch in your head) is featured on the state's license plates and almost wound up on its state quarter. Millions visit Arches each year to experience its surreal high-desert landscapes under a blazing sun...

...but on that particular August afternoon, a massive rainstorm filled the horizon ahead. I flipped on my lights and readied my wipers, hoping my fellow drivers had more experience driving through rain than their state's climate would suggest. The storm hit like a power washer, dropping the hardest rain I'd driven through since Minnesota. But it didn't last long; by the time I reached the Moab Valley, the worst had blown through, leaving only a lingering cloud cover.

Like most National Park gateway towns, Moab was touristy through and through, its main strip full of hotels and restaurants. The park entrance was just up the valley from the town. I turned in rather mindlessly, intent on finding a parking spot and a restroom, and was halfway to the gatehouse when I saw the entrance fee was $25. Way more than I'd expected, but with ten cars already lined up behind me I couldn't turn around. And so I rolled up to the gate... where the ranger handed me a map and waved me right in. Turns out it was a Fee-Free Day in honor of the National Park Service's 100th anniversary--way to dodge a bullet.

At the visitor center I learned that the hiking trails through the park were few, short, and scattered, but that most of its iconic sights were within a short walk of the road. This suited me just fine: my elbows and knees were still recovering from that bouldering incident, plus there was only an hour or so of daylight left. So I joined the caravan of tourist-cars heading into the park. The road wound up the valley wall to a ridge: 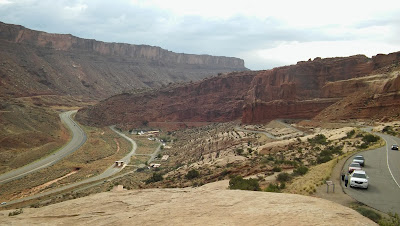 that showcased the sandstone stripes of the Moab Fault: 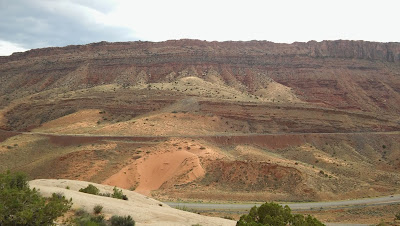 I drove on past a massive red sandstone formation: 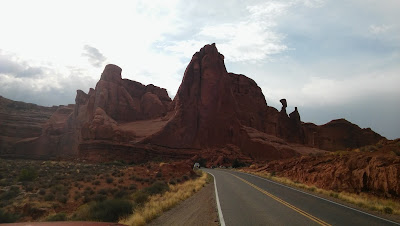 and caught a glimpse of the La Sal Mountains to the east:

Further down the road was the famous Balancing Rock, which LarLar found quite... erm...

Oh well. If anyone asks where the Rock went, I'll blame it on the toddlers in the minivan ahead of my car.

I continued down into another valley: 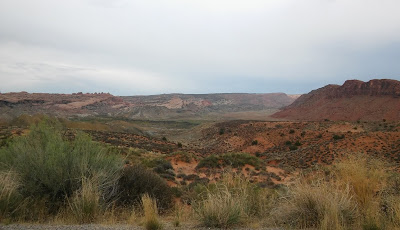 then pulled into the trailhead for Delicate Arch. Despite the rains earlier, its lot was nearly full--once you've driven all the way out to a place as remote as Moab, you can't exactly turn around and come back some sunnier day, particularly if you've crossed an ocean to get there. I shared that trail with quite the cosmopolitan selection of hikers: Brits, Chinese, Koreans, a few dudes speaking something Slavic, and a disproportionate number of Germans. (When I mentioned this to my German friend, he explained that a popular German author around the turn of the last century had set several of his adventure stories in the Old West, and that the fascination lingered among his countrymen).

The 1.5-mile trail began as a flat gravel path. It passed by a historic homestead:

and over a creek. On the far side I was greeted by a flock of wild turkeys crossing the trail. The little fellows weren't shy at all:

I guess they're used to the crowds. The trail continued through the valley:

then up a quarter-mile long, extremely low-angled slab of slickrock (yes, that's what they call it in the park, and it is pretty darn slippery underfoot): 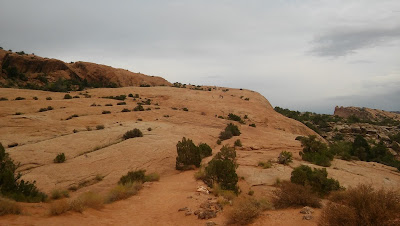 The park brochure had warned of "expooOOooOosure" on this trail, but this couldn't be what they'd meant--sure, you'd slide quite a ways if you fell, but who would fall? 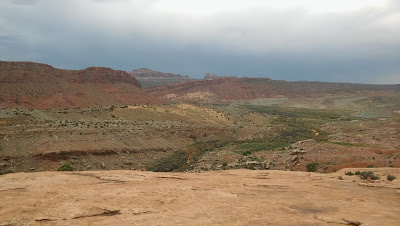 My multinational cohort and I summited the slab without incident, then continued on through swirls of rock and sand, following the footprints of our predecessors. We wound up on another large sandstone chunk, featuring drippy slickrock mounds: 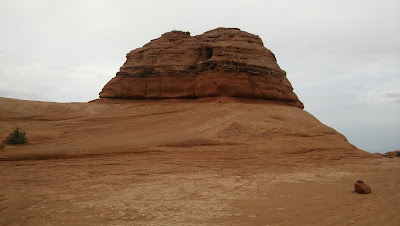 At the far side of that rock lurked the dreaded "expooOOooOosure": a (clearly artificial) four-foot-wide ledge!

I miiight have tap-danced across it, just for fun.

Delicate Arch was right around the bend:

As you can see, the whole rock on which the Arch perches was full of tourists. Some sat along the edge, content to view it from a distance, some ventured across the toilet-bowl-shaped slope for a closer look, and some even climbed the slickrock pillars off to the side. The whole thing tilted smoothly into a huge pit at the center. In the spirit of the Old West, let's call it the Devil's Toilet Bowl:

As you know if you've ever climbed with me, smooth slopes are my kryptonite. I don't care how low the angle or how grippy the rock--if there's no visible barrier to stop my slide into the abyss, I'm going to get acrophobic. But in the interest of getting the full Arches experience, I forced myself to follow the other tourists across the (mostly) flat arc to the foot of the Arch.

Along the way, one German woman's purse came open, scattering bills all over the place. She paused for a moment, then--I kid you not--darted straight towards the center of the Toilet Bowl to grab them. Somehow she managed not to fall in--she retrieved the bills, then her partner pulled her back up--but the whole thing gave me the shakes. It's not worth it, I thought, staring down the hundred-foot hole. Not even for a fifty.

I continued on to the Arch-end of the Bowl, took a few pics of the valley beyond, 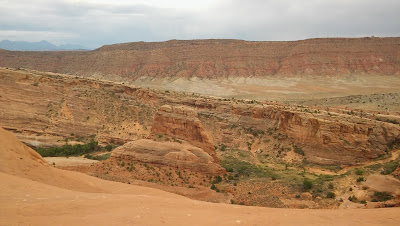 then scurried back across as fast as I dared to go.

By the time I made it back to my car, the sun was near setting. I drove out of the park with my lights on, grateful that the roads had dried so quickly after that afternoon storm, and turned up the Colorado River in search of a campsite.
<--prev | next-->
Posted by Stoat at 7:57 PM