I woke the next morning just as the sun rose over the walls of the Colorado River canyon: 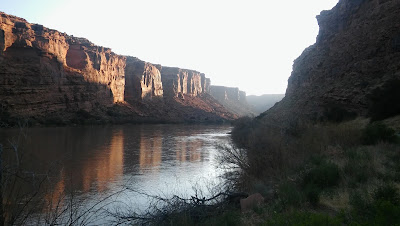 After a quick breakfast on a flat-topped boulder, I packed my gear away and set off for the Great Salt Lake.

All morning I drove northwest through the most arid desert I'd yet seen on this entire trip. Texas and New Mexico had been dry, for sure, but at least their lowlands were filled with grass and scrub and cacti. Utah's were only rock and sand. Weird rock formations reared up beside the highway, mesas crumbled in the distance, and in between the road stretched ever on.

Half an hour out, I rejoined I-70 (for the fourth time this trip). It's funny to think that the same highway runs all the way from this desert through the Rockies and the flat fields of the Midwest to the lush green hills of Maryland. And if I turned around now... well, I'd have the same trouble crossing the Eisenhower Tunnel as before, but otherwise I could head straight home. I must admit, the thought held some appeal after all these weeks on the road: going back to a place where I could stop this constant alternation between driving, climbing, and scribbling notes, where the sun would rise and set to find me in the same bed... but really, I checked myself, I was almost to the end of this trip. It'd take just as long to straight-shot the interstate home as it would to continue on to Seattle by my park-hopping route. And which four days of driving would be the more interesting: redoing the Midwest in reverse, or seeing places like Idaho and Crater Lake for the first time?

Needless to say, I continued westward.

I left the interstate at Green River to follow US-191 north. The one-and-a-half-laner (one lane, but with frequent "passing zones" that never quite gave you enough time to get around the caravan of slow cars in your way) was, thankfully, light on traffic all the way to Price, a small, heavily-irrigated town home to the first modern gas pumps I'd seen all day. I filled my tank there, then continued northwards (and upwards) through the scenic but road-work-filled Price Canyon. The road rose all the way to Soldier Summit Pass, then began to descend... gradually at first, then faster and faster until I found myself shooting down through the high peaks of the Wasatch range. They seemed by far the steepest mountains I'd driven through, with near-vertical sides rising thousands of feet from the road's narrow valley to treeline and beyond.

Now, seeing as these mountains were neither tiny nor exceptionally dull, I bet you're wondering why this post qualifies as a "low point." The answer lies on their far side, in the Salt Lake Valley... or, should I say, the former Lake Bonneville.

The Great Salt Lake, you see, is at the bottom of a vast endorheic basin, one with no outlet to the sea. All precipitation that falls into the basin eventually drains to the lake, where it sits until it evaporates. Remember how the Great Lakes, despite their size and sealike properties, stayed fresh because of their outlet to the ocean? The Salt Lake is the opposite: all the salts and minerals dissolved in its inflow have nowhere else to go, so they stick around until their section of the lake dries up and deposits them (more or less evenly) onto the valley floor. This not only causes the lake's extreme salinity (12-24%, depending on which lobe of the lake you're testing, compared to 3% for seawater) but also the uncanny flatness of the valley around it.

At the base of the Wasatches, I was startled by how suddenly the land flattened again. There was no intermediate zone, no foothills to moderate between the mountains and the plains. It was as if something had steamrolled the valley... or, rather, filled it in with an even layer of sediment. That "something," I later learned, was the ancient Lake Bonneville, a massive lake roughly the size and depth of Lake Michigan that once covered the entire northwestern corner of Utah. It burst, as endorheic basins occasionally do, about 14,500 years ago, releasing much of its water into the Snake River drainage system in a cataclysmic flood. Climate change (the slow, natural sort) dried up most of the rest: the region became more arid as the globe warmed from the last ice age, shrinking Bonneville's water supply. As it dried, it split into several remnant-lakes, the largest of which is the present-day Great Salt Lake. Even today, the GSL's area fluctuates immensely based on precipitation levels, which often leaves shoreline developments stranded in the middle of a salt flat (and, at its extreme low, makes peninsulas out of each one of the lake's islands).

Despite all this, the lakeside corridor from Provo to Ogden is quite urban--lake-effect snows drop enough precipitation onto the Wasatches to melt and feed dense human development through the year. I joined the four-lane I-15 at the base of the mountains, then battled my way north from Provo through heavy traffic. At Salt Lake City I turned west onto I-80 and followed it along the shoreline to Great Salt Lake State Park:

The park features a marina, beach access, and, somewhat absurdly, campsites (for all you travelers lining up to spend your vacations on a shadeless salt plain?). Needless to say, only climate-controlled RVs had taken them up on the offer. I paid a token day-use fee, pulled in, and climbed out to look around.

The air was salty, as you'd expect, but not nearly as foul-smelling as I'd been warned. I walked past the "campsites" to a pier:

but it seemed all my fellow tourists (a roughly even split of locals and internationals) had the same idea, so I soon ditched the pier and climbed down to the beach instead: 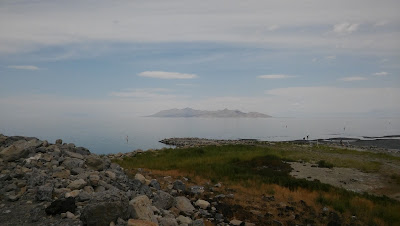 ...and here the smell kicked in. Salted carrion, definitely--perhaps from all the dead brine shrimp along the shore?

The lake, in its smoothness, matched the sky so well it was hard to tell just where the horizon lay. Bare mountain-islands jutted up from the water, half-faded by haze. All was still, save for the flies buzzing over the dead shrimp. It was quite peaceful, if you held your nose and ignored the itch of your slowly desiccating skin.

I dipped my hand in the water to tests its famed buoyancy (the saltier the water, the denser it is, and thus the easier it is to float on it). It didn't float noticeably better than usual... then again, it was hard to tell, since my arm was still bearing most of its weight. Given the state of the shore, I didn't feel like getting any further in--a good instinct, since the one hand I'd wet soon developed a salty crust that I had to wash off in the restroom. Instead, I sat down on the rocks and gazed out at the lake and its stranded shoreline developments:

and, behind the park, 9000-foot Farnsworth Mountain:

And that, in addition to note-scribbling, was pretty much all there was to do at that beach. I felt I should stay longer, after coming all this way, but what for? What is one to do with an unswimmable lake... or an unclimbable mountain, for that matter?

Little did I know how relevant the latter question would become.
<--prev | next-->
Posted by Stoat at 9:55 PM