On my way home from Mt. Washington in February, I detoured through Maine so that I could say I'd been there (not knowing I'd return in the summer). I didn't go far, just across the Piscataqua River to a town called Kittery. The town was nice enough (in a cramped, steep-roofed, narrow-streeted New England way), but what I really wanted was to see the sea.

And I did, at a local park called Fort McClary Memorial: 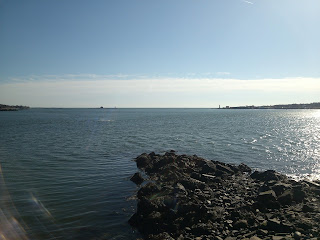 Quite the contrast it was from the ice-coated slopes of Mt. Washington. I dipped my fingers in the water, then sat down on the grassy bank to bask in the warm sun. 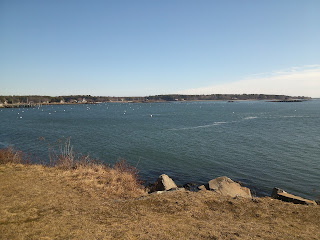 A few weeks after my arrival in Seattle, I found myself doing the same, only facing west rather than east. Frustrated with the endless parade of western-leg blog posts, I'd snuck off to the Olympic Peninsula for a few days' break from writing. I wound up at Kalaloch Beach 4, an hour's drive north from Aberdeen, right around sunset. 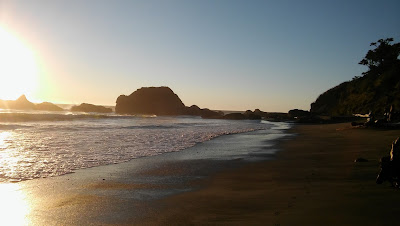 I'd been there once before on a family vacation (back when my three brothers and I still made a stair-step when lined up by age). As you'd expect, I snuck off while my mom was busy with the little ones and climbed that big rock looming over the sea. The top was flat, to my surprise, and covered in grass. I stayed up there for quite a while as seagulls swirled by on the sea-breeze, watching my brothers chase each other across the sand (both I and the gulls were glad they couldn't reach our aerie). But all things must come to an end, and as a child that end always seemed to be my dad shouting "LAURA! WE'RE LEAVING! GET BACK HERE OR YOU'RE WALKING HOME!" I plucked a stalk of grass as a souvenir (from the far end of the continent!), then carefully climbed down past the fierce Pacific waves to the shore.

This second time, the tide was high, so I couldn't make it out to the rock. Instead I admired it from the low boulders nearer to the shore, then walked back across the beach to where a small stream flowed out from the cliffs and dispersed into the sand. I sat down on the rocks above it (Mmm, salty! said the Lars) and stared out to where the sun met the horizon.

Well, I've done it, I thought. Coast to coast, Atlantic to Pacific, Gulf to Lakes, Canada to Mexico. I reckon I've passed through just about everywhere there is to pass in this nation.

Almost immediately, that thought rang false. What about all the roads I didn't take, all the side-destinations I rejected as too far off my route? I didn't even touch California, Arizona, Nevada, or Montana, not to mention the inset states. Heck, I've still got twelve high points to climb! 76% isn't nearly enough to sit back and write an epilogue for.

This continent, just like my old windowless room, holds mountains enough to keep me climbing as long as my strength lasts. Fellow hikers make great company, though the wilderness in solitude is a character of its own. Sustenance abounds, for the soul if not also the body, in the endless variation of this fractal world. And what could be more satisfying than to climb with the sun each day towards a glorious apex, then sink, as the shadows grow, back to the safety of the vale?

It is more than enough for me. 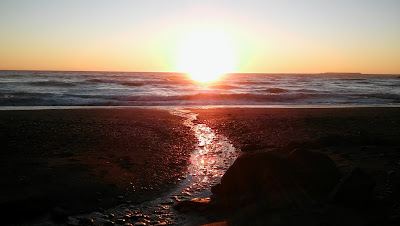