I doubted correctly. The only other person I saw all night was a dude in a white SUV who pulled into the loop around 5 am, set up a hammock in the trees, and slept. Hail, fellow illicit camper, I'd have called, but I didn't want to startle him into thinking I was the angry ranger I'd at first thought he'd been. 'Tis a strange shadow-community to which we belong. 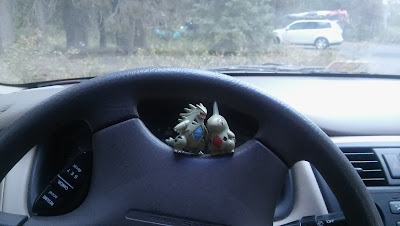 I woke with the sun, more or less. The morning was both cloudy and hazy, as if a fire was burning somewhere in this pine-tinderbox of a forest. But if it was, I couldn't see it through the trees. After decades of artificial protection, the forests around Crater Lake are unnaturally thick. Ecologists, you see, didn't realize until halfway through the park's existence that wildfires are a natural (and beneficial) occurrence in the fir forests of the Cascades. Prior to that, park policy had been to immediately extinguish all fires, whether natural or human-caused, which left nothing to thin the young trees and clear away dead wood. Natural fires are now allowed to run their course (though kept in check so that they don't escape the park or destroy its structures), but they've still got lots of catching up to do. Parts of the park haven't burned in over a century, including (I'd bet) this one.

It turns out I'd spent the night at the head of the Pinnacles Trail, a short trail built to showcase a line of pumice spires sprouting from the side of a steep river valley. Might as well take a look, I figured, since I'm here. So I rolled out of my car-bed and headed down the trail:

According to the signs along the trail, the Pinnacles formed after this valley was covered in ash by the eruption that formed Crater Lake. The water in the stream boiled and vented up to the surface, hardening the ash it encountered. Over time, the looser ash eroded away, exposing the vents.

Afterwards, I headed back up to East Rim Rd. to see the rest of the park. The road climbed once more to the rim of the crater, where I had my first view of the lake:

Thousands of years ago ago, the 11,000-foot Mt. Mazama stood in this place. Like the other grand volcanoes of the Cascades, its glacier-marbled flanks loomed large over the surrounding hills. The local Klamath peoples believed it to be the home of their god of the underworld, Llao. But then, 7700 years ago, Mazama blew its top. The eruption (remembered as a battle between Llao and Skell, the god of the sky) destroyed the mountain, leaving a 2148-foot-deep crater where its summit had been. Over time, the crater filled with rain and snowmelt, forming the body of water we now know as Crater Lake. It is both the deepest lake in the United States (1949') and one of the purest.

I continued down the road, stopping briefly at various other overlooks: 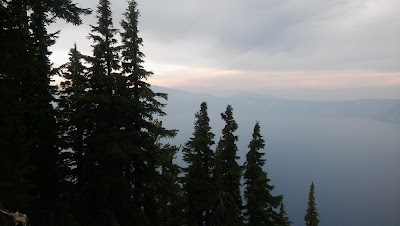 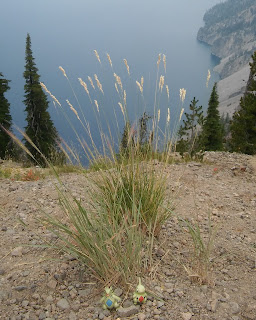 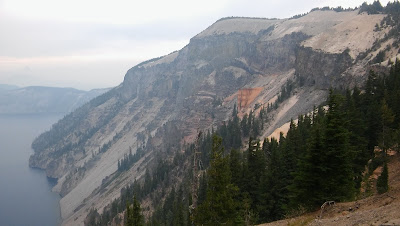 and arrived around 8 am at a picnic area below Mt. Scott. The mountain, a distant satellite cone of Mazama's, was largely spared damage from is eruption and is now the park's highest point. Since the high point of Oregon, glacier-capped Mt. Hood, is still well beyond my ability to climb, I figured I'd hike Scott instead. The pines above the parking lot were filled with large, noisy, white-and-black birds picking at their cones--Clark’s Nutcrackers, as I later learned.

The 2.5-mile trail began at the road: 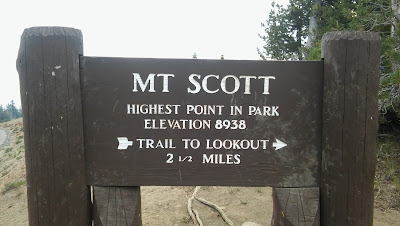 It ran along the edge of an ashy-soiled meadow: 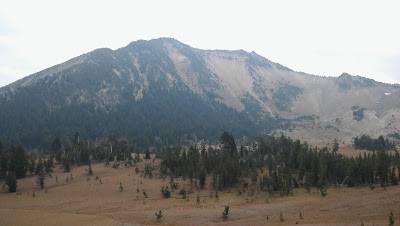 then ducked behind the mountain to ascend its gentler (though still quite steep) eastern side. I followed the switchbacks up through the pines: 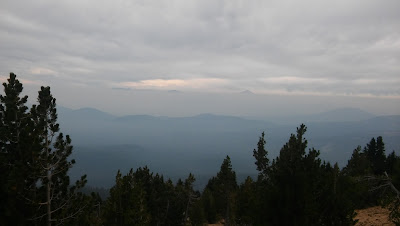 and over loose pumice scree:

At the bend of one switchback was an overlook towards the southeast:

A few switches later, I passed beneath a cliff of loose, ashy rock:

and paused so the Lars could have a taste:

As I rested there, a group of women passed by on the trail. They seemed amused by my Larvitar-posing (in a good way: "hey, that's creative" rather than "ha ha, what a weirdo"). I quickly passed them back once I got going again.

The trail ran briefly along the mountain's ridge:

then up towards the summit. I'd hoped the abandoned fire tower up there would offer some nice views, but it was closed off from the public. No matter, though--the views were great even from the ground. Crater Lake lay to the west:

the Cascades to the south and east: 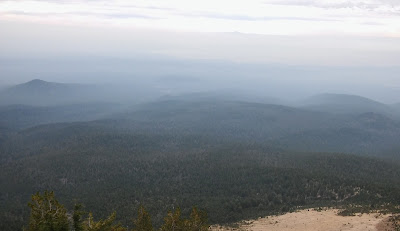 and directly below was Mt. Scott's glacial cirque:

The ladies I'd passed soon joined me at the summit. As we chatted, I learned they were from Missouri. I mentioned that I'd been to Taum Sauk, and the whole highpointing story came out. They were impressed that I'd come so far and climbed so many mountains alone.

I took their picture at the summit, then headed down.

The descent was uneventful, aside for a brief break for pinecone-play: 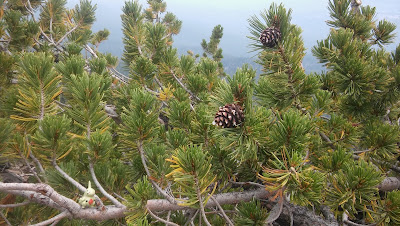 and a visit from a ground-squirrel:

I lingered afterwards in the parking lot to watch the nutcrackers pick at the pines. Their cries sounded a lot like the blue jays back home (they're both members of the corvid family, as I later learned). But time was passing, and I had a long drive ahead of me if I wanted to reach Seattle that night, so I pulled myself away from the birds and continued up the park road.

I stopped at a few more overlooks to see the lake:

and the temporarily-off-limits Wizard Island:

then drove on past West Rim Dr.:

and out of the park.

From there I followed OR-138 down (literally) from the Cascades. They hadn't seemed quite so high when approached from the mile-high eastern plateau, but it’s a long way from 7000’ to sea level. The road was narrow and twisty, lined at first with pines, then, below 3500', with the first deciduous trees I'd seen in several weeks (not counting the upper Sandias). It descended deeper and deeper into a narrow river valley (the North Umpqua, I later learned), with the Cascades looming clifflike above it. It was all quite beautiful, I must say--and the two separate pair of RVs I wound up stuck behind, all four hauling cars, gave me pleeeeenty of time to contemplate that beauty at 15 mph below the speed limit. I really can't curse thank them enough.

The land below the mountains was savanna-like: yellow fields dotted with copses of dark trees. I hit I-5 at Roseburg and followed it up the Willamette Valley through the afternoon. Though the countryside stayed largely rural, I could tell I was on a coastal highway again by the heavy traffic and constant passing-games required to keep a steady speed. I hit Portland around 4:30 and spent the next hour and a half inching my way forward through its rush-hour traffic. Fed up, I pulled off for a brief rest at this place that billed itself as the "World's Classiest Truck Stop":

then continued across the border into Washington.

On I drove through the sunset. I passed Olympia and Tacoma in the dark; Mt. Rainier, Washington's high point, was no more than a shadow to the southeast. The day's traffic had dissipated by the time I reached Seattle proper. I veered onto I-405 and followed it up the eastern isthmus to Bellevue, where I was greeted by the lights of a different set of skyscrapers. My friend's temporary apartment was deep in the city--a shock to my system after so much rural traveling--but at that point I was ready to crash on any horizontal surface that would take me.