Side Trip: Craters of the Moon National Monument (~6000')

And so I headed north again on I-15... and before I knew it, I was in Idaho. The Spud State greeted me with a beautiful broad valley lined with moderate mountains covered in grass and pines:

It wasn't quite what I had expected... then again, my entire prior knowledge of Idaho consisted of potatoes and Mt. Borah, so I didn't really know what to expect. I read up on the state that evening as I dined in Pocatello: apparently it's known as the Gem State due to the immense variety of gemstones and minerals found there. It's also home to Hell's Canyon, the deepest gorge in the United States (out of my way, unfortunately), and quite a bit of recent volcanic activity.

If you've been following along on a map, you might be wondering why I veered so far north on I-15. The direct route to the coast from the Great Salt Lake runs through Nevada rather than Idaho, and if all I'd wanted was a glimpse of the latter, I could have gotten that just as easily westbound on I-84. But out of all the western highpoints I'd hoped to climb this summer, Idaho's Borah Peak was the one I'd most looked forward to. Even if my lungs wouldn't let me summit, I wanted to see it with my own eyes--and thus the Lost River Range, north of Arco along US-93, was my destination.

But I couldn't quite make it there tonight. The hotels in Pocatello were pricey, so I drove another 30 minutes northeast to North Bingham County Park, a small park along the Snake River whose website promised both tent and RV camping. I arrived to find the tent site(s?) were unlabeled, so I pitched my tent on an unoccupied spot of grass, paid my fee, and settled in for the night, hoping I wouldn't be evicted midway through.
(I wasn't, of course. Idahoans are far too nice to do that.)

I woke after a cold night's sleep to a bright sunny morning:

packed up, and headed out. The campground below Borah Peak was only two hours' drive from here, so I had some time to kill. The most interesting thing in the surrounding area seemed to be this national monument called Craters of the Moon a short ways west of my route. I figured I'd check it out.

And so I followed the two-lane US-26 straight across the broad Snake River Valley. For most of the way it was hard to remember I was in a valley at all: the land was as flat as the Dakotas, its mountain-walls lost to the distance. Every so often a massive butte emerged from the haze, rising thousands of feet above the open range. I later learned these were volcanic remnants, just like the mountains I'd seen in eastern New Mexico. Along the way I also passed the Idaho National Laboratory, a major site for nuclear power research... but, like Radium Springs, I felt this was a place best left unvisited. I made a left at tiny Arco, the central metropolis of this swathe of nothing (which also bears the distinction of being the first nuclear-powered town in the world, thanks to the INL), and continued west down 26 towards the Craters.

The land around the monument was unassuming: just more empty sagebrush plains:

...until I pulled into the visitor center and found myself facing a field of scorched volcanic rock:

I parked and walked over for a closer look: yep, that stuff was igneous. The Lars were quite interested, as you can imagine:

At the visitor center I learned that this place sits atop a series of deep fissures known as the Great Rift. For the past 15,000 years, magma has been oozing up through the earth's crust and spreading across the valley, creating a vast expanse of lava fields, cinder cones, and volcanic craters. Its name was inspired by the first geologist to study the region, Harold Stearns, who likened it to the surface of the moon. The most recent eruptions in the area occurred around 2000 years ago, but geologists believe we're due for more in the near future.

Intrigued, I entered the park proper--luckily, it was fee-free day here, too--and headed up the loop road that circled its main attractions.

You wouldn't think anything could grow on lava, but a surprising amount can:

Since any rain that falls on the Craters drains straight through their loose volcanic soil (when it doesn't evaporate in the 150-degree heat of its black rock surface in summertime), these plants are all adapted for extreme aridity. Bitterroot, monkeyflower, and limber pine colonize the lava fields, breaking down the rocky surface like crabgrass on concrete. The plant matter they shed turns to soil, preparing the way for the rest of the ecosystem to return.

Further on, I abandoned my car to climb Inferno Cone, one of the park's largest (and newest, by the looks of it) cinder cones:

In a sense, I was walking on air: the ashy scree beneath my feet was formed from gaseous lava that spewed from a vent atop the Cone, then cooled, hardened, and broke apart as it fell.

From the top I looked across the valley to Silent Cone:

then to the next stop along the road: the spatter cones: 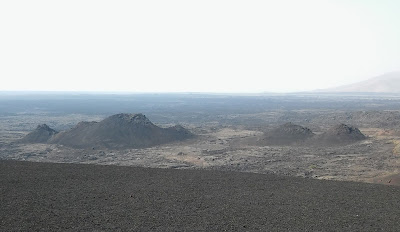 These rough, irregular, oozy-looking cones had coalesced from globs of lava spat out by their parent vents. I climbed the paved path to the top of one cone, from which I could see down into its empty center: 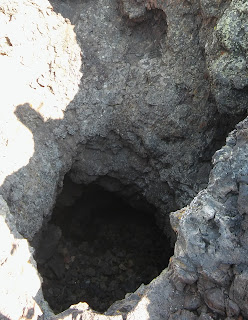 Though all these lava structures may look sturdy, they're actually quite fragile. A stray step can easily shatter a brittle spatter-lobe or crush cinder-stones to dust. In fact, the two spatter-cones beside the road were twice their present size before decades of untrammeled tourist access ground them down. Once the park's management realized what was happening, they blocked off the mouths of the cones and built paths to guide visitors' footsteps, but it was too late to reverse the damage already done.

Naturally, spatter-cone turned out to be the one flavor of igneous rock LarLar liked:

but MomMom and I yanked him off the cone and pulled him away down the North Crater Trail before he could make a dent in it.

This trail wandered up through the hills: 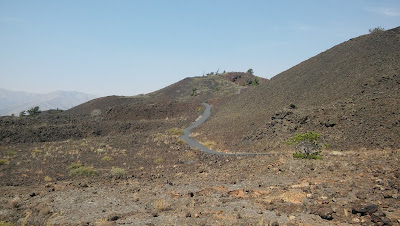 to the rim of a massive crater formed by a collapsed volcano.

I stood there for a while as the wind whipped over the rim:

then headed back to the car, lugging along a dejected LarLar.

Further down the loop, I came to the turnoff for the Tree Molds Trail. The eponymous tree molds, my map informed me, are imprints of ancient trees left by forest-engulfing lava flows--sounds cool, right? I followed the side road south to the head of a quiet, secluded, 1.8-mile trail. It took me up through some forested hills, then down along the edge of a wide plain of lava flows:
Up close, the lava sparkled iridescent red and blue:

The tree molds themselves were somewhat underwhelming. I'd expected them to be, you know, tree-sized, but they turned out to be less than a foot across. I'd have walked right past them if they weren't marked with a sign.

All the same, it was a lovely walk. I reached the end of the maintained trail:

And that was about it for Craters of the Moon. There were some lava-flow caves I could have seen, but caving's not really my thing, plus I was getting kind of sunburnt out there on the lava fields. So I looped back around to the road, retraced my route to Arco, and headed north up the Lost River Valley towards Borah Peak. 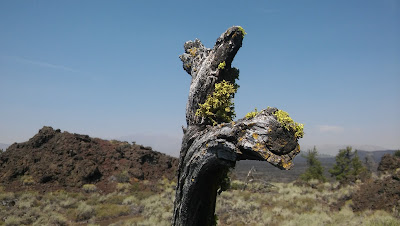 Email ThisBlogThis!Share to TwitterShare to FacebookShare to Pinterest
Labels: Craters of the Moon, ID, lar, side trip, who needs potatoes when you've got volcanoes?, yummy volcanoes