I returned to Pinkham's Notch shortly after 8 AM the next morning. The skies above the Presidentials were much clearer than they'd been the day before, so clear that I could see almost all the way up Washington from the road. Once there, there was no need to repeat the past day's deliberations; I packed my bag, strapped on my gaiters, and headed up the trail towards Tuckerman's Ravine. Following the recommendations of a map I'd found in the hostel, I planned to ascend via the headwall of the ravine, then descend the same Lion's Head route I'd taken last February. 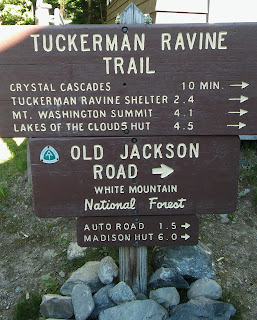 That first wide stretch through the woods (the "trunk line," so to speak, from which all the summit trails branched off), was much steeper and rougher than I'd remembered. Or perhaps it was just easier to crunch my way up a smooth ice path than to stumble over the uneven rocks exposed by melting: 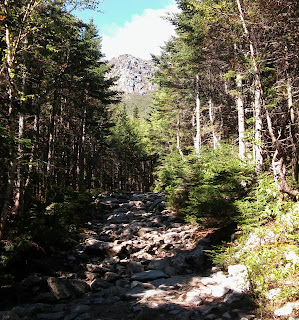 Either way, that bit was just a stroll in the forest compared to what came next.
The mountain walls drew nearer as I passed the turn for the Lion's Head trail. Paradoxically, the trail flattened out here... but oh, was I to pay for that brief flatness. Shortly after, I passed the ranger hut that marked the entrance to the ravine proper. A bright orange sign warned of avalanche danger: 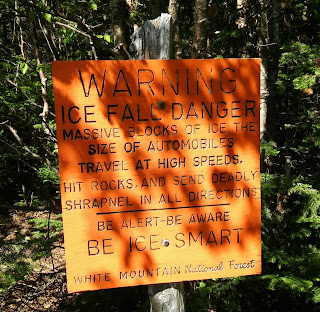 Scary, eh? But mountaineering's all about taking justifiable risks, and I figured it was safe to ascend the ravine on that lovely June day.

A minute later, a trailside pond offered me my first view of the headwall:

and yes, those white blobs are snow, the last remnants of the winter's dozen-foot-deep snowpack.

As I picked my way through the rubble and scrub of the lower ravine, I caught up to a father and young son who were taking the same route up to Washington. I passed them at first, but they kept close behind... and passed me back when I stopped for a breather halfway up the headwall. I trailed them the rest of the way up that sadistic Stairmaster of a trail, climbing beneath imposing cliffs:

and past the snowpiles I'd glimpsed from below: 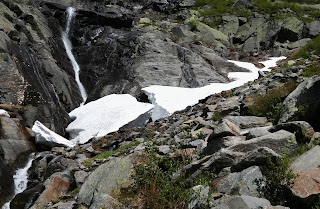 Though I sweated and strained, that kid bounded up the rock-chunks above me like a beast. Oh, to be young again...

After all the stories I'd heard of people being blown off the mountain at the lip of the ravine, I was expecting the wind to pick up quite a bit as we neared the top... but it didn't, aside from a few stray gusts. As I learned at the summit, the winds were blowing from the northwest that day, and both the trails I climbed were on the mountain's southeast side.

I looked down the ravine: 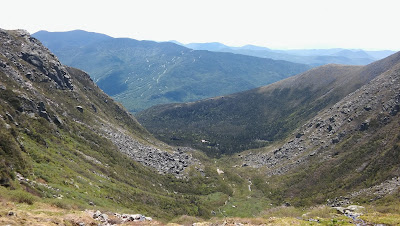 then continued up the mountain on the spur trail to the summit.

Into the clouds I climbed: 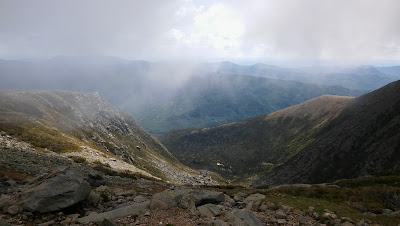 up a seemingly endless slope of rough, gray-black, lichenous rocks. Now I know why they call Washington "the old rock-pile." Funny how Mansfield, just a state away, was one smooth slab, but this one was all battered to bits. Its rock chunks made for better footing but required a lot more effort to climb.

After nearly a mile of calf-straining scrambling, I arrived at the summit:

The difference in that place from February to June was surreal. It turned out that the parking lots were below the wooden stairs (then: invisible beneath the ice; now: packed full, with spot-vultures circling), and that the observation-deck-like structure next to the observatory was, in fact, an observation deck. 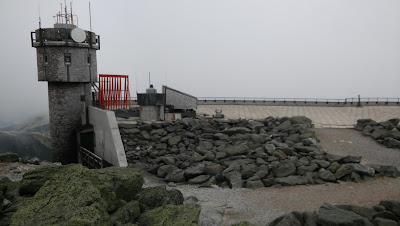 The summit itself was encrusted not in ice, but in underdressed tourists who screamed each time a gust hit the peak. Come on, I thought as I picked my way through the crowd to the summit-sign.

This here is Mount-freaking-Washington, home to the worst weather in the world--it's your own fault you didn't bring a sweater.

At the sign, I crossed paths once again with the father and son. We congratulated each other on the ascent (it was the kid's first time up, I learned, at the ripe old age of 9), and took each others' picture by the sign. As the dad returned my phone, the cog-train arrived (yes, there's both a railroad AND an auto road up Washington) and disgorged another pack of screaming tourists. 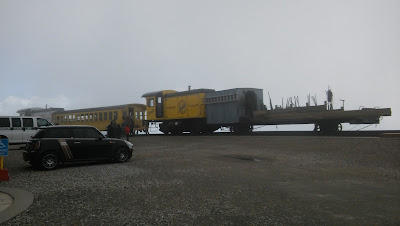 rendering the place far too crowded for my liking. I took a few last looks at the gray sky and grayer rocks, then headed down.

It wasn’t long before I dropped below the clouds. Bit by bit, the mountain unveiled itself, until I found myself looking out onto the long flat rugged buttress of Boott Spur. The muted hues of its tundra were even more beautiful than its monochrome winter coat: 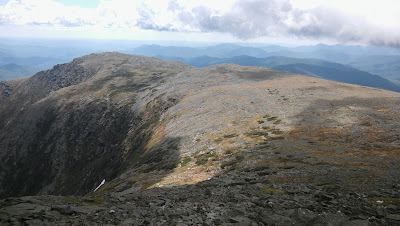 I paused not far from there to just to watch the clouds over the plateau between Washington and the Spur. They hung low like a ceiling and swept through the gap as fast as the eye could track, driven like frightened deer before the invisible winds. Beyond, I caught a glimmer of light on the Lake of the Clouds. Water atop Washington--now that would be a strange sight. I checked my map; the Lake was only a mile away. The detour tempted me... but a mile on Mt. Washington meant nearly an hour's hike, and I'd either have hike another mile back to this trail or skip the Lion's Head descent. Maybe next time, I decided, and continued on.

I turned left at the junction of the Tuckerman's and Lion's Head trails and began in earnest my second descent, half a year after the first. Some landmarks I remembered, but some were lost to my snow-addled memories. Split Rock at first disappointed the Lars:

but a massive crystal vein nearby made up for the missing ice:

The crack in the rock, like much of the rest of the trail, was a lot tricker to climb down without a five-foot cushion of snow. Winning the "most different" award, though, was the Alpine Garden. The krummholz of the Garden had barely broken through the snowpack in February, but now it looked like an actual forest:

And at the far edge of that forest was the Lion's Head, the outcropping for which the trail is named. Perched at 5000' on the right shoulder of Tuckerman's Ravine, it commands a marvelous view down into the abyss:

back to the summit:

and across to the headwall, 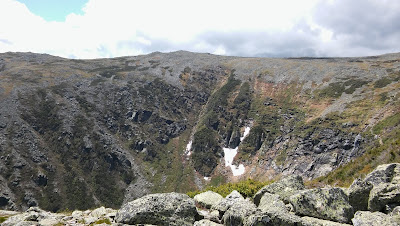 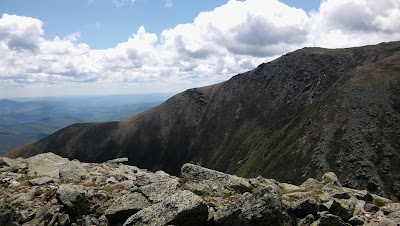 and the valley below: 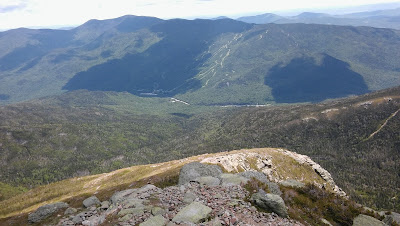 So marvelous, in fact, that I took an awfully long break there and might not have come down at all if I hadn't run out of water... but I did, right about there, so I had to. 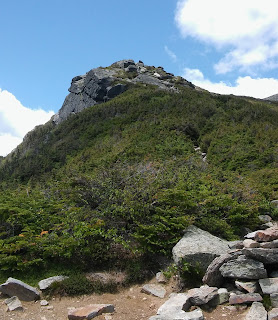 The stretch between Lion's Head and the treeline was honestly a lot easier in February, when I could slide down the snow slope rather than strain my knees stepping down giant rocks. Then again, the windchill was above freezing in June, so I guess I can't complain. The part just below the treeline (after the summer and winter routes diverged) was also surprisingly steep--they even put in a wooden ladder at one point so us casual hikers wouldn't die downclimbing a wet rock face. How considerate.

After a mile or so of that, I was back at the Tuckerman's trunk-trail. I started back down the hill, my aching knees glad to be almost done... but then I got an idea. A wonderful, awful idea--to detour around to the winter route of Lion's Head and see what it looked like now.

Not much, I realized when I got there. The trail was clearly not intended for use without a snowpack: fallen logs leaned at odd angles across the path, plants sprang up from the dirt, and stray branches swiped at any who dared pass. But I wanted to revisit that cliff where we roped up in February, so I headed up anyway past the "TRAIL IS CLOSED, MOVE ALONG, NOTHING TO SEE HERE" sign and into the brush. It wasn't that hard to follow the trail through the woods: the blazes were still posted, if a few feet higher up on the trees than normal, and the logs and rocks below the trail were scarred with crampon marks. But the sign, it seemed, was right: there really was nothing to see here:


And so, with a dehydration headache setting in, I turned around and headed back to civilization.

At least, that was my intent. I wound up taking a shortcut down a grown-in snowmobile track that spat me out by some storage cabin that the map seemed to think was right next to another trail leading back to the lodge, so I tried to bushwhack over to it, but I couldn't cross the creek in between and instead wound up backtracking over a mile to the Tuckerman's trail. By that point I was so turned-around that I started up that trail the wrong way and would have hiked clear back to the Ravine if I hadn't run into that father and son from the summit. Going back for more? they asked--no, definitely not, just lost.

Mildly embarrassed, I spun around and dashed back to the lodge with visions of water-fountains dancing in my head... stopping only to re-take that pretty creek photo I'd never been able to recover from Tracy's phone:

So, that was it: the dreaded Mt. Washington had taken it easy on me once again.

I rehydrated at the lodge, then drove back to Conway for some well-earned pizza and sleep.