After a brief night in a disgusting motel in Clifton, MA (the cheapest I could find at the last minute), I headed down I-395 to snag my last high point. The highway was lined with bright broadleafed trees--I'd left the north woods behind in Maine--and traffic was light for a Saturday morning. I drove for several minutes through extreme-eastern Connecticut, then exited onto SR-101 and made a beeline for the border.

Jerimoth Hill was just a few minutes past it, atop a rise in the road: 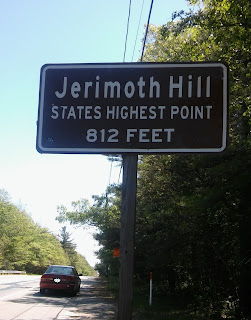 Trees sealed off most of the view, but a glance down the road-cut revealed the distant hills of Connecticut:

A path beside the sign led into the piney woods atop the Hill:

I grabbed my camera and the Lars and walked right in.

Ten years ago I could have been shot for doing that.

Jerimoth Hill, you see, has a long and thorny history of access issues for highpointers. The summit was owned for decades by Brown University, which used it as an astronomical observatory (and technically only allowed university personnel on the land--liability, y'know). The real issue, however, was the owner of the adjacent property, whose land had to be crossed in order to reach the high point. This fellow refused all access requests from highpointers and acquired a nasty reputation for reporting them to the police as trespassers--and, when that failed to stem the tide, for chasing them off the property at gunpoint. Fortunately, upon his death in 2005 the land was bought by more-sympathetic owners, who eventually ceded the right-of-way to Rhode Island. The state bought the summit off Brown in 2014, and it's been entirely accessible to the public ever since.

I had the place to myself that morning, aside from a few catbirds and chipmunks. The brief path led me past a USGS marker: 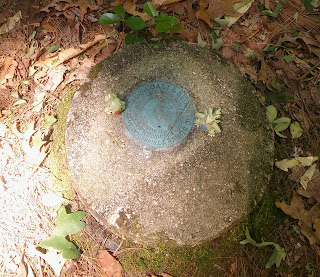 then on to the high point itself:

I signed the summit register, then flipped through the entries to see who else had been there: a 50/50 split of locals and hardcore highpointers, it seemed. I wasn't the only one who'd stopped by on the way south from Katahdin--or the first to facetiously compare the two.

I lingered for a while, basking in the quiet stillness of the woods before my long drive home. I'd spend the rest of the day reprising the return-trip of my first visit to the Northeast: west on I-84 to I-81, then a long diagonal through Pennsylvania and a quick jog back east on Maryland's I-70. I'd pass through an hourlong traffic jam, get price-gouged on gas in the Alleghenies, and eventually give up on finding a KFC north of the Mason-Dixon line. I'd cross that last bridge over the Potomac and sweep down into the sprawl of Northern Virginia, its skyscrapers lit up like constellations in the darkening sky...but all in good time. The hills were in no hurry--why should I be? 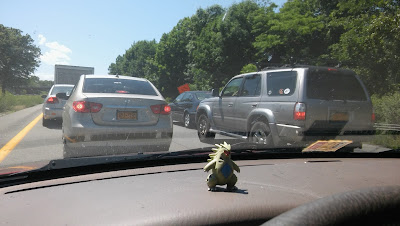